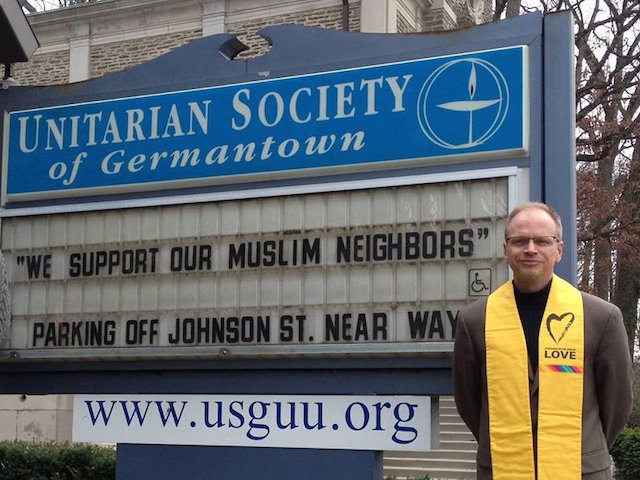 A local minister left his classic revival stone church in Mt. Airy and traveled 2,377 miles to Arizona on June 4 to help defend a geography professor facing two decades in jail for attempting to aid an immigrant in need of water and first aid.

The local minister, the Rev. Kent Matthies of the Unitarian Society of Germantown, joined other clergymen and local citizens in going to a court trial in Tucson. The Arizona State University professor, Scott Warren, was charged with a felony for various offenses in helping an immigrant survive desert heat in January 2018.

Matthies went to the trial in the Federal District Court in Tucson that resulted in a mistrial after jurors failed to reach a verdict in two attempts. The judge, Raner C. Collins of Tucson, said that both sides would negotiate in a conference about how to proceed on July 2.

Warren was indicted on one count of conspiring to smuggle two central American men, Kristian Perez-Villanueva and Jose Arnaldo Sacaria-Goday, into the country and two counts of harboring them in a structure in Ajo, Arizona, also known as “the barn.” The structure has been used as a staging area for humanitarian efforts.

After the decision of the mistrial was read, Warren thanked his supporters who filled the courthouse to capacity.

Back in his church office on Lincoln Drive in Mt. Airy last week, Matthies said he was supporting a group Warren works with called “No More Deaths” in Arizona. He said the Unitarian Service Committee was so much in sympathy with the organization’s mission of saving the lives of immigrants crossing the border that they financially backed his trip to Arizona because it is a “local problem that affects us all.”

Matthies, who leads a congregation of more than 200 people, said he felt obligated to go to Arizona to defend Warren.

“We are watching attempts to criminalize kindness” he said, “and we can’t allow this to go unopposed.”

Matthies said that because Warren is a professor of geography, he would know that when safer crossing areas from Mexico to the United States are becoming blocked by authorities, the only paths left are unsafe ones through the desert where fatalities are far more common.

What No More Deaths has tried to do is provide immigrants a map showing them a safer route through the desert and has provided water and first aid kits. The group would leave its humanitarian supplies in the dessert on the paths the immigrants would take. Matthies said border control agents have been accused of dumping the water and destroying the kits.

“Warren is a volunteer just like all the other No More Death members,” Matthies said.

He said many of the immigrants are forced to leave their homes by the steady stream of drug traffickers and gangsters using their towns as a road to transport drugs into the United States.

“The immigrants are forced to travel without sufficient water or food because they couldn’t possibly carry as many supplies as they would need,” he said. “In some cases, the immigrants must go through mountains without clean water.”

Matthies said he and the other protesters felt obliged to be heard.

“Due process is being denied to immigrants,” he said. “In some places such as Tijuana, the largest entry point, there is a 40-day waiting period to be processed by border officials, which is a violation of rules set up during World War II when Eleanor Roosevelt helped establish a rule that people seeking asylum have to be processed quickly.

“We see it as an attempt to criminalize kindness,” Matthies said, “and it can’t go unopposed. If Warren is convicted, people in neighborhoods where people are starving may be forced to look for documentation before offering medical support.”

And this could lead to more deaths.

Matthies said he participated in the protest because “people who died a violent death in the 110- degree temperature in the desert down there are mainly poor people who are being denied their due process and “we can’t let this happen.”