Local writer's classic book on an important decade of design

“Populuxe”, published in 1986 and written by the Philadelphia Inquirer art critic Thomas Hine is a deep dive into American life as it was being lived  in the mid 1950’s to the mid 1960’s.

Local writer's classic book on an important decade of design 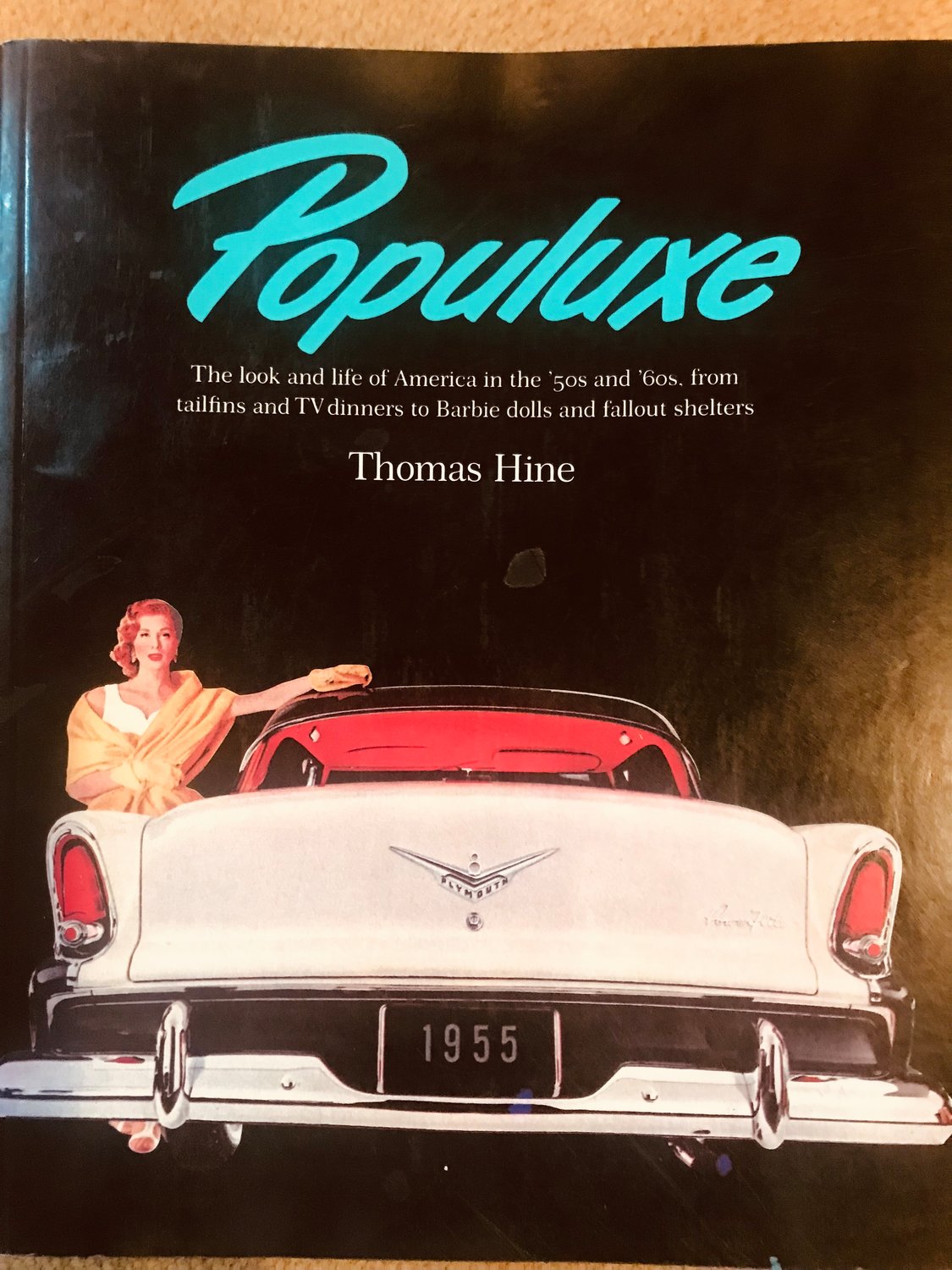 “Populuxe” is an engaging read on all things design related.
Posted Thursday, January 6, 2022 12:00 am
by Patricia M. Cove

Books are always a welcome gift at the holidays, and this year I received a terrific one. “Populuxe”, published in 1986 and written by the Philadelphia Inquirer art critic, Thomas Hine, is a deep dive into American life as it was being lived  in the decade spanning the mid 1950’s to the mid 1960’s.  The term “populuxe” is a portmanteau of the words popular and luxury and describes those 10 years as one of history’s greatest shopping sprees, based on the premise that industrialization gave many Americans the opportunity to “live their dreams while still meeting their budgets.”

The book is divided into sections that cover numerous areas of living from modes and shapes of transportation to the invention of the Barbie doll, and how the specific features of design become significant and replicated within various aspects of popular culture. The profile of World War II fighter planes, for example, became the inspiration for the Cadillac’s oversized tailfin, which led to the more modified design of the 1955 Chevy, which affirmed that even mass market buyers could afford a little bit of luxury.

“Shapes” within design become a repeated element.  Take women’s shoes, for example.  Hine points out that in 1954,” women’s shoes were rounded and compact in their appearance.  But in 1956, a shoe of the same size was noticeably longer.  The toes were pointed, and in profile, the foot rose upward in a continuous line, “just like a car with tailfins.”  A shoe’s drama became even more evident by making the heel narrower and “more spikelike”.  The sleekness of the shoes carried right over to a woman’s ensemble. The asymmetrical silhouette in the form of a sheath dress became de rigueur for the fashionable woman.  The cylindrical profile of the sheath then caught the eye of appliance and furniture manufacturers, where it could be found incorporated in the handle of a refrigerator or the legs of a Danish Modern sofa.

Another shape that actually becomes one of the most characteristic of the period is the pointed boomerang, a shape that was repeated on everything from fabric patterns to coffee tables.  The parabolic curve, a more pointed version of the boomerang, appeared in architecture,  as well as furniture design. One of the more well known pieces was the Hardoy, or butterfly chair.  It was basically four large wire hairpins that supported a “sling” that formed the seat and back.  Accent tables were also built in a boomerang shape.  With their narrow tapered legs and aerodynamic top, they could rest quite comfortably within a kidney or “amoeboid” shaped sofa.

Space age imagery became the rage.  The “starburst” became popular when the Ford Motor Company used it as its new symbol for its top- of -the- line Lincoln.  The starburst morphed into the “asterisk,” which became frequently used in advertising, and may have led to the ubiquitous “ball clock.” Anyone of a certain age would remember having this giant, twelve armed asterisk with arms punctuated with balls, hanging backless on their living room wall.

There is a significant section of the book dedicated to the architecture of the period, highlighting Morris Lapidus and Mies van der Roh, whose principal effort was to incorporate materials of machine age construction in steel and glass.  Economically conservative buildings were important. “Because nobody cared very much about architecture, as architecture deals best in collective expression,” Hines notes. “This was a time of private indulgence.”

From the Populuxe architecture of Mies van der Rohe, Hines takes us to what he calls “the greatest of all pieces of Populuxe architecture,” Disneyland.  It is described as a symbolic downtown for Los Angeles, and a recapturing of a sense of small town America.  But I might describe it as a turning point in which Americans, rather than looking inward, start to understand that it may well be the experience of design rather than its elements, that becomes the impetus of the next “new” thing.

I have just skimmed the surface of  this engrossing read.  Thomas Hine has successfully combined lifestyle, design, and the influential features of society, economy, industry and politics into a definitive and captivating timeline. How does the Populuxe era end?  You will have to buy the book to find out.  Although my sister-in-law found this book in a vintage store in Lancaster, I see that it is available on Amazon. It is guaranteed to hold the attention of all design and architecture professionals as well as those who are riveted by all things design and their connections to each other.

Patricia Cove is Principal of Architectural Interiors and Design in Chestnut Hill, and can be reached through her website: patriciacove.com.

Decorate the holidays with a distinct and personal touch