The Presbyterian Church of Chestnut Hill was the site of two inspiring concerts Oct. 2 and 3. 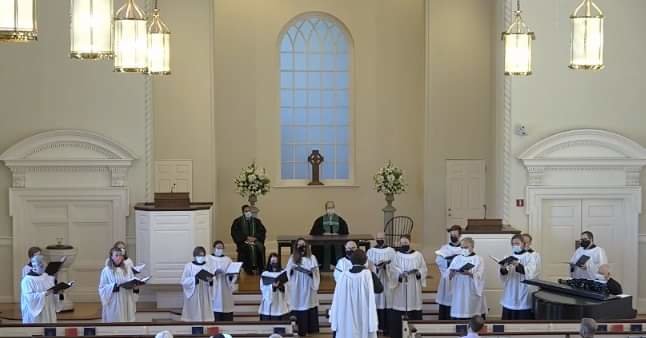 The Presbyterian Church of Chestnut Hill was the site of two inspiring concerts Oct. 2 and 3. Both featured beautiful singing heard within the sympathetic resonance of the main sanctuary’s acoustics, and both were attended by an enthusiastic audience that seemed to relish the opportunity to hear “live” music-making “in-concert” for the first time in many months.

The first was Saturday afternoon’s program, “The Funny Bone,” presented by Lyric Fest. The second was “Cantatas and Chamber Music,” with the professional core singers of the Church’s own Gallery Choir under the direction of Daniel Spratlan.

It would be difficult finding two more diametrically different programs of vocal music, yet both featured distinguished local musicians, both were eminently well constructed, and both were notably well performed.

“The Funny Bone,” which proffered selections of vocal music meant to tickle that imaginary yet seminal appendage of the human spirit, was directed from the congregation’s vintage Steinway grand piano by Laura Ward, a Chestnut Hiller and a member of the congregation who is also an internationally renowned accompanist. Her singers included soprano Jennifer Aylmer, mezzo Blythe Gaissert, tenor Andrew Fuchs and baritone Johnathan McCullough. The roster of music boasted world premieres by Lori Laitman, Juliana Hall, Karl Hinze and David Shapiro. Other selections included tunes by Irving Berlin, Benjamin Britten, and Harold Arlen & Ira Gershwin.

Among my favorites was “Advice to Youth,” a world premiere featuring music by David Shapiro set to a text by Mark Twain and performed by Johnathan McCullough. Twain’s tongue-in-cheek advice to young people on how to live their lives was spiced with his famous biting cynicism, and Shapiro (a noted Chestnut Hill composer with a national reputation) set the lyrics with a deft hand for angular melodic lines, tart harmonies and jagged rhythms. Ward provided an energetic accompaniment for McCullough’s unaffected yet dramatic interpretation.

Other gems in the recital were Jennifer Aylmer’s saucy rendition of Berlin’s “Yiddisha Nightingale” and snappy delivery of Arlen/Gershwin’s “You’re a Builder Upper,” McCullough’s natural phrasing in Britten’s “The Foggy, Foggy Dew” and his unforced diction in “Neurotic and Lonely.”

Truly “as always,” Ward’s work at the Steinway was dazzling in its tonal and dynamic variety, memorable for its sensitive yet secure support of each vocalist, and breath-taking in its sheer pianistic artistry.

Daniel Spratlan’s Sunday afternoon concert was built around the “Missa Osculetur Me” of Orlando di Lasso (1532-1594), one of the supreme masters of the High Renaissance. Like Palestrina in Italy, Victoria in Spain, and Tallis and Byrd in England, the Franco-Flemish di Lasso specialized in unaccompanied sacred choral polyphony.

Like many of his predecessors and contemporaries, di Lasso often used pre-existing secular works for the thematic inspiration of his settings of the Latin text of the five movements of the Ordinary of the Catholic Church’s Mass. Sometimes openly, other times cleverly hidden, the careful listener can find the theme of a popular song, for instance, in di Lasso’s musical fabric for the “Kyrie,” “Gloria,” “Credo, “Sanctus & Benedictus,” and “Agnus Dei.” It’s a liturgy virtually abandoned by the post-Second Vatican Council Church in America, so this was a rare chance to hear it.

Works such as this are tremendously difficult to sing. Not only must they be performed without accompaniment, but they are voiced in a medieval modality based on the seven modes of Gregorian Chants and not in the major/minor tonality that became the norm in the post-1600 world of Baroque music. Even so, there was nary a hitch Sunday afternoon. The “Missa Osculetur Me,” as well as the other pieces on the program – by Josquin, Ockegham and Champion – were performed at a professional level rare among church choirs.

Best of all, the concert was sung in the main sanctuary of Chestnut Hill Presbyterian Church – a colonial revival space of transcendent acoustical resonance.