Try out your own hamantaschen at home this week with one of my favorite recipes from the City Tavern Baking and Dessert Cookbook. 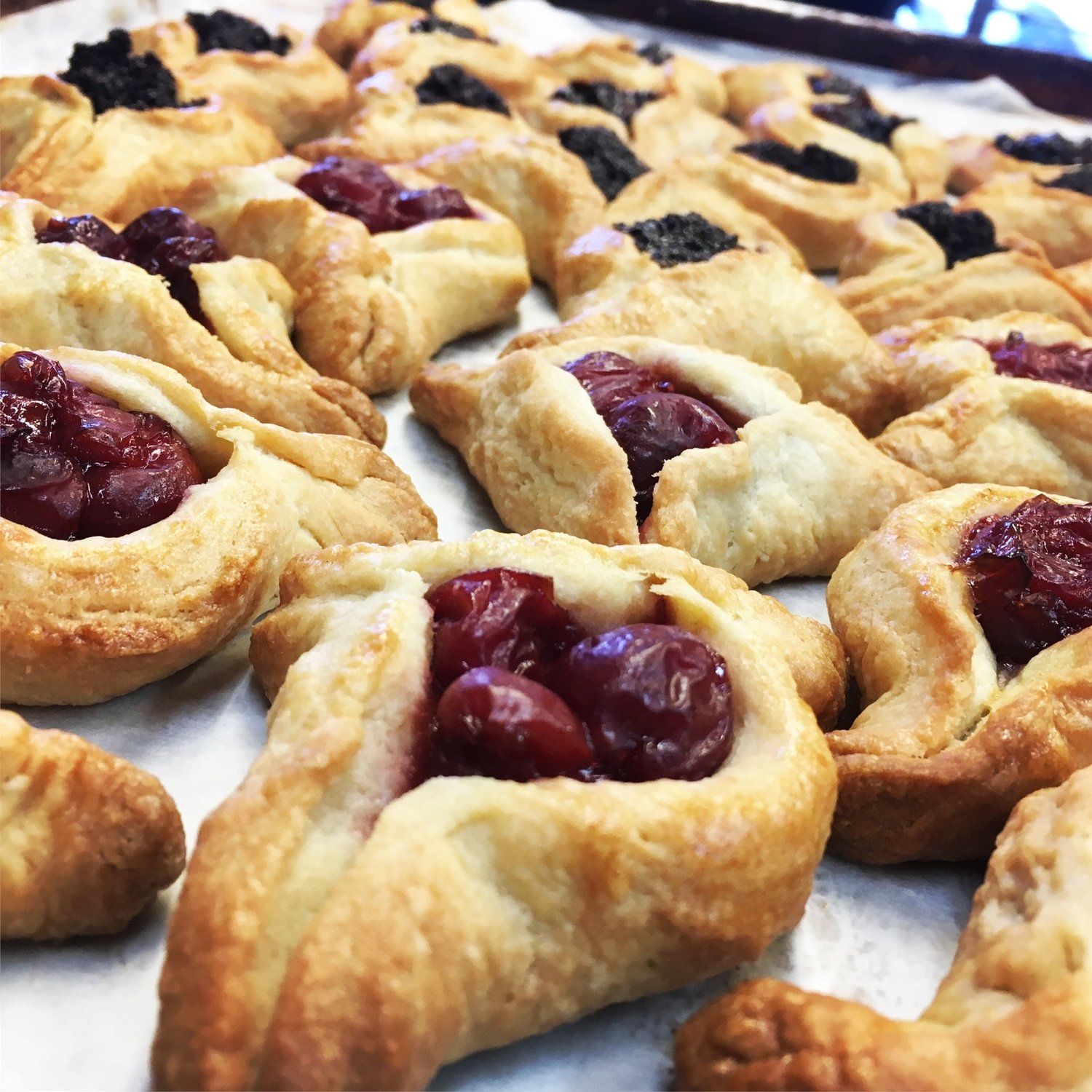 Hamantashen made at the Night Kitchen Bakery by Amy Edelman.
Posted Thursday, February 18, 2021 11:10 am
by April Lisante

Growing up just outside of New York City, bakeries were on just about every street corner. French, Italian, Jewish. It wasn’t hard to find fresh breads, cakes and even the more obscure baked goods that, as I grew up and left the area, I was hard-pressed to find, or even to describe to those who’d never seen them.

Going to school in Washington D.C., then settling down finally here in Philadelphia, there were always certain items I craved and sought out. One of them was the elusive rainbow cookie, a three-layer sponge cake enrobed in chocolate and sliced into small squares. Another was the black-and-white iced deli cookie, eventually made infamous on Seinfeld.

But one of my favorites was always hamantaschen, the Jewish dessert delicacy shaped in a heavenly triangular dough. As a child, when my grandparents would bring me the delicious pastries from a Queens New York bakery, it was probably around this time of year. Each year, February or March typically marks the celebration of Purim, the Jewish holiday recounted in the Book of Esther celebrating the period in the fifth century B.C. when the Jewish people were saved from the Persians.

While Passover is known for its brisket and Hannukah for its latkes, Purim, which lasts two days from Feb. 25 to 26 this year, is known for two triangular foods, kreplach, a pasta filled with beef or chicken, and hamantaschen, filled with poppy seeds or dates, for dessert. Both foods reflect the middle Eastern flavors found in Ashkenazi Jewish cuisine, and it is believed they are triangular to represent the Persian leader Haman’s triangular hat.

Amy Edelman, the owner of Night Kitchen Bakery, is crafting her hamantaschen right now, placing it in her bakery case this week. The cookie will make a limited-time appearance for the holiday in three flavors: poppy seed, prune and cherry-filled, for local Jews who look for them each year. She began them mid-month and will continue to make them throughout the month. She says customers know to come looking for them when Purim arrives.

“They are richer than shortbread,” Edelman said. “And the dough is softer. It is really good. Once we make them, we keep making them throughout the month.”

The difference between the hamantaschen dough and a regular cookie dough-like shortbread lies in two main ingredients: egg yolks and baking powder. The yolks add a richness while the baking powder allows the triangular treats to rise. Edelman rolls the dough out to an eighth of an inch thick, cuts out large three-inch circles, then places the filling in the center of each. She brushes the outside with egg yolk, then pinches the corners of the dough to make a triangular hat shape.

“Our trick to keep them from losing their shape in the oven is to freeze them for about an hour before baking and pop them in the oven frozen,” said Edelman. “Otherwise they won’t hold their shape.”

Try out your own hamantaschen at home this week with one of my favorite recipes from the City Tavern Baking and Dessert Cookbook. While we sadly mourned the permanent shuttering of the historic City Tavern in Old City this year during the pandemic, this traditional recipe, which uses a plum and prune filling, was popular in the 18th century among Philadelphia Jews, and my husband used it many a day when he was pastry chef there.

For the plum prune filling:

To make the dough: In the bowl of a mixer with a paddle attachment on medium speed, mix together flour, sugar, butter, cream cheese until smooth. Add the eggs and vanilla extract and mix until combined. Chill in the refrigerator for two hours.

Prepare the plum pudding: In a medium-size saucepan, melt the butter over medium heat. With a wooden spoon, stir in the prunes and plums. Add the brown sugar and lemon juice. Cook the mixture until the sugar dissolves, the mixture thickens, and the fruits begin to break down.

Stir in the orange marmalade and raisins. Cook the mixture until it boils then remove from the heat, and allow the mixture to cool to room temperature.

To shape the hamantaschen, roll the dough to a ¼-inch thickness. Using a 5-inch fluted biscuit cutter, cut 12 rounds from the dough. Brush the dough rounds with the egg wash.

Place two tablespoons of the filling in the center of each round. Fold the dough in thirds over the filling, leaving the center uncovered and forming a triangle-shaped pastry. Brush the folded edges with the egg wash. Transfer the hamantaschen to a cookie sheet. Chill in the refrigerator for one hour.

Preheat oven to 375 degrees. Bake the hamantaschen for 15 minutes, or until golden. Cool completely on the cookie sheets on wire racks.