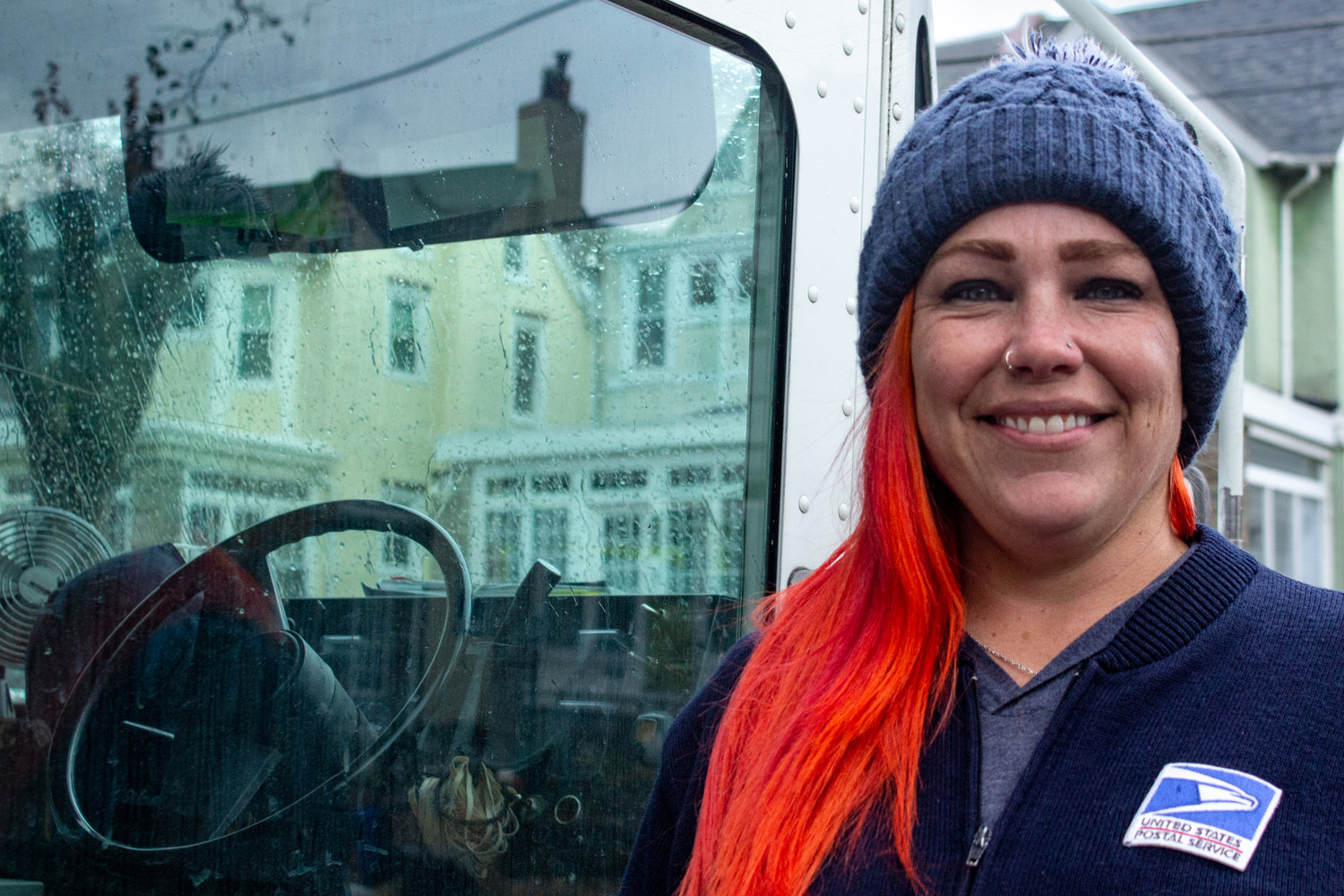 Jen Hasson, a mail carrier since 2004 whose route has been a part of Chestnut Hill for the past 14 years.

Tom and Jen Hasson do not mind a little occasional monkey business. They fell in love with this little guy when recently visiting a horse ranch in Tennessee with their sons. “It was hard to pull ourselves away from him,” said Jen.
Previous Next
Posted Thursday, November 18, 2021 6:00 am
by Len Lear

In the era of Covid, the word “carrier” tends to take on a negative connotation, but when it comes to the term “mail carriers,” Tom and Jen Hasson, with her bright hair colors and tattoos, are just what the doctor ordered for mail customers on their respective routes in Mt. Airy and Chestnut Hill. And anyone on their routes can rest assured they’re doing their best to get their holiday mail delivered.

For example, on the Chestnut Hill West Nextdoor website, local resident Louise Pongracz recently wrote, “Shout out for Jen. We have all been troubled by the decreasing quality of U.S. Mail service. However, many of us at the Top of the Hill are fortunate to have Jen as our regular mail carrier … She takes real pride in her work, and we are the lucky beneficiaries. Thanks, Jen.”

In the era of Covid, the word “carrier” tends to take on a negative connotation

Jen, a mail carrier since 2004 whose route has been a part of Chestnut Hill for the past 14 years, said such notes are rewarding. “Someone took the time to be appreciative of what we do,” she said. “Because of the understaffing at the Post Office, we are pushed to the limit. I work six days a week, 12 hours a day, because I want to make sure that every customer on my route gets their mail, so it is great when someone recognizes what we do.

“Sometimes a customer won't get their mail until 6 p.m., and maybe they think it's because we are in a bar drinking, like the character Norm in 'Cheers',” she continued. “But the real reason is that after I finish my own route, I may have to deliver someone else's route because of understaffing or because someone called in sick. We really do care about every customer and take great pride in our work. It is not for everyone. With all the walking we do and climbing steps, you really have to be in shape.”

“Things have changed so much over the years,” added Tom, 51, who has been a mail carrier for 28 years, the last 14 in Mt. Airy. “I applied for the job and took the test in 1989, and I did not get a call telling me I had the job until more than four years later. Now, though, so many people have quit. Today, if you can stand up on two feet, you've got the job. And if you can't stand up on two feet, maybe they'll make you a supervisor. I even suggested that postal representatives should go to the airport with a brass band when the Afghan refugees arrive and offer them jobs!”

Despite the understaffing and the fact that there were a myriad of complaints about late-arriving packages during last year's Christmas gift-giving season, both Hassons expressed confidence that the postal service has put procedures in place that will make package deliveries much more timely during the upcoming holiday season than they were last year when Covid was raging

Jen grew up in Olney and attended Mercy Vocational High School in North Philly, where she insists she studied business and not letter carrying. “There was a Tastykake factory down the street, and the smell was wonderful every day.”

Tom grew up in South Philly near the stadium complex and attended Bishop Neumann High School. After graduation, he worked at the Corned Beef Academy in center city for five years making sandwiches until the restaurant closed. “I used to carve 18 20-pound turkeys every morning, and we would sell out every day.”

Both mail carriers, who identify as “people persons,” say the best thing about their job is the interaction with customers. For example, they love it when customers wave at them through their windows. Jen has been known to drop her bag and throw a football around with a neighborhood kid for a few minutes, and Tom, a Dallas Cowboys fan (Boo!), has been known to stop and shoot up “hoops” with neighborhood youth. They even carry a book of stamps and put their own stamps on envelopes the customers forgot to put stamps on.

What about the alleged nemeses of mail carriers — dogs? Tom and Jen have each been bitten only once by a dog, not serious in either case, and they insist they love their “furry friends.” The self-professed animal lovers make a fuss over dogs and cats on their routes. In fact, six years ago one very friendly stray cat on the 8200 block of Fayette Street would follow Tom and Jen's every step as they walked in the neighborhood, so they adopted her, and now Olive “runs our house.” And Jen added, “Please mention my three favorite dogs on my route — Oscar, Lucy and Emmy. They will be so excited to see their names in the paper, and they all get the Local.”

Tom and Jen were both working out of the Market Square Post Office in Chestnut Hill when they met in 2013 and married in 2017. “One day we were parked on opposite sides of the street at Mt. Pleasant and Williams Avenue,” said Tom. “We started throwing snowballs at each other, but she still married me after that.” The pair purposely married on a Sunday so that co-workers could attend. About 110 guests attended the wedding in Bensalem, half of them postal workers.

What about excessive heat, cold, rain, and snow? (Their mail trucks are not air-conditioned.) “There are usually about 10 really bad weather days a year,” said Tom, although Jen insists there are “much more than that.”

“I love everything about Chestnut Hill,” said Jen. And according to Tom, “It is 10 degrees cooler in Chestnut Hill in the summertime than in Mt. Airy because of all the trees. Any mail carrier will tell you  that.”

The mail carrying duo have lived in Willow Grove for six years (in Glenside before that) with their sons — Shawn, 20; Jacob, 14, and Jordan, 9 — and their dog, cat and 75-gallon fish tank.

You can reach Len Lear at lenlear@