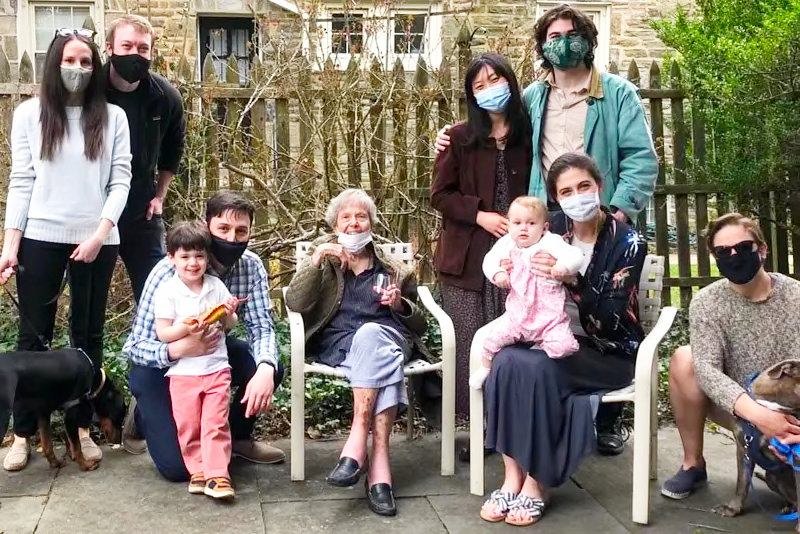 This photo of Miriam was taken in March 2021, in her backyard, with some of her grandchildren and great-grandchildren. It was the family's second Covid Passover and the celebration was small. 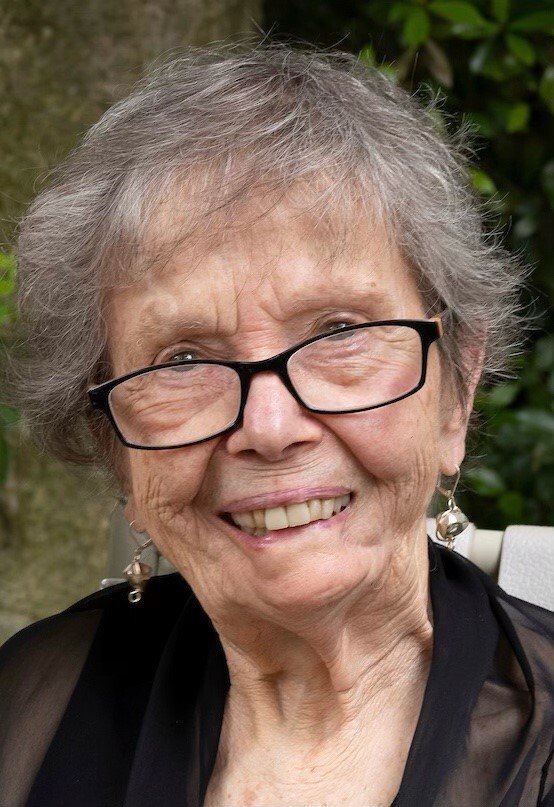 Miriam Lippman Finkel worked on behalf of many social justice issues for all 60 years that she lived in East Mt. Airy and for years before that. 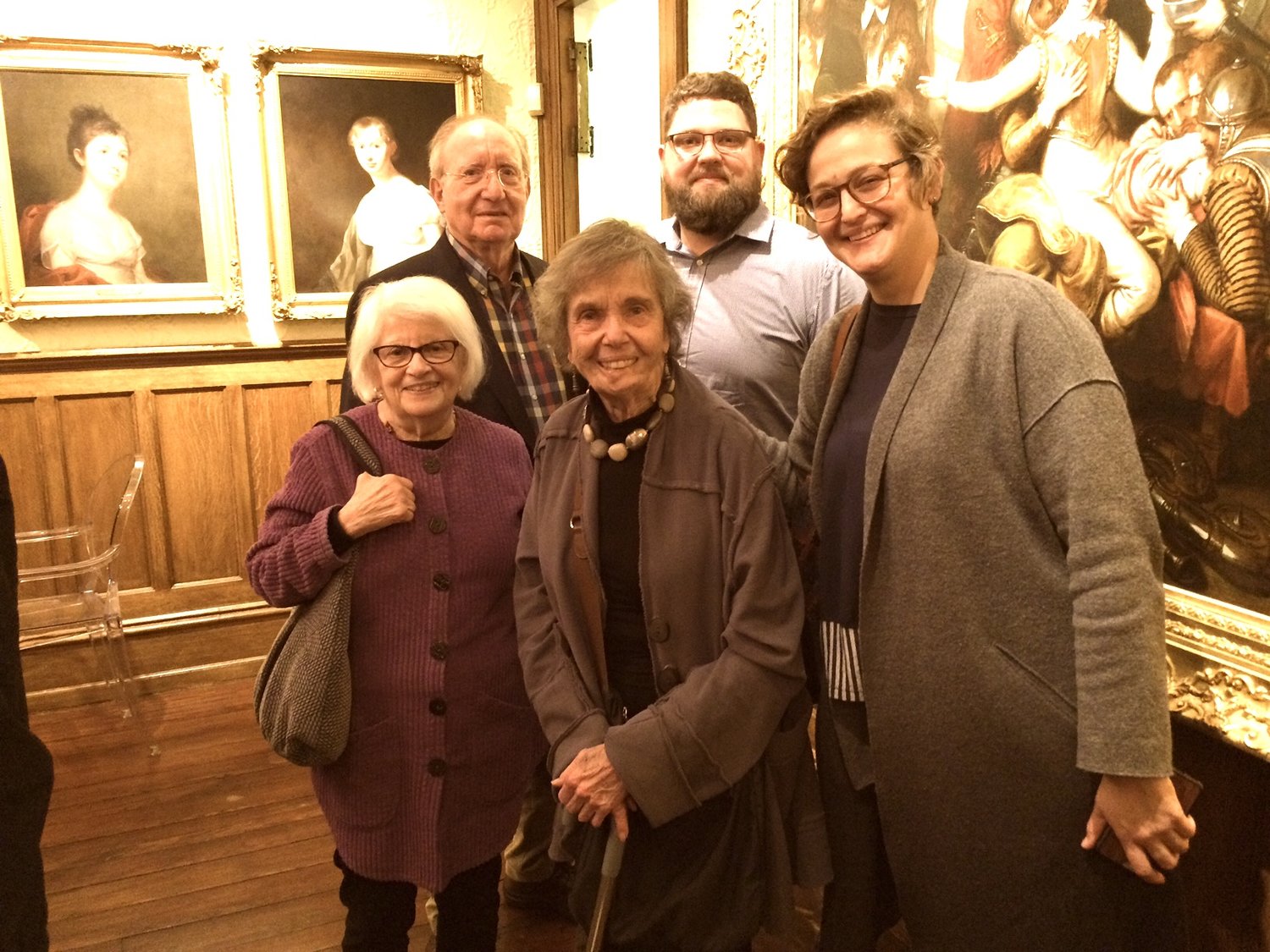 Miriam Lippman Finkel, who devoted her life to family and social justice issues, died after a long illness on Wednesday, Oct. 27 in the East Mt. Airy home where she had lived for 60 years. She was 94 years old.

Finkel and her late husband Morris, a well-known Philadelphia antiques dealer, raised three children in that home. Their oldest son Ken, a professor at Temple University, moved back to the area as an adult, raised his three children in East Mt. Airy and still lives with his wife two blocks from the house where he grew up.

The second female president in the history of Reform Congregation Keneseth Israel, Miriam Finkel was a staunch advocate of outreach to immigrants, the homeless and anyone who was marginalized, abused or hungry. “Our love for justice,” she once said, “teaches us the right thing to do, and how I respond to poverty and homelessness is how my children and grandchildren will learn to respond.”

Miriam was the daughter of Samuel and Nettie (Abramowitz) Lippman, born and raised in Atlantic City, NJ. She and her identical twin sister, Hannah, were often photographed on the boardwalk there. Her father, a captain in the Atlantic City police department, died when the twins were only 6, and according to family members, Miriam struggled throughout her life to recall memories of him. She adored both brothers and adopted her oldest brother, Nathan “Buddy” Lippman, as a father figure.

After graduating from Atlantic City High School in 1945, Miriam and Hannah attended the University of Pennsylvania, rooming together at Sergeant Hall, the university’s first women’s dormitory. According to Margaret O. Kirk, Miriam's daughter-in-law (Ken's wife), Miriam was “known for her mischievous 'twin' pranks and her love of campus activities.”

Miriam was a serious student of psychology, and the move from Atlantic City to Philadelphia in the mid-'40s triggered Miriam’s future work in social justice. “As a college student,” said Kirk, “she first recognized Philadelphia’s deep pockets of poverty and came to terms with her own lack of understanding and awareness of racial discrimination. She would later remember, with deep regret, her unquestioned acceptance of the fact that she and her sister attended one elementary school for White children while their playmate and the son of their Black housekeeper, living at the same address, attended a separate school.”

The family recalled that Miriam said, shaking her head with sadness, “Every morning, we walked in one direction, and Jimmy walked in the other direction. We just took it for granted.”

While pursuing her degree, Miriam met Morris, a 1943 Penn graduate, on a blind date in Atlantic City, and they were married there in the Strand Hotel just weeks after her 1949 graduation. Miriam then started her career as a social worker, specializing in children.

While Morris developed his antiques business on Pine Street in Center City, Miriam paused her social work career to raise their three children. The family moved to East Mt. Airy in 1961 and over six decades their home became a much-visited destination for family, friends and fellow activists. Their choice to live in an integrated part of the city during a time of “blockbusting” and “white flight” was deliberate,

Miriam’s social activism grew in many directions over the decades. She developed deep ties to the Association for Jewish Children (now known as JFCS, the Jewish Family and Children’s Service). For years, she maintained relationships and hosted family dinners for “our girls in the residence who cannot live at home and need our guidance, supervision and affection.” Returning to her alma mater, she volunteered at the University Museum, helping launch a program to bring archeology into public schools, particularly those in underserved communities.

By the early 1970s, Miriam was active in the aid of Russian Jews, helping “refuseniks” to resist oppression and find their way to freedom. In 1974 she became embroiled in the plight of Vladimir Oliker, a 32-year-old mathematician who was harassed and beaten while attempting to convey the names of jailed refuseniks during a phone call to a post office in Leningrad.

As reported by The Philadelphia Inquirer’s Larry Eichel, during Miriam’s call with Oliker the Russian “voices got louder, rising as if in anger” before Oliker cried out “secret agents…” and was interrupted mid-sentence. Oliker was eventually ejected from the Soviet Union. The Finkel family agreed to sponsor Oliker and shared their home with him for many months before the Soviets finally released his wife and child.

With coordinated help orchestrated by Miriam and other members of her temple, Oliker settled in an apartment in West Mt. Airy and became an associate professor at Temple University. Now an Emory University mathematics professor in Atlanta, Georgia, Oliker called the Finkel family immediately upon hearing of her death. “She was a light at the end of our very dark tunnel,” he said.

Through her synagogue,  Miriam supported countless efforts for decades to foster change, coordinating Shabbat dinners for a Black/Jewish Dialogue Group, heading up the annual ethnic food festival, chairing the Antique Show, coordinating the synagogue’s Mitzvah Day to support Habitat for Humanity, spearheading bus trips to protests in Washington, D.C., and coordinating relief for victims of Hurricane Katrina. According to family members, she said in a speech in 1989, “We are free only when we have an errand on earth.”

Miriam is survived by two children: Kenneth (Margaret O. Kirk) and Amy (Richard J. Braemer). Her youngest child, Ned (Tawnya E. Finkel), predeceased her, as did her siblings, Nathan Lippman, Richard Lippman and Hannah Diamond Pickett. She is also survived by seven grandchildren and three great-grandchildren. The family is grateful to the staff of Friends Life Care who were devoted to Miriam for many years, especially Vergina Flowers.

Contributions in Miriam Finkel’s memory may be made to the Keneseth Israel-General Fund, 8339 Old York Rd. Elkins Park, PA 19027. Graveside service was private. A memorial service will be announced at a later date.

GFS grad and researcher the 'Jane Goodall of Mt. Airy'

Microscope inspiration for art based on life