The two AACA squads were arrayed against one another a third time in the first round of the PIAA District 1 Class 5A tournament last Friday. 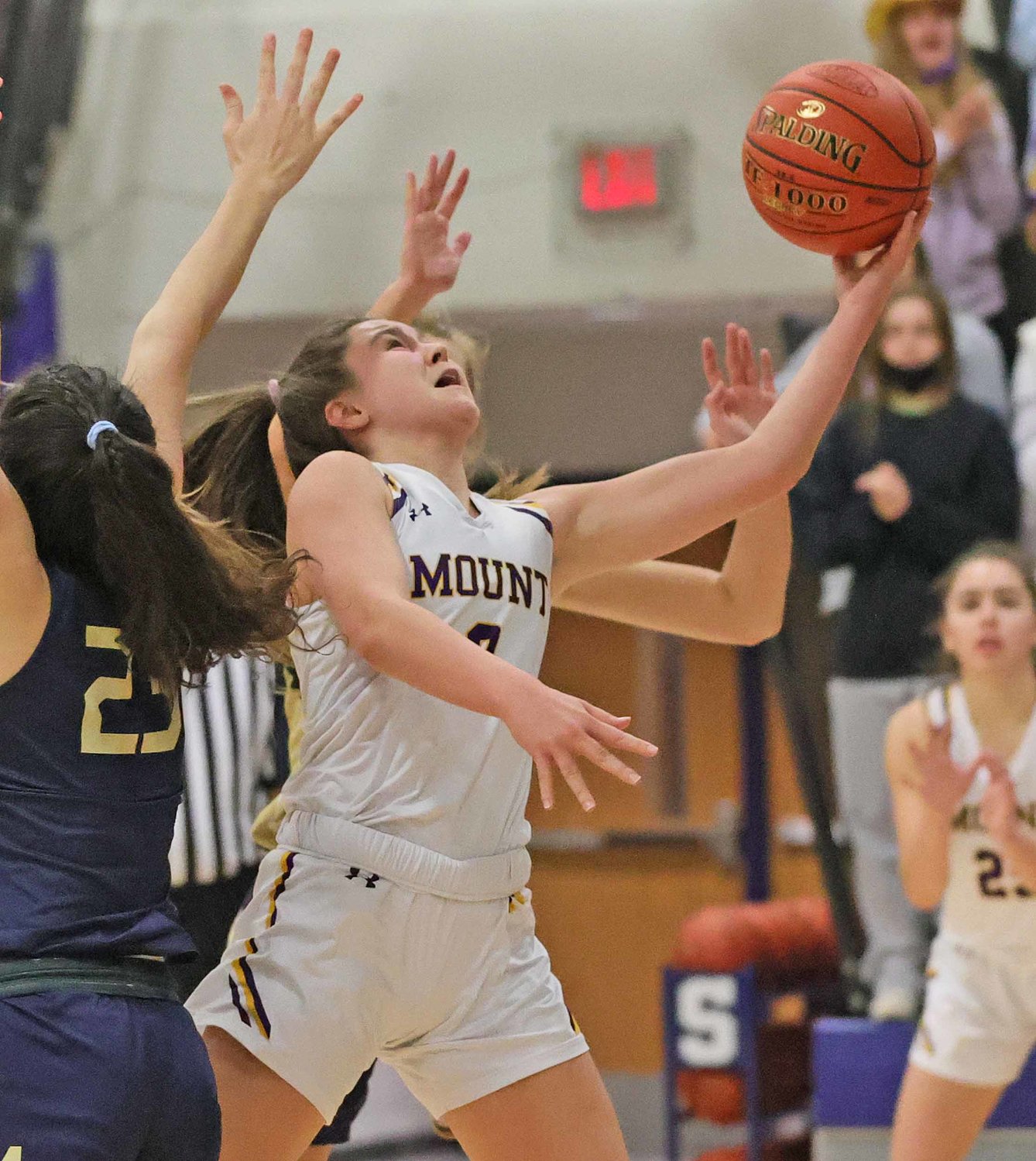 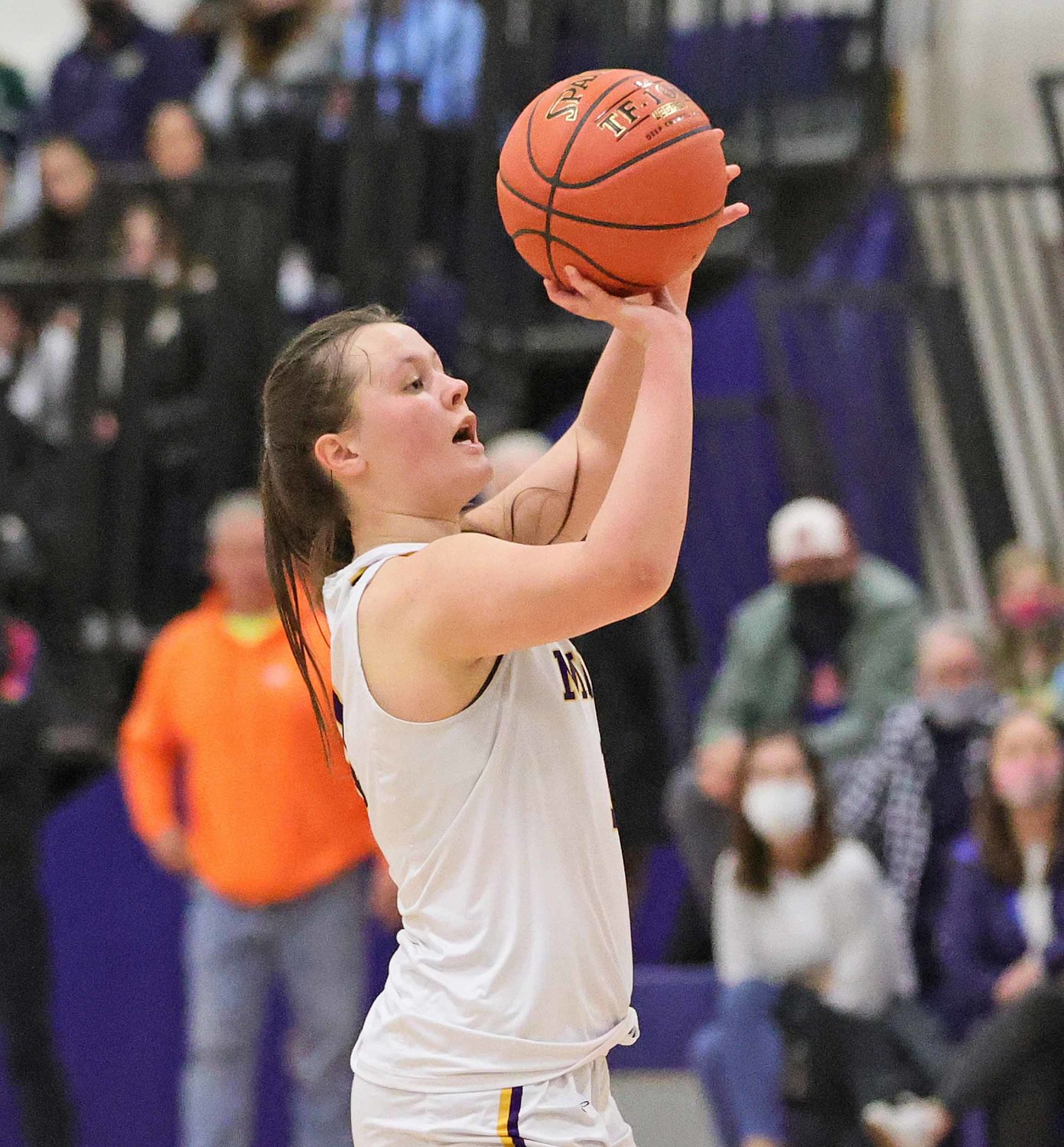 The third time was not a charm as the Mount St. Joseph Magic ended their basketball season last Friday night with a loss to familiar Catholic Academies rival Merion Mercy Academy. The Mount had won both of its regular-season league games against Merion, prevailing by 10 points the first time but only by two in the second meeting.

The two AACA squads were arrayed against one another a third time in the first round of the PIAA District 1 Class 5A tournament last Friday. The Mount was seeded eighth for the tourney and Merion was ninth, and the Mount hosted the contest in the larger gym at Springfield Township High School.

Merion led the game from the outset until late in the third quarter, when the Mount held a one-point lead two times. By the end of the period, the Golden Bears were back up 27-24, and they managed to hold off the Mounties in the final frame to win 32-31.

The 5A tournament was made up of 12 teams, with the top four receiving first-round byes. Those four would begin play in the quarterfinals against the four winners of the first-round games involving seeds five through 12.

Five teams would eventually go on to the state tournament, the four semifinalists and the winner of a play-in bracket including the four quarterfinal losers. The meant that a team playing in the first round needed to win in order to have any chance of making States, so the Mount's loss on Friday left the Magic with nowhere to go.

Two baskets from the paint and a three-pointer got Merion out to a 7-0 lead, but Hoffman banked in a "three" from the top of the key and then hit another one from a few steps outside the line on the right wing. A little later the Magic pulled even at 10-10, but the Golden Bears led 12-10 at the quarter thanks to two free throws by Elle Kilgannon.

The score slowly seesawed to 16-14 in the second quarter, as Hoffman and junior Julia Donahue netted field goals for the Magic. Merion's Francesca Scarpone drove the lane to score for Merion early in the final minute, and after two Mount misses at the other end the half ended with the Main Line squad up 18-14.

In the early going in the third round, both MSJ's McGrorty and Merion's Julia Richardson deposited one field goal and one free throw. Hoffman got the Magic within two with a driving lay-up, then McGrorty stuck a three-pointer from the left side. The Mount had its first lead of the evening (22-21), and when a Merion basket was answered by Hoffman, the Magic were up 24-23 heading into the final minute of the third frame.

The Golden Bears scored their next time down the floor, then they had Scarpone add a transition lay-up to enter the fourth quarter with a 27-24 edge.

During the first four minutes of the period, a put-back by Lucy Curry of Merion was followed by a free throw by Mount freshman Addy Smith and then a transition lay-up by Hoffman off of a steal by McGrorty. The tally was now 29-27.

As the Mount applied a press, McGrorty was whistled for her fourth personal foul, which was the Magic's fourth team foul of the half. When Smith hit a jumper from the right side in response to a lay-up by Merion's Curry, it was still a two-point affair.

Merion turned the ball over with a walk, but the Magic missed a shot at the other end. With 1:24 on the clock, Curry made the first of two free throws. Hoffman was fouled with 1:11 remaining, making both shots from the stripe to tighten the score to 32-31.

McGrorty chased down a potential fast break by Merion and forced the Bears to turn the ball over. After a missed Mount shot, the rebound was tied up and possession went to the Magic. Merion stole the ball back and McGrorty committed her fifth foul (the team's sixth), leaving the game with 7.4 seconds to go.

Merion inbounded the ball to Annie Conway, who was fouled but missed the first shot of a one-and-one with 5.9 on the clock. Following a time-out, the Mount missed another shot and the rebound dropped down to the left of the basket.

After a scramble, there was another tie-up; the arrow pointed to Merion but it was a moot point as there was only one-tenth of a second remaining. Merion prevailed by a point and the Mount's season was over.

The Magic finished with an overall record of 10-14.

In addition to the output of Hoffman and McGrorty, the Magic received three points from Smith and two from Donahue. Seven different players scored for Merion, which was led by Richardson, with nine points, and Scarpone, with seven.