What began as a cold, wet morning last Tuesday turned into a brilliant fall afternoon. However, when the sun set, it also set on Mount St. Joseph Academy's field hockey season. 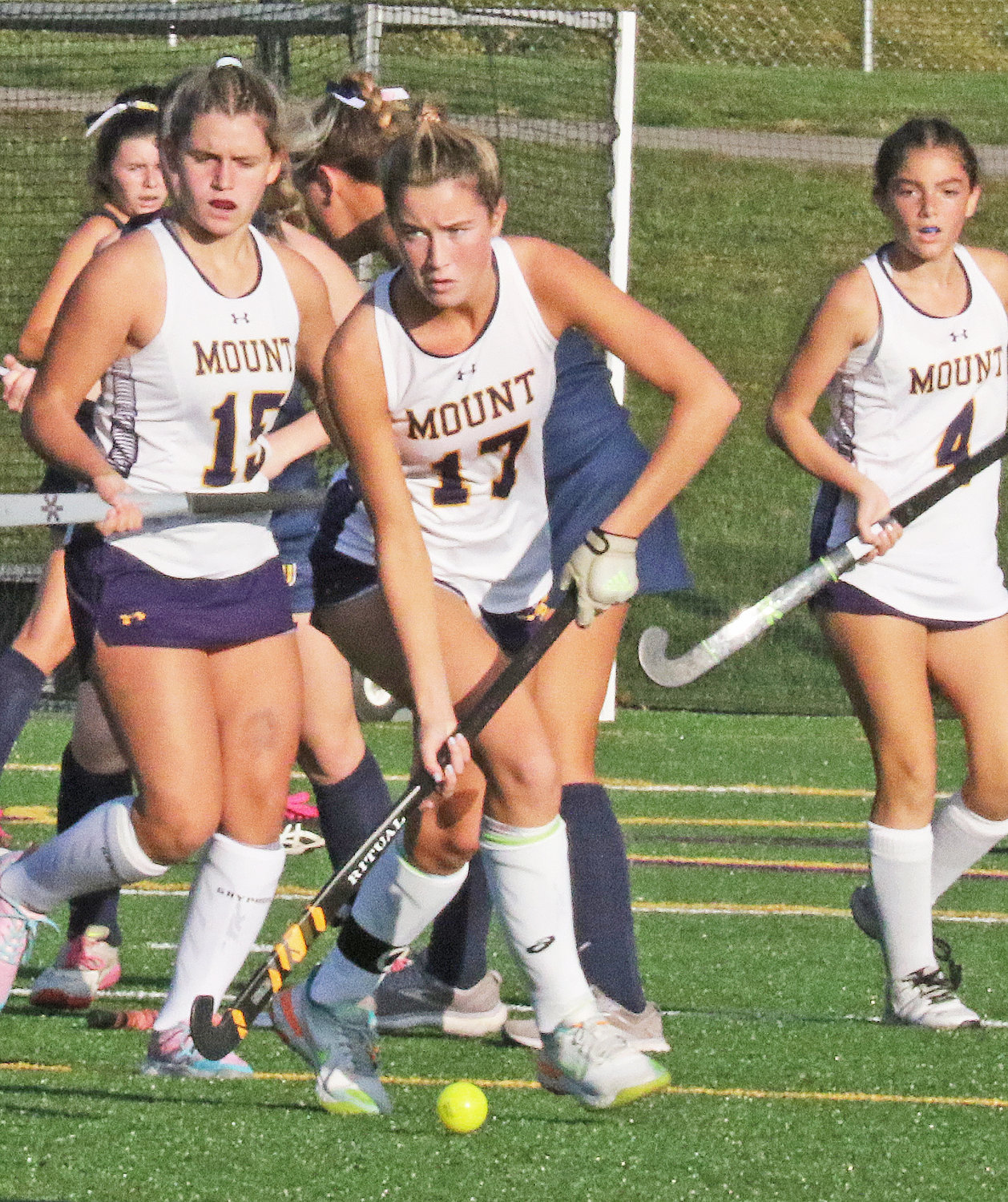 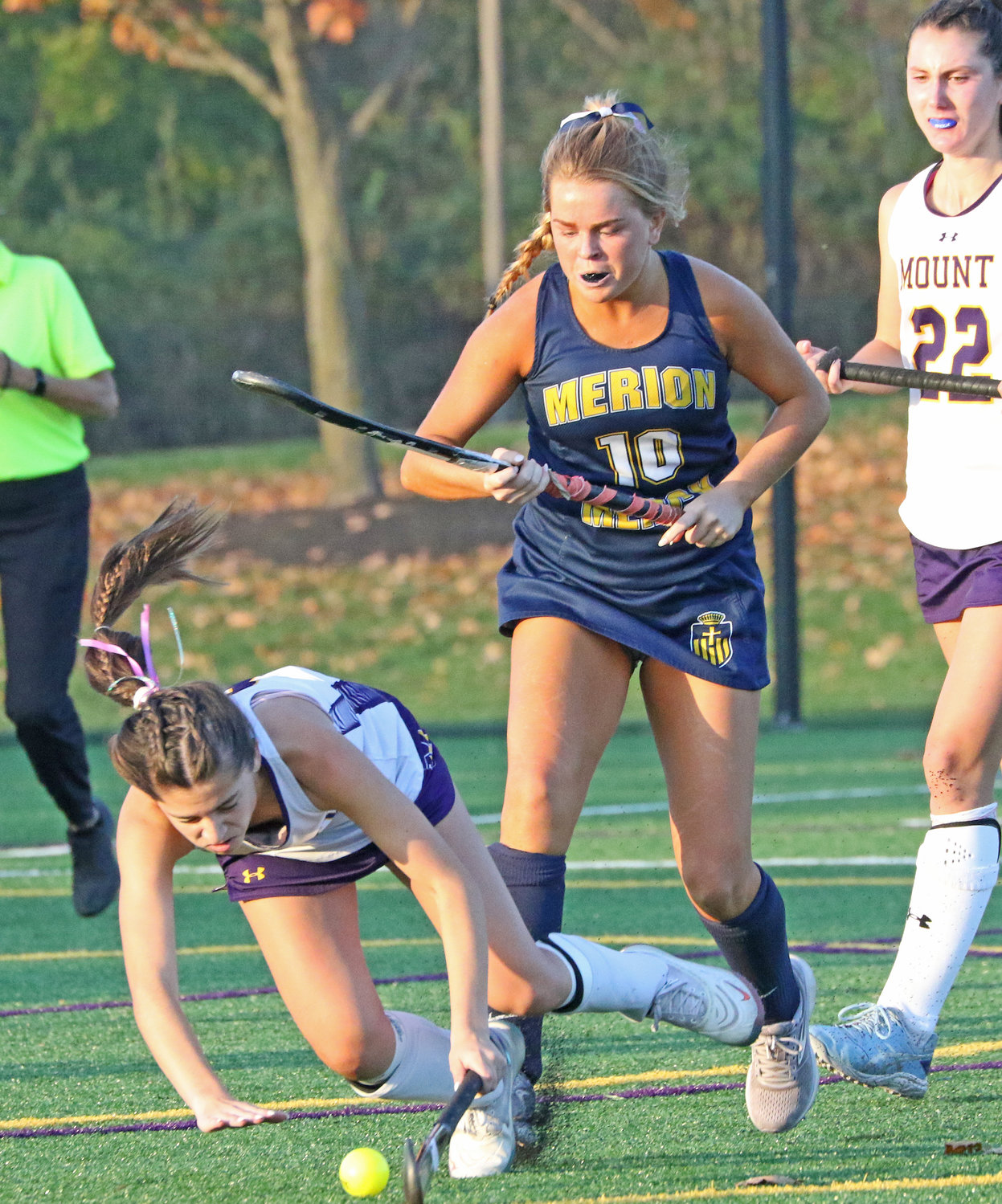 Mount freshman Katie Tropiano falls to the turf in a sequence that netted Merion Mercy a yellow card.
Photo by Tom Utescher
Previous Next
Posted Wednesday, November 9, 2022 12:00 am
by Tom Utescher

What began as a cold, wet morning last Tuesday turned into a brilliant fall afternoon. However, when the sun set, it also set on Mount St. Joseph Academy's field hockey season.

The Magic were playing a play-in semifinal game in the District 1 Class AA tournament, in which the four teams that lost in the main-draw quarterfinals were playing for the district's one remaining spot in the PIAA state tournament.

It was now a single-elimination affair, and the Mounties saw their season end with a 4-0 loss to a familiar rival, fellow Athletic Association of Catholic Academies member Merion Mercy. Seeded sixth at the start of the district tournament, Mount St. Joe hosted the game, while 10th-seeded Merion was the visitor.

The Merion Golden Bears scored a goal in the second quarter, then really took control in the third period, when they scored three times.

Mount St. Joe ended its season with an overall record of 11-10, while posting a 3-5 mark within the AACA.

During the regular season in the league, the Mount and Merion split a pair of 2-1 contests. In Districts, the Magic defeated Lower Morland and the lost to Radnor, and late in the Radnor game starting Mount goalie Nora Haney, a senior, suffered a concussion. Freshman keeper Lexi Kelly finished out that game, and played throughout the Merion game last Tuesday.

The visiting Golden Bears earned the first penalty corner of the match, which went by without a shot. The Magic generated some offense in the middle of the period, and had a corner on which the inserted ball was not stopped at the top of the circle.

Merion Mercy would enjoy a series of four penalty corners in the last two minutes of the opening frame. After two saves by MSJ's Kelly and a Merion shot blocked by Mount sophomore back Joie Katsock, it was still 0-0 at the end.

The visitors immediately rushed upfield and got a corner as the second quarter dawned, and two minutes in they were on the board. This came on another corner; there were two touches on the ball after the insertion and then a successful sweep shot from the left side by MMA senior Grace Flood, who will go on to play at the University of Vermont.

After this, corners for both teams did not alter the score, which stood at 1-0 for halftime. Merion appeared intent on increasing its lead as the second half got underway, playing with aggressive energy. The board didn't budge as MSJ's Kelly made a kick save on one shot and watched another track wide to the left.

The Bears' insurance goal came off a long shot by senior Kasey Knapp less than four minutes into the half. The Mounties felt the shot was actually taken just outside the circle, but the officials didn't agree. Although the Magic went up on attack and enjoyed corners with 10 minutes, eight minutes, and six minutes left in the third quarter, the hosts still could not get on the scoreboard. The Merion keeper made several saves, and their flyer broke up the third corner play.

With five minutes to go, Merion came up the pitch on the left and centered the ball. In a mob scene near the right post the Mount's Kelly slipped down, and MMA junior Reagan Luczak poked the ball in for a 3-0 lead.

With 2:14 left in the third quarter the 4-0 final went up on the board; Knapp scored her second goal of the day with a reversed stick.

In round four the Magic had three corners in the first five minutes and had a shot from scrimmage hit the right post, but they couldn't find the backboard. That's how it would remain for the last 10 minutes, as the Golden Bears kept their state tournament hopes alive and the Magic packed up their sticks and shin guards.

The Mount was a relatively young team this year, having graduated 11 seniors from 2021. They'll return a more seasoned squad next fall.