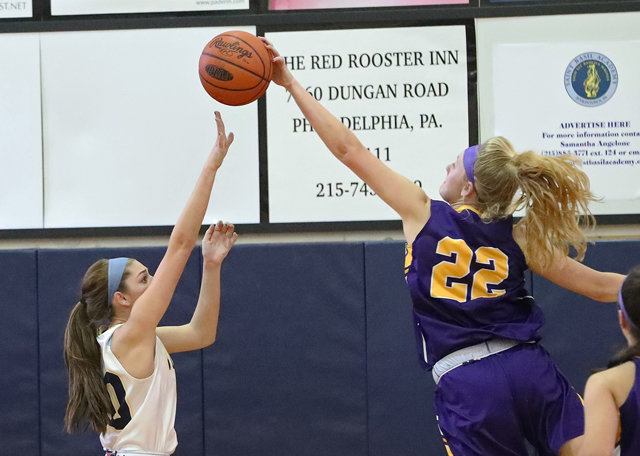 "Nowhere to run to, baby, nowhere to hide!" - Martha and The Vandellas

The basketball court at St. Basil Academy is notoriously tiny. When players on the team benches stretch their legs, their feet are on the court, and in the corners the gap between the three-point loop and the sideline is so small that you need to be a prima ballerina to tiptoe in and get off a trey.

These weren't the only difficulties that confronted visiting Mount St. Joseph Academy last Saturday afternoon. Although St. Basil has graduated 6'3" post player Natalie Kucowski (now at Lafayette), this year's team includes a number of players at or just under six feet tall who are athletic and have long arms. The Panthers' press is something to be concerned about, particularly when they're on their home court.

Still, the Magic were only down one point early in the fourth quarter. After that, they were outscored by their hosts, 18-8, and SBA came away with a 43-32 victory that raised its record to 9-2 within the Athletic Association of Catholic Academies and 13-5 overall.

Mount St. Joseph, led by 10 points from sophomore Lauren Vesey, nine from senior Deirdre Regan and seven from junior Lauren Cunningham, slipped a notch to 7-3 in the AACA. Three points apiece from sophomore Kelly Rothenberg and freshman Grace Niekelski completed the scoring for the Mounties, who left Jenkintown at 12-6 overall.

"We had to adjust to the small court, which was challenging," commented MSJ's Vesey. "We practiced against the press because we knew they would use it. We had some problems the first half, but we did better against it the second half. We also knew that rebounding would be a big thing, and it was. You have to give them credit; they got after every rebound."

Followers of Friends Schools League hoops may well recall that in the 2015-16 season Cheryl Remolde was a sophomore and sister Casey was a freshman on the team at Abington Friends. The next year the siblings migrated about a mile to St. Basil, where they've now been joined by their ninth-grade sister, Shannon.

A few days after Christmas, the Mount St. Joe Magic had been 7-1, and one of those W's was a 43-39 on their home floor over St. Basil. A number of things changed over the following six weeks.

MSJ senior Grace DiGiovanni, who had scored 11 points against the Panthers in December, suffered an ACL tear a few weeks later. St. Basil's Cheryl Remolde had been under the weather for the first encounter, but was in good health for the rematch. With last Saturday's outcome, SBA had avenged both of its early league losses to the Magic and to Villa Maria.

"We were a different team the first time we played them," remarked longtime St. Basil head coach Terry Mancini. "We had a group of girls on the team who had just made a long run in the soccer playoffs. Now, we're really starting to click and move in the right direction; we're in basketball shape and in a basketball mindset." 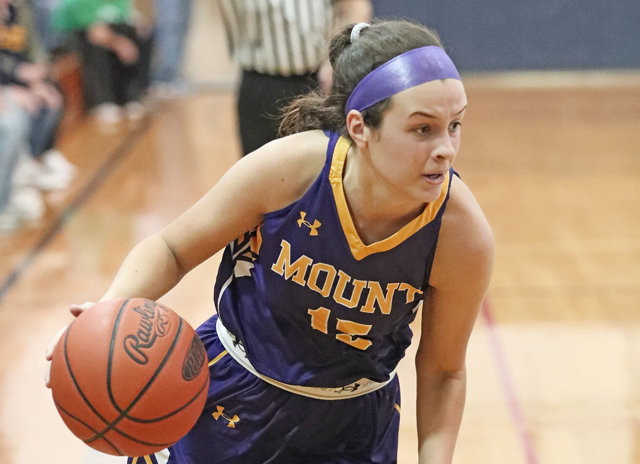 After the opening tip on Saturday, five minutes went by with the scoreboard still displaying a pair of zeroes. The Panthers forced turnovers out of the Mount, and their strong rebounding provided them with multiple shots on most possessions. The Magic played well on defense though, working past picks and screens and challenging the SBA shooters most of the time.

A lay-up by Regan and a free throw by Niekelski put the visitors up 3-0, and the quarter ended at 3-2 after Casey Remolde drained two foul shots for St. Basil.

The size of the court was also coming into play in terms of the number of fouls called. With the upgrade to a three-official system, the refs were able to spot every minute infraction in this small space. It almost made one wish that a two-person crew could be used in a gym of these dimensions. A total of 42 fouls called in the game caused the clock to move very slowly at times.

"We had an unlucky day with our foul shots," noted Vesey, whose team made six of 18 attempts.

In the second half, the Panthers did a better job of staying out of foul trouble, never putting the Mount on the line for a one-and-one while reaching the bonus themselves just a minute into the fourth quarter. Their accuracy from the stripe was another matter; five-for-12 during the fourth quarter and 13-for-27 overall.

St. Basil did a lot of damage from the floor in the second period, though, receiving field goals from five different players in a 17-8 quarter. At the beginning Gura, who has signed with Division II University of the Sciences, converted a rebound for the home team's first field goal of the game. More would follow shortly for the Panthers, while the Magic's lone basket from the floor was a trey fired by Vesey.

Going into the last two minutes of the half the visitors were five points back, 14-9, but then they dropped farther behind as Casey Remolde lobbed in a three from the left wing and then scored in transition off a pass from Carter.

Mount head coach Jim Roynan called time-out with eight seconds to go. This was followed by a trip to the foul line for Regan, who hit two free throws to set the score at 19-11 for the intermission.

A strong start after halftime helped the Mounties make up some ground in the third quarter. Vesey scored off a steal in the opening minute, then Rothenberg netted a 15-footer from the elbow. After Rothenberg was slapped with her fourth personal foul, Cunningham scored to bring the Magic back within two points of the leaders, 19-17.

The count seesawed to 23-21 as MSJ buckets by Niekelski and Regan balanced two free throws and a field goal by Gura for St. Basil. The last word belonged to the Panthers' Carter, who sent the hosts into the final round ahead 25-21.

Just 10 seconds into the fourth frame, it was a one-point game as Vesey canned a three-pointer off of an SBA turnover. Unfortunately for the Magic, they would not score again until Cunningham put in a transition lay-up with a little over three minutes left to play.

With a lay-up by Carter, a free throw by Gura and a trey by Casey Remolde, the Panthers pulled away. SBA's Deal netted a jumper to make it 33-24, so her team had a relatively comfortable lead when the tallest player on the court, the six-foot Carter, retired to the St. Basil bench with her fifth personal foul with 5:26 remaining.

Then, while the Panthers weren't able make any free throws on two consecutive trips to the charity stripe, they still derived some benefits. The second of these fouls was the fifth personal on the Mount's Niekelski, coming with 3:26 on the clock. In addition, on the last of St. Basil's errant free throws Gura got inside to score for the Panthers on a put-back, giving her squad a 10-point lead.

The aforementioned lay-up by Cunningham brought the gap back down to single digits (35-26), but despite two late three-point buckets by Cunningham and Regan the Magic never got closer than eight points in the closing minutes. The Mount lost starting senior forward Meg Dodaro to a fifth foul with a little under two minutes to go.

"I think in this last stretch of games - Villa, Nazareth, Mount - our defense has been outstanding," SBA's Mancini reflected. "Our schedule has helped us, because we've played some very good teams. We had three games at a tournament in Florida, and we've played tough teams around here like Souderton, Carroll and Central Bucks South."

In some ways, Mount St. Joseph is still figuring out how to cope with the loss of DiGiovanni.

"We've talked about everybody else needing to step up because she's been a key player for us," Vesey related. "It's kind of a mental thing, where everybody needs to trust in each other and really bring their game."