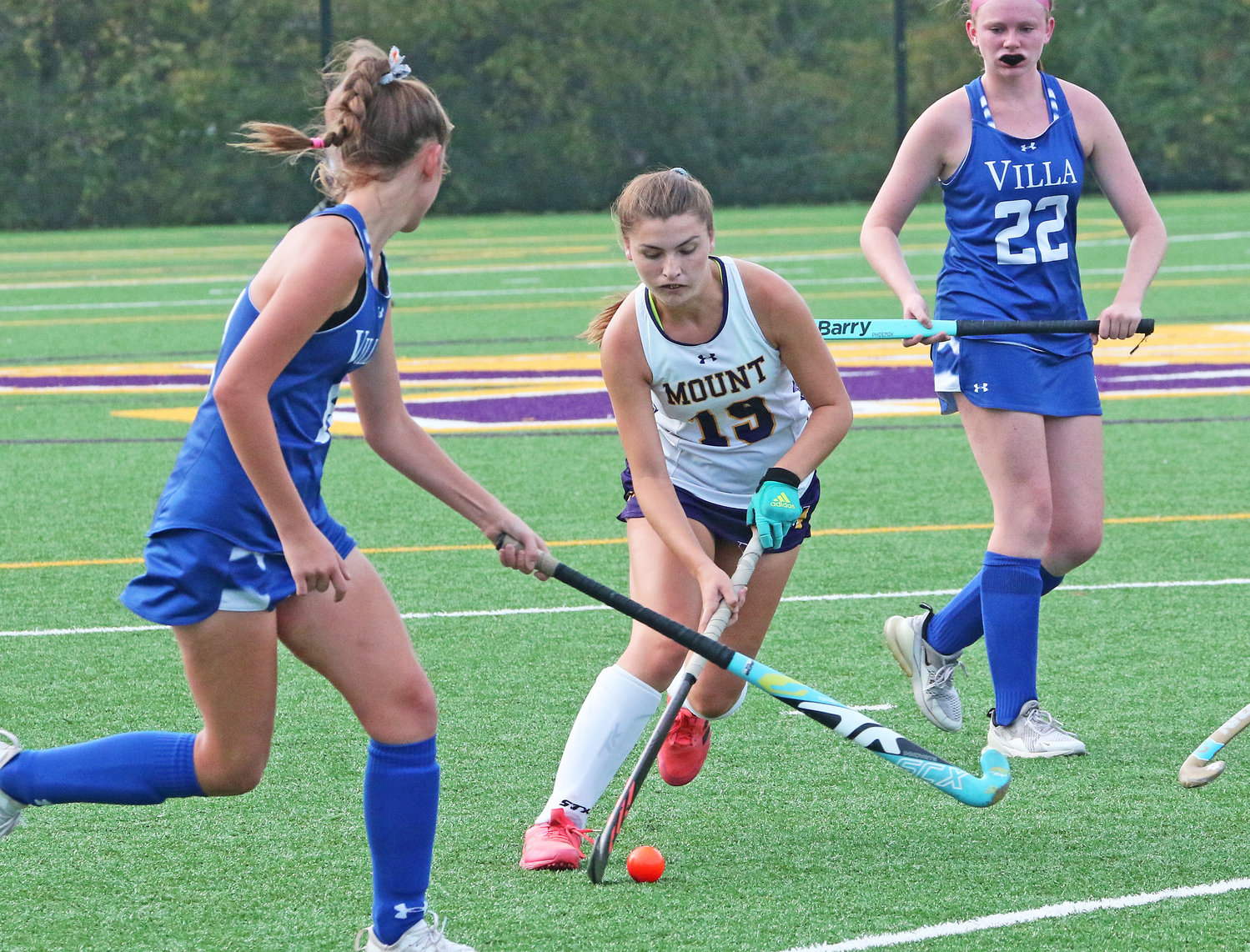 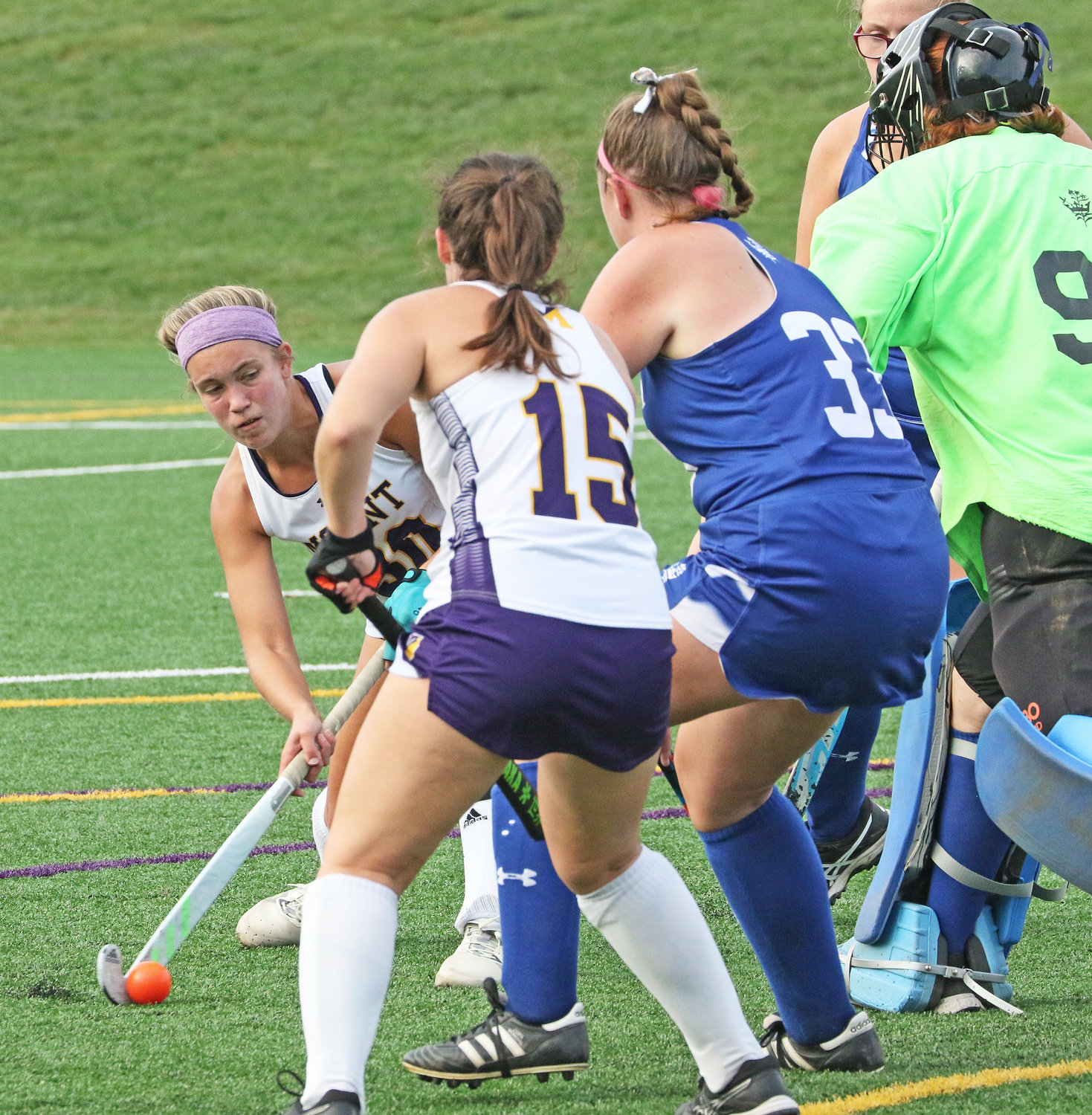 Katie Convey (left), a Mount St. Joe senior out of Norwood Fontbonne Academy, looks to thread the ball through a thicket of legs in front of the Villa Joe goal.
Tom Utescher
Previous Next
Posted Tuesday, October 19, 2021 8:00 am
by Tom Utescher

The outcome helped illustrate the wide disparity in the strength of the Catholic Academies hockey teams this fall. In addition to their recent 10-1 victory, the Magic have suffered a 10-1 loss at the hands of the other "Villa," traditional powerhouse Villa Maria Academy (Malvern, Pa.).

The Mount is sitting at the top of the lower half of the team standings. Villa, Merion Mercy, and Gwynedd Mercy all dealt with the Mount harshly in early encounters, but the Magic did better in rematches against Villa Maria and Merion.

The Mount's 3-10 overall record includes the recent Villa Joe win and one against Sacred Heart Academy, also a member of the AACA. St. Basil Academy, which historically had one of the weaker teams in the league, shut its doors for good last June, while another league member, Nazareth Academy, does not participate in field hockey in the AACA.

"The first couple of games we weren't really connecting," said first-year head coach Kyra Castano. "We struggled with creating offensive opportunities. We changed up our press a little bit and we're more organized. Now, it's nice to see the girls play off of each other because they know what's coming next."

The Magic took the play to the Jems last week as soon as the bout began, and off of a corner Timby had a shot saved by the Villa Joe keeper. With a little over six minutes elapsed junior Devin Loome (another Norwood grad) got off a hard shot from high in the circle and had the ball track a little wide to the left of the goal cage.

A minute after that the Magic found the visitors' backboard for the first time. The goal was scored by Mezzanotte, who recently decided that she will go on to play for Gettysburg College.

Timby made it 2-0 with 6:05 remaining in the first quarter, and with 2:12 left Convey got going, putting in the first of her four goals. As a junior, she had made a verbal commitment to Colgate University.

Her first goal against the Jems came off of a penalty corner, and as the Magic earned more corners, they switched between three different players to make the insertions; Scibelli and seniors Olivia Cook (also NFA) and Devon Lasky.

In the second quarter, Convey had a tip-in at the right post to make it a 4-0 game at the half. She and Donovan each scored in the middle of the third period to lift the Mount lead to 6-0.

Convey rounded out her four-goal day in the opening minute of the fourth quarter, and as the clock slipped below 12 minutes remaining Villa Joe broke up the Mount shutout, with Alex Cupper scoring for the Jems to make it 7-1.

The Mount was getting a lot of its younger girls into the game at this stage, players like talented freshmen Joie Katsock and Jill Marcolina. Not long after she got onto the field, Marcolina assisted on Donovan's second goal.

"We brought some of the JV into the mix today, and it was good to see them play," Castano said. "We also got to work on some different things on our corner opportunities that we couldn't have done in a really tight game. We also wanted to work on some little give-and-go's on the sidelines, which I think we executed pretty well in the fourth quarter."

Another reserve player for the Mount, sophomore Caroline Killian, deposited the Magic's ninth goal, and in the final 30 seconds Scibelli scored the final goal off of an assist from Marcolina.