The Avenues Café offers Lee Locklear a chance to blend his business acumen and cultural heritage. 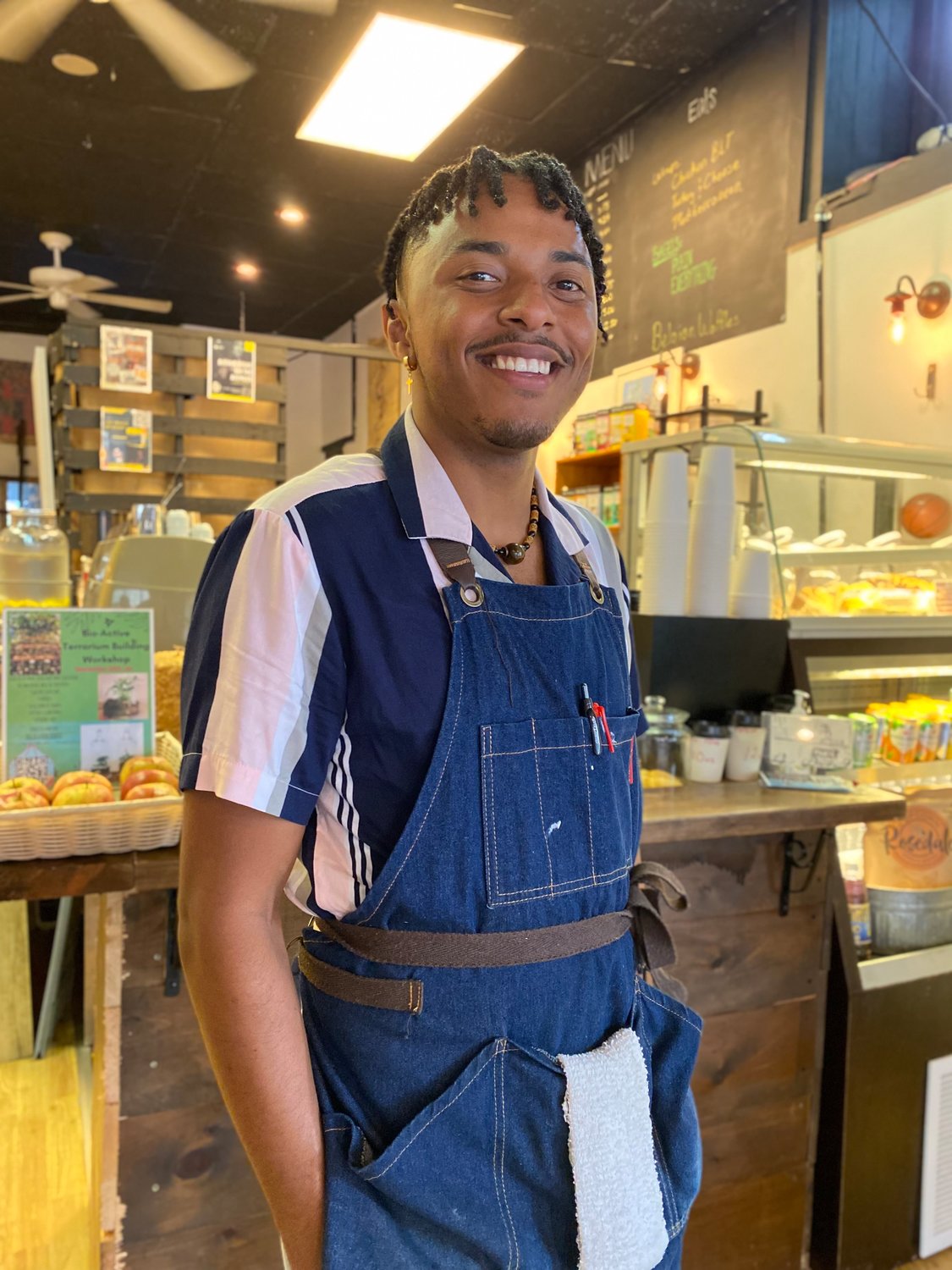 Lee Locklear opened the Avenues Café at the corner of Mt. Airy and Germantown in April of this year.
Septian Arnold 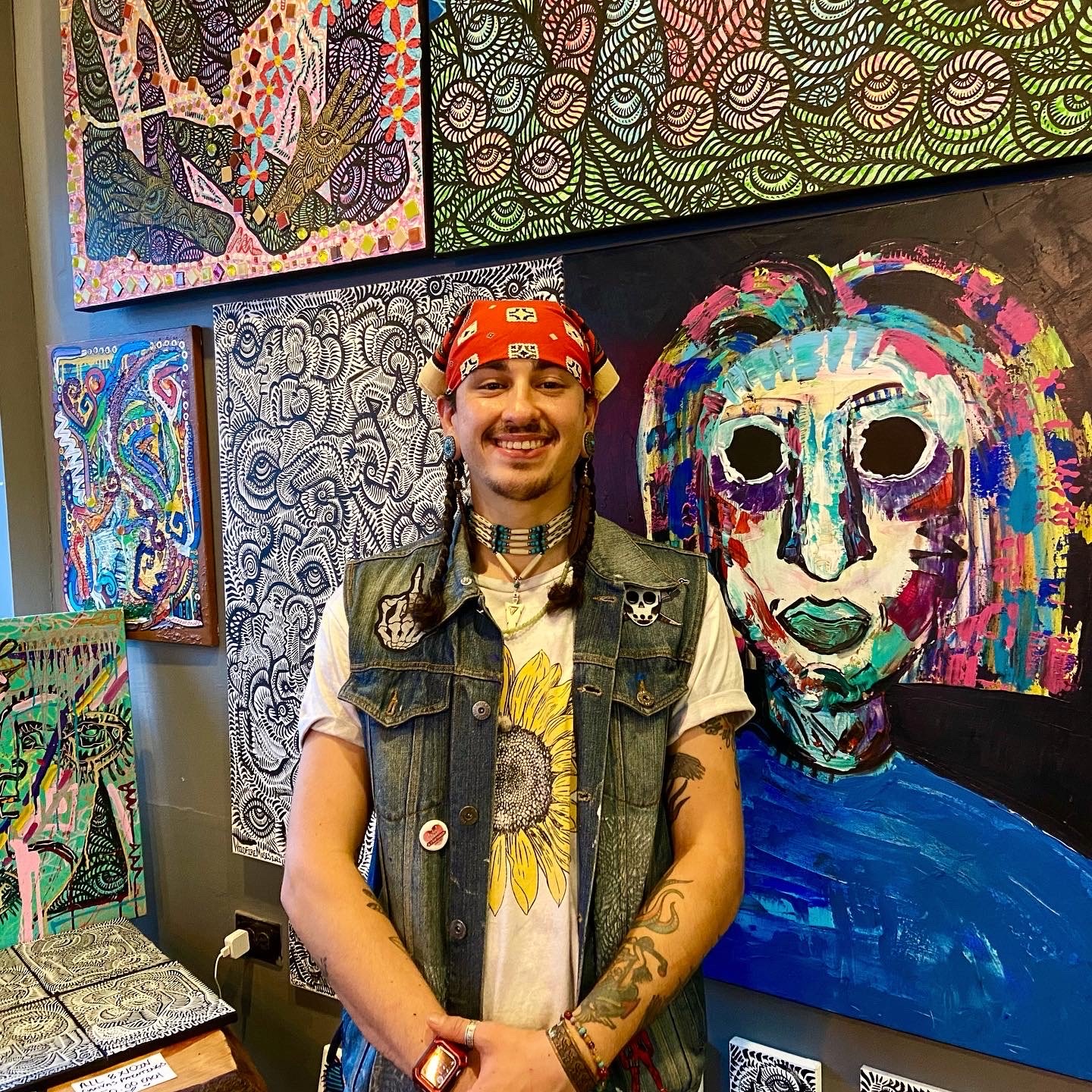 Mt. Airy resident Moses Jonah BuffaloBoy, a former manager of the Chestnut Hill Starbucks, is the Avenues Café barista. He says that growing up, he “took a lot of teasing from classmates about my name.”
Lee Locklear
Previous Next
Posted Wednesday, November 3, 2021 6:00 am
by Constance Garcia-Barrio

How fitting that Lee Locklear, whose heritage includes Indigenous roots, now owns the Avenues Café at the corner of Mt. Airy and Germantown Avenues. The latter thoroughfare was once a Lenni-Lenape Native American trail that ran from the Delaware River to the Perkiomen Creek, and Locklear brings an Indigenous ethic to the Avenues, which opened in April of this year.

Born and raised on a 150-acre family tobacco farm in Saint Pauls, North Carolina, Locklear, whose mother is a member of the Lumbee tribe and whose father is African American, grew up with organic practices. “We had cows, chickens, pigs and goats,” Locklear said last week. “I was in charge of making sure the animals got fed. The chickens, my biddies [baby chicks], were my special area of skill.”

For college, Locklear, who has two younger siblings, decided on a complete change of scenery. “It came down to two schools, one in New York [state] and one out west,” he said. Canisius College, a private Jesuit school in Buffalo, New York, offered Locklear “a generous aid package that recognized my unique background.”

Locklear earned his credentials at Canisius, including a BA in psychology, another in business marketing and an MBA he finished this year. He gained practical experience as a public relations associate for the Buffalo Sabres, a professional ice hockey team, and as a canvasser for a political campaign. He added to that knowhow as a marketing and communications associate and later coordinator with the $5 Million Startup Competition, a shark-tank style program designed to keep high-growth companies in Buffalo, New York. After coming to Philadelphia, he became project manager for NaturAll, a haircare and beauty products firm based in North Philadelphia, near Temple University.

The Avenues offers Locklear a chance to blend his business acumen and cultural heritage. “The café is totally influenced by my upbringing. You see lots of natural elements in here,” he said, pointing to a handsome table made from a fallen walnut tree.  “You can listen to Indigenous flute music here as well as classical jazz.”

Locklear also strives to limit waste, a value learned in childhood. “I’m strategic in placing [food] orders. I work with Too Good To Go, a service that connects surplus food from grocery stores, cafes and other businesses to the public so the food doesn’t go to waste. If I have baked goods left over, I take them to the firefighters at Engine 09 on Germantown Avenue.”

Moses Jonah BuffaloBoy, of Mt. Airy, the café's barista, deepens the business' Indigenous dimension. “I was born in Maryland and grew up in New Jersey,” said BuffaloBoy, who has nine siblings. “My father is from the Oglala Lakota tribe of South Dakota. It was a challenge growing up with a Native heritage. I took a lot of teasing from classmates about my name.”

BuffaloBoy, who came into the café to buy a coffee and then was hired by Locklear, finished high school in New Jersey and came to Philadelphia at age 19. He took a few courses at Community College of Philadelphia but began to paint and work different jobs, such as manager of the Chestnut Hill Starbucks, to pay for paints and canvas. He also does woodcarving and beadwork.

“My mother fled from Maryland with me and my brothers and sister one night because my father was abusive,” he said. “We slept in shelters until my mother got on her feet. She’s since remarried and now coordinates services for women who’ve faced domestic abuse in Camden County. My step-dad taught me how to be a man.”

Walks in the Wissahickon as well as ancestral memories inspire paintings for BuffaloBoy, who sells his work worldwide through Etsy. His paintings, some of which blend strong Native faces with abstract designs, hang on one wall of the Avenues. “Painting is a healing process for me. Sometimes, a person will look at one of my paintings and burst into tears.”

In the future, Locklear aims to host art shows, poetry readings, concerts and other events. On Sept. 24, for example, he held a workshop on building a terrarium. “I'd like to use this business to help underserved communities.”

Locklear says he is doing communication and marketing through social media and says a website is in the pipeline. His GoFundMe page is gofund.me/ee92bf6f.