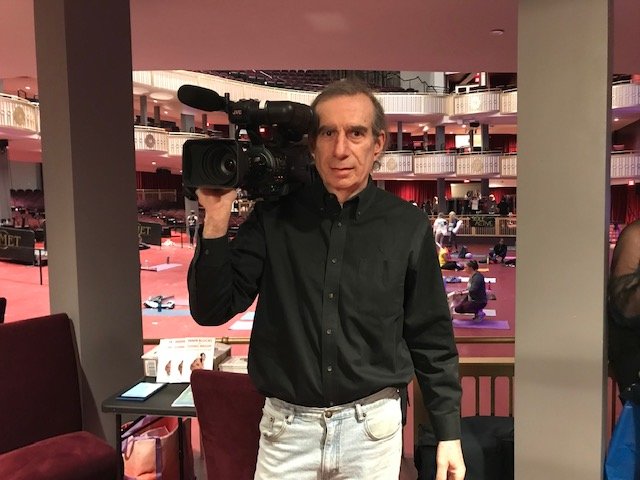 This year, Holocaust Remembrance Day, Yom HaShoah, starts at sundown on Wed. April 27 and ends at sundown the following day. It is a solemn day, one on which to remember Holocaust survivors, and victims, as well as hear testimony from painful pages of history.

Mt. Airy cinematographer Abe Holtz has a long tradition of doing just that.

In early 1996, Holtz began working with the Survivors of the Shoah Visual History project, which director Steven Spielberg started after the movie Schindler's List to document the experiences of Holocaust survivors. Between 1996 and 2001, Holtz shot approximately 400 interviews for the project. Altogether, what is now the USC Shoah Foundation – The Institute for Visual History and Education, has recorded more than 52,000 interviews worldwide - anywhere a survivor was willing to come forward and give testimony.

“I, myself, had lost about 100 family members in the Holocaust,” Holtz said. “It seemed to me that since I wasn’t around to help them then, I could at least help keep their memory alive by being part of this project."

The hours-long interviews recorded on videotape in people’s homes preserve the stories of survivors, military concentration camp liberators, and “righteous gentiles,” a term that refers to those who either hid, or protected Jews during the Holocaust. The participants talk about their pre-war lives, their wartime experiences, and what their lives were like up to the present day.

"Because of the constant barrage of Holocaust deniers, we needed to record these testimonies from those who had actually lived it, not from second hand sources,” Holtz said. “By the 1990s, we had already lost so many survivors that it was literally a race against time to interview as many as possible who agreed to come forward."

While many survivors did come forward, some did not, finding it too difficult to recount their experiences. Holtz said he is ultimately grateful to the survivors who felt comfortable enough to share.

"These testimonies now survive in perpetuity to remind the world of the horrors of a genocide that we thought would be impossible to replicate here in the 21st century,” he said. “But as we commemorate Holocaust Remembrance Day 2022, we are witness to yet another genocide - in the same part of the world - that brings back all the horrors that I thought we’d never see again, this time into our living rooms, on HDTV."

Raised in East Mt. Airy, Holtz majored in film at Hofstra University, but found little chance for employment after graduation.

Returning to Mt. Airy, where his parents ran R-H Automotive Parts, formerly located at 7133 Germantown Avenue, (the R-H stood for Ruth and Herman), Holtz started accumulating movie equipment. As he remembers, "once the word got around that I owned a camera and could load it, all these independent filmmakers came out of the woodwork asking me to shoot their projects, and that’s how it all started."

In 1987, Holtz produced a documentary with Mitchell Holzman, entitled Echoes of a Nightmare. The 25-minute short uses footage that Holtz shot of a 1978 white supremacists rally in Chicago. The movie is a harrowing examination of racial hate and free speech in America. As timely as ever, the documentary is about to undergo a new 4K restoration and rerelease.

Like any true movie lover, Holtz says the filmmakers he admires are too numerous to mention, but that he's "always been partial to [documentarians]... Barbara Kopple, Frederick Wiseman, and the Maysles Brothers. Documentary filmmakers have to struggle with limited budgets, minimal equipment, and sometimes years of struggle to get their projects completed, so my hat’s off to them."

Reflecting directly on this week's Holocaust Remembrance Day, Holtz focuses in on the work still needed for the future.

"Truly, I think the best way to combat anti-Semitism is education, and the earlier the better,” he said, noting that while several states have programs in place to educate the young, not all of them do.

“I wish there could be a nationwide push to do this,” he said. “It’s up to the next generations to keep the memory of Holocaust survivors alive, so that the ordeal of the survivors will never be extinguished."

To commemorate Holocaust Remembrance Day on the 27th, Beth Tikvah B'nai Jeshurun will host guest speaker Celia Kener. Born in Poland in 1935, Kener will recount her story of the 1941 German invasion, eventual liberation, and later immigration to the United States. The event will be held in person, as well as live streamed.

Also on the 27th, the Germantown Jewish Centre will host a Holocaust Survivor's testimony with a direct connection. Their ZOOM-only program, "The Pursuit of Justice: Judy Meisel's Story" features Ben Cohen discussing his grandmother Judy Meisel's experiences escaping the Nazis, being liberated in Denmark, coming to America, and becoming an educator at, and activist with, the Germantown Jewish Centre.

Cohen is currently working as the Director of Arts, Culture, and Enrichment at the Minnesota Jewish Community Center. He is also a filmmaker and has dedicated several years to documenting and telling the story of his grandmother and their family during and after the Holocaust.