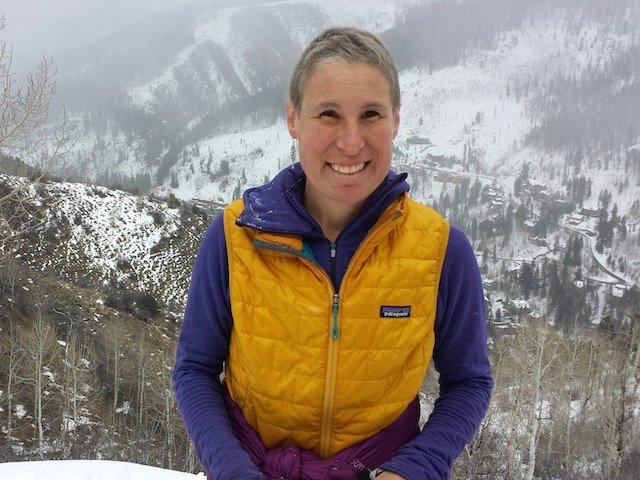 Cheryl Pinkus said when her daughter Jennifer was diagnosed in April 2015, she began writing an online blog detailing her daily “battle with cancer.”

“This is her journal,” she said. “I believe it is very different because it’s raw and honest. It shows Jen’s courage as she faces her fears, the unknown and finally death.”

Jen’s aunt Helaine Greenburg, Cheryl’s sister, spent a year editing the journal for grammar, but keeping Jen’s voice – a voice you can clearly hear as she talks about trying to work part-time between chemo treatments, lathered in sunscreen covered in a long sleeve shirt, “sweating like crazy, armed with toilet paper and prayers,” desperately trying to work around being sick and still hoping to meet friends for a ride.

She writes, “OK. Third lap, Wow, I’m a rock star. Fourth lap, not feeling so good. Stomach going crazy. Catch your breath and try to ride back to the car. You can do it! What hat do I wear into the gas station? Shit, I forgot my hat! Making it into the house! Made it!”

The title of the book “Sending” is a generic term for successfully completing a vertical rock or ice climb.

While the book is self-published, Cheryl Pinkus and Greenburg sent a proposal to the secretary of Cheryl Strayed, the author of the book “Wild,” which tells the true story of Strayed’s decision to hike the Pacific Crest Trail from the Mojave Desert through California and Oregon to Washington State by herself after the death of her mother and end of her marriage. Cheryl Pinkus and her sister wrote that Jen read the book “Wild” over and over again because she felt like she could connect with the author’s “adventurous spirit.”

“Jennifer approached her struggle against cancer with the same determination and emotional strength she used when tackling the most challenging mountain,” wrote Cheryl Pinkus and Greenburg in the letter. “After her first round of chemotherapy, the doctors felt positive about her prognosis, but soon learned that the non-Hodgkin’s lymphoma had transformed into an aggressive large cell B cancer. Jen was determined to continue her outdoor activities with her friends while facing decisions about treatments and hospitals. She hoped this book would help others face difficult trials with courage and strength and letting them know that they are not alone.”

Jennifer or “Jen “ was born on May 9, 1974, in Washington, D.C., where she lived until she was six years old, when the family moved to Northwest Philadelphia. Then, she attended Germantown Friends School from second to 10th grade. An avid sports player, she captained both the tennis and lacrosse team at Abington Friends School before graduating in 1992. Later, she earned a bachelor’s degree in sociology at the University of Vermont where she honed her skiing skills.

Jennifer’s father, Ralph Pinkus, recalled his oldest daughter’s first week’s home after graduation, trying to decide what to do after college: “Every three days, she would say, ‘Maybe, someday I like to be a ski instructor.’ And I finally said, ‘Shut up and go out and do it.’”

Ralph said his daughter’s zest for life took her on adventures around the world. Besides spending a semester abroad in Aix in Provence, France, studying French and traveling throughout Europe, she taught English to children in a small town in Kenya, worked as an au pair for a family in Verbier, Switzerland, biked through Croatia with a friend, worked in a factory in Israel packing helmets, and traveled to China, Thailand, Morocco and New Zealand.

He said Jen was a free spirit, who lived in the moment.

“She was determined to do things, despite obstacles,” he said.

He recalled a mountain bike race she was determined to win in Aspen, Colorado. She was on allergy medicine during the summer. Jen participated in the race and won a medal, but when she got off the bike, she collapsed. She ended up in the hospital because she was so dehydrated.

But skiing, skinning, mountain biking, rock climbing and other activities are what made Jen feel alive. She decided to go on a climbing trip to the Black Canyon of Gunnison National Park, despite her white blood cell count being low the last time they checked it, writing that “Ignorance is bliss and Life is short.”

Jen’s poem “Above the Gunnison” gives readers a rare glimpse into her spiritual and physical journey.

Several blog entries have comments from friends and family including one that states “You’ve touched our hearts with your grit, your go-for-it spirit and generous, genuine way you’ve let us in. Our lives are changed (and maybe we’re a bit braver) because you’re making it through. With love… – Baylee, September 2, 2015.”

Jen’s mom, Cheryl, said she had the innate ability to make everybody laugh just by being Jen. In one blog entry that Jennifer entitled “Chemo Brain or Just Me?” Jen wrote that her nickname during most of her life used to be Amelia Bedelia because she took things literally. Jennifer recalled her mother giving her quarters to feed the fish in the pond, and instead of buying fish food out of the dispenser, she wrote, “I fed the quarters to the fish.”

As an athlete, Jen was used to tolerating a high level of pain in order to achieve her goals. Her father Ralph thinks this may have caused a delay in her cancer diagnosis.

“Jen thought maybe she had appendicitis,” Cheryl said. “Stoic Jen had to leave a group she was teaching on a mountain because she was in so much pain. They carried her down the mountain and took her directly to the hospital.”

In addition to being an extraordinary athlete, Jen was a gifted painter, photographer and writer.

“I don’t think she really understood how creative and talented she was,” her father said. “That’s part of the sadness that we live with that she never realized her own abilities. She was a great ski instructor.” Families that she taught skiing to her loved her. She acquired a wealthy clientele that kept her busy almost every week.”

Despite the cancer that ravaged her body, Jen’s heart and will to live was incredibly strong.

Cheryl said their younger daughter Lauren “left her baby” to be with them and “hold Jenny.”

A verse from Jen’s poem “Send:”

Look for feet and keep moving up

Will that nut catch me if I fall

Will the Adriamycin make my lymph nodes small

Look for feet and keep moving up

You either send or you die

So if you fall

Place your feet and keep moving up

Because you have no choice

“Sending: An Athlete Confronting Cancer” can be purchased online for $19.98. A portion of the book’s proceeds will help support the Leukemia/Lymphoma Society and the Roundup River Ranch in Gypsum, Colorado – a camp whose goal is to enrich the lives of children with serious illnesses by offering free, medically-supported camp experiences.