Most people are lucky if they know for sure what kind of career they want to pursue upon finishing high school. But Denise Mitchell, 54, a resident of Mt. Airy for the past 26 years, knew exactly … 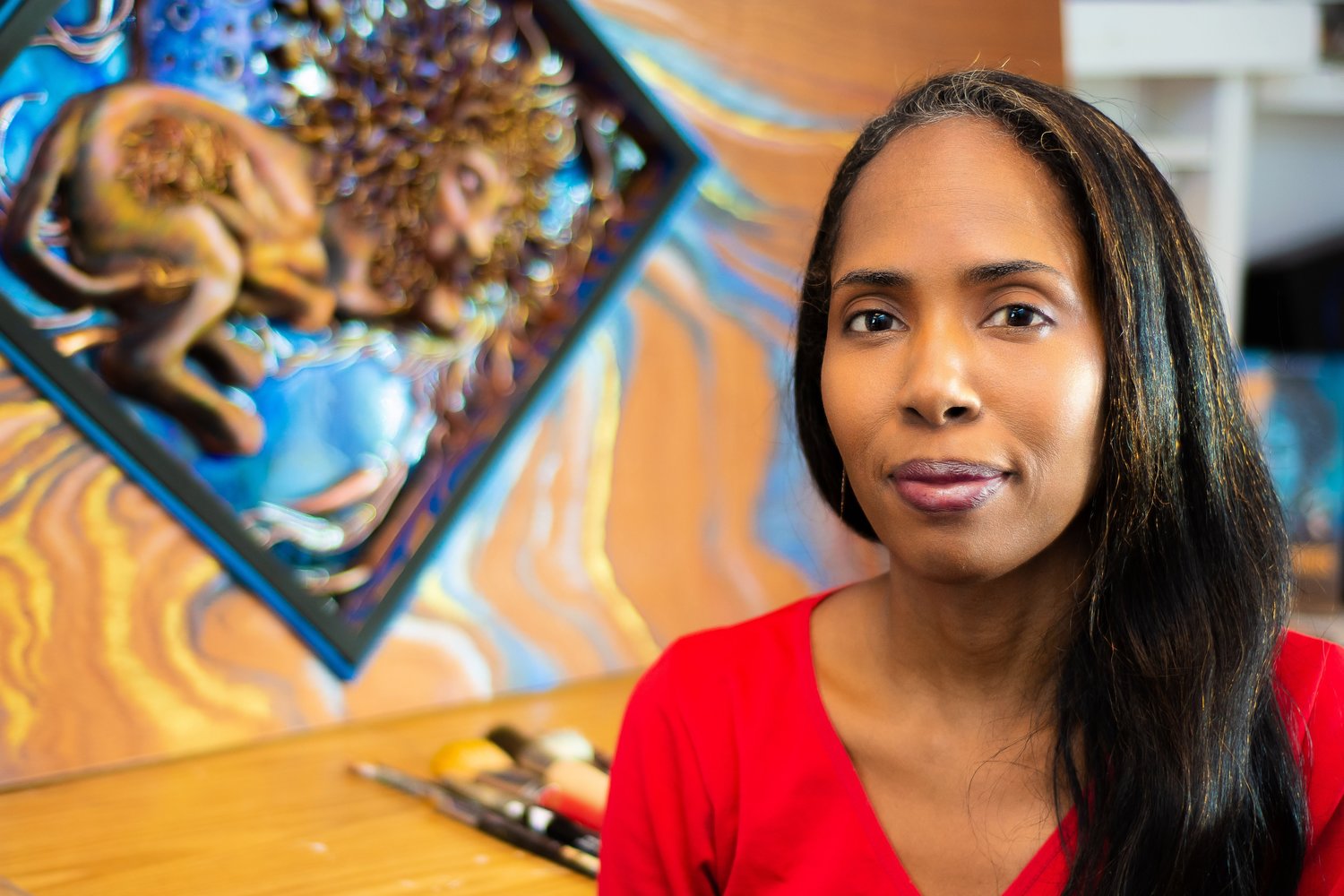 Long-time Mt. Airy resident Denise Mitchell is having a pop-up show of her mixed media art in her pop-up exhibit, “Earth As it is ... Question Everything,” which will continue through Nov. 1 at 6825 Germantown Ave. in Mt. Airy.
Posted Wednesday, October 21, 2020 10:25 am
by Len Lear

Most people are lucky if they know for sure what kind of career they want to pursue upon finishing high school. But Denise Mitchell, 54, a resident of Mt. Airy for the past 26 years, knew exactly what career path she would pursue almost from the time she was born.

“I always knew,” she insists. “As a baby in a walker, I am told, I stuck my hand in a bucket of paint and began laughing hysterically as I ate it! So yes, I have always had an 'appetite' for creativity (you might say). From an early age, I was intrigued with the concept of converting story into imagery. Consistently encouraged by my parents, my childhood was an engagement of art programs and a well-maintained resource of materials to explore various art forms.”

And during October, Mitchell's art has been a magnet for art lovers at her pop-up exhibit, “Earth As it is ... Question Everything,” which will continue through Nov. 1 at 6825 Germantown Ave. in Mt. Airy, formerly a yoga studio. The pop-up exhibit features Mitchell's stunning mixed media sculptural paintings, whose primary influences have been “Salvador Dali’s symbology through surrealism, Norman Rockwell's storytelling, the luster of Tiffany, the style of Art Nuevo’s energy and stylized flow of design.”

Mitchell has had showings of her work at Lock Haven University Art Exhibit 2006, PECO Energy Art Exhibit during Black History Month 2006 and private home showings. Prints of her two-dimensional works were available in certain retail shops and sold throughout the U.S. Her first solo art exhibit was in 2002 on the Campus of New Covenant Church in West Mt. Airy.

Mitchell's work has won various art contests and awards, “but I have not submitted or allowed my work to be placed in those environments for the last 14 years. I’ve been in the process of incubating what’s here today, not giving birth until it was ready.”

Mitchell grew up in West Oak Lane and attended Alternative East High School. She then earned a degree in specialized technology from the Hussian School of Art in 1987 after completing a four-year program majoring in illustrative design. She proceeded to teach illustration, drawing, art history and marker layout, among other subjects, at Hussian for seven years in addition to performing as a freelance commercial artist.

Mitchell's own art started out as two-dimensional work, but “eventually, I yielded to my nascent self, reawakening the inner thrill and experience through mixed media, which I refer to as 'finger paint macaroni and mud pies.' By embracing this, I returned to my primary encounter with art. My love for mixed media first developed under formal training in the Philadelphia Summer Arts program, which baptized me into the love of sculpture ... I discovered through mixed media that my sculptural paintings are a unique form of the very discipline that once frustrated me the most.”

How has the pandemic affected Mitchell's life? “The first lens through which I would be inclined to view the pandemic would have been frustration. However, throughout this period I could hear God saying to me, 'Don't curse it. There is a blessing in it for you.' So it afforded me the opportunity to seek out real estate vacancies for a pop-up. The pandemic has directed so many eyes to social media, where we were able to spread the word to many of our supporters who have been waiting over a decade for me to do another show.”

What is the best advice Mitchell has ever received? “Recently I was advised to re-evaluate how I view the time it has taken to create this body of work. A museum curator I met in Atlantic City asked me how long a particular work took. After I responded, he scolded, 'That’s incorrect. It took a lifetime! A lifetime of study, experience, experimentation, contemplation, evaluation, growth, etc.'”

What person has had the greatest impact on Mitchell's life? “My mother, like it or lump it. She made sure I had a solid foundation physically, mentally, socially and most of all, spiritually.”

For more details, visit artbydenisemitchell.com Len Lear can be reached at lenlear@chestnuthilllocal.com