Simone will be reading from the just-published “Waveland,” her fourth novel, at the Big Blue Marble Bookstore, 551 Carpenter Lane in Mt. Airy, on Wednesday, July 1, 7 p.m.[/caption] by Len Lear … 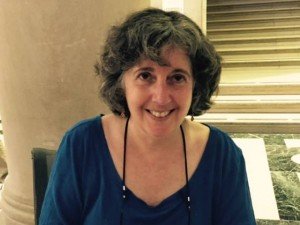 Simone will be reading from the just-published “Waveland,” her fourth novel, at the Big Blue Marble Bookstore, 551 Carpenter Lane in Mt. Airy, on Wednesday, July 1, 7 p.m.[/caption]

I have to ransack through the closet of my memory to recall a more interesting person than Simone Zelitch, 52, who has lived in Mt. Airy with her husband, Doug Buchholz, for 15 years. Simone is an Associate Professor of English and former Assistant Chair of Literature and Creative Writing at Community College of Philadelphia. She has also authored four novels, the latest of which is “Waveland.”

All of her novels are historically based, but “Waveland” is the first to have a Philadelphia connection; the central character, a Freedom Summer volunteer during the Civil Rights era in the deep South, ends up in Mt. Airy, where she puts her life back together and tells her daughter stories that are her way of making sense of her time in Mississippi and the years that followed.

Simone will be reading from “Waveland” at the Big Blue Marble Bookstore, 551 Carpenter Lane, on Wednesday, July 1, 7 p.m. (She will be reading with Jonathan Papernick, author of “The Book of Stone,” also recently released.) We recently conducted an interview with Zelitch, from which the following was taken:

Where did you grow up?

I grew up in Northeast Philadelphia on the side of the Boulevard that was primarily Jewish; the other side was Catholic. I can't say I have fond memories of that neighborhood. It felt claustrophobic. The houses all looked alike, and one of my criteria for my adult life was that I wouldn't live in that kind of neighborhood. These days, the Northeast is far more interesting, with Brazilians, Indians and folks from just about every former Soviet Republic moving in and opening restaurants and nightclubs. I think our synagogue turned into a Korean church.

Is the Freedom Summer volunteer in "Waveland" based on a real person?

No, though possibly elements of myself, projected backwards ... The character of Beth is a response to my own experiences both in the Peace Corps and as a teacher of working class — primarily African American — students at Community College of Philadelphia, a consideration of power dynamics and also an understanding of my own arrogance and limitations. To some extent, writing is time-travel and speculation for me. Who would I have been in 14th century England, in biblical Sinai, in pre-war Hungary (referring to her previous novels) and in this case, in 1964, when in real life I was two years old? Beth and the circumstances in “Waveland” are also the product of years of research and fieldwork. The novel was eventually vetted by some real live Freedom Summer volunteers, and I was relieved when they said I pretty much got things right, both actually and emotionally.

Growing up, did you always want to be a writer?

First, I wanted to be a dog trainer and then a psychiatrist, but in the end what interested me was observing people and their behavior without intervening. I always felt like an outsider, and I always loved to read. It amazed me, the degree to which I felt understood by books I read. I memorized whole passages, and somehow, that connection led to writing sentences and paragraphs of my own. As a nerdy, socially awkward kid, writing was a kind of leap of faith. I believed that there were people, somewhere, who spoke my language, if I could figure out how to reach them. For the record, I was right. One of the coolest things ever is finding out that someone you never met has read your work and tells you things about it that you never knew. It really happens.

I read that you lived in Hungary in the 1990s. What was life like there?

I was in the Peace Corps in Hungary between 1992-1994. I taught English at a university in a town west of Budapest. The Soviet Union had just collapsed, and for Hungary, it was a period of enormous transition. Part of my work was training former Russian teachers how to teach English because Russian was no longer a required language. Many social programs were in the process of being dismantled while I was there, and although many Hungarians were fascinated by American culture, they also were aware that their own history and culture could easily be dismantled as well.

Did you encounter any anti-Semitism in Hungary?

I actually wrote a piece about this for NPR. I saw a lot of abandoned synagogues and Jewish graveyards but no live Jews. Given what I knew about Hungary's past, the silence around it felt pretty deafening. Then, at some point, during a conversation about minority groups in Hungary, my students asked if we were going to talk about "the Jewish problem." They made it clear that Jews were the problem. I just listened to the typical "they're-all-rich/they're-all-Communists" litany, trying to figure out the best way to respond. It wasn't until a few weeks later — during Hanukah — that I taught them the Dreydl song. They dutifully sang it, and ultimately, it was my way of coming out as Jewish. I can't say this led to any direct discrimination; after all, I was in a position of power as a teacher and an American. But it did lead to an interesting encounter with a student I barely knew who, as it turned out, was a live Jew and who introduced me to her family.

Is "Louisa" (an earlier novel) based on a real person?

No. None of my books or characters are based on real people. Emotional circumstances are real, though, always. The novel is set in Hungary, though, and my experiences there helped create the setting, though I also did a lot of research on Hungarian history, as well as the history of Zionism and of Israel in 1949 when the central character, Nora, a chain-smoking Holocaust survivor, emigrates there with her German (non-Jewish) daughter-in-law, Louisa.

Is your husband also a writer?

No, Doug's a reader. He's a fabulous teacher who doesn't touch a computer and has the most active intellectual life I know. Along with teaching his composition students “Sons and Lovers,” he's also making is way through Balzac's “Human Comedy” this summer.

What do you like and/or dislike the most about living in Mt. Airy?

What I like most is getting up on a Saturday in June and hitting half a dozen yard sales before swinging by the farmer's market to pick up some strawberries. I also love the green space combined with the benefits of clearly living in a city. Before I moved to Gowen Avenue, I was at 12th and Pine, a great neighborhood but mostly white folks of a certain age. Here, there's far more variety in age and ethnicity. What do I dislike? Well, I do miss effortlessly doing center city things, like going to readings or concerts. The train station is ridiculously close to our house, but I like the house and the people in it. It's hard to leave.

What are your thoughts about the ongoing, never-ending conflict between Israel and the Palestinians?

Seriously? Ask me after I get back from Hebron in mid-August. For now, I'll just say that we skim the surface, read a few blogs by people who say what we already believe and have opinions. We're afraid to face things that may make us uncomfortable. By "we,” I mean Americans. I can't speak for Palestinians or Israelis, for whom this is far from a hypothetical question.