Carole and Barbara Lindner still sing folk songs from around the world once a month with 20 other folk music aficionados in their Mt. Airy living room. by Len Lear According to federal government … 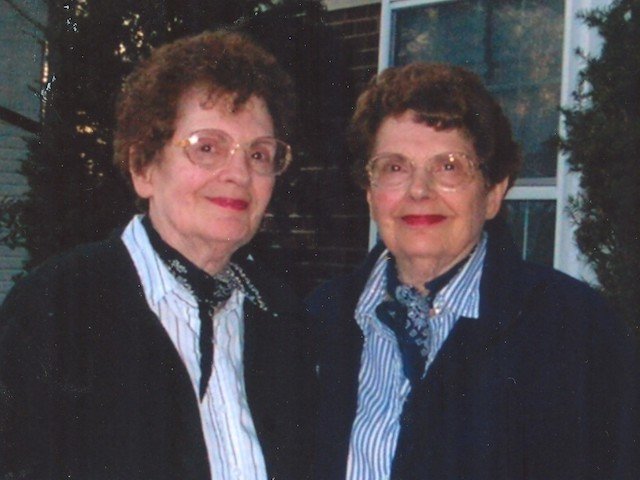 Carole and Barbara Lindner still sing folk songs from around the world once a month with 20 other folk music aficionados in their Mt. Airy living room.

According to federal government statistics, there are approximately 1.3 million sets of twins in the U.S., which works out to about eight-tenths of 1% of the nation's population. Not as rare as a 5-foot-tall professional basketball player, but definitely not as common as cell phone users.

According to Carole and Barbara Lindner, twins who live in a beautiful East Mt. Airy home, “Since we were babies, we've been stared at, questioned, sometimes even felt uncomfortable. People have asked, 'Are you sisters? Twins? Who is older? What are your names?' Others have often said, 'Aren't they cute?' even as adults.”

Carole and Barbara, who will not reveal their ages, were born in New York and raised in Miami, where their mom (“our muse”) played piano, sang, danced and taught her twins to sing in French and German. The twins later became professional musicians and “good will ambassadors” in many places where the people didn’t expect anyone from the U.S. to know much about them, much less sing to them in their own language – Hungarian, Greek, Turkish, Polish, Bulgarian, etc. The twins have visited two dozen countries as well as most states in the U.S.

“It is a key to embracing the world. People in other countries were astonished that we knew the songs in their languages. Taxi drivers would pick us up, and we would break into song in their language.”

The sisters moved to Philly in the 1960s because “we learned that the people in Philadelphia were interesting. After living in the South, we saw a black person who was not a domestic for the first time. That was fabulous! It seemed like a miracle!”

“We saw blacks and whites dancing together for the first time and loved it! We knew we were not in Miami for sure.” (The twins were brought to our attention by Gloria Rohifs, a Mt. Airy resident who is an accomplished artist and musician in her own right.)

One evening, when two African American sisters (who looked like twins), Doris Levister and Elena Verzieri, were at Carole's house, the four women began singing together, “and much to our amazement, it sounded like we were all from the same family. We had the same sound. Amazing!”

As a result, the four formed a folk music group, the Songspinners, who performed professionally for four years in the 1970s. Carole and Elena played guitar, while Barbara played maracas and was the lead singer. They performed for telethons and other TV shows, in churches, synagogues, on a fishing boat just off Atlantic City, a house party on the Main Line, etc. 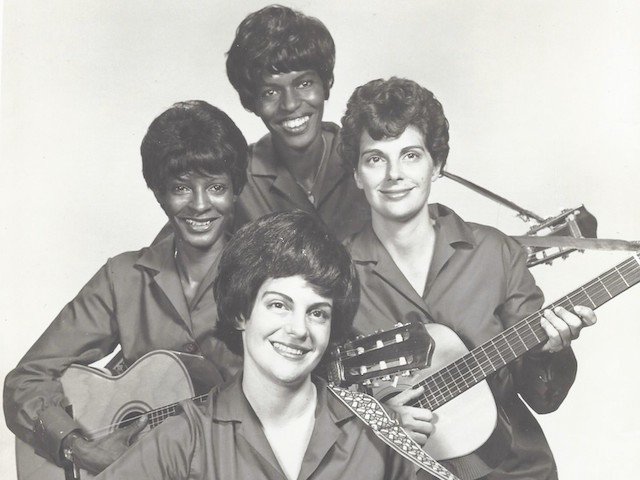 Carole and Barbara Lindner with Doris Levister and Elena Verzieri made up the Songspinners, who performed throughout the Philadelphia area for four years in the 1970s.

“We never made a record,” said Carole, “but we have our shows and our singing on many tapes. We do have a DVD or VCR of our performing on a telethon. We also saved some of our ads that were in the neighborhood papers.” (The quartet may have even been unique. I was not able to find a record of any other quartet in music history with white twin sisters and two black sisters.)

“It was fun but very hard work and time-consuming,” Carole said, “since we also had day jobs at the time.”

Carole was an elementary school teacher, first at the Howe School in Olney and then at the elite Masterman School in Spring Garden. She got her B.A. at the University of Florida and then a master's degree in education from Columbia University. She eventually became an instructor at Masterman Demonstration School.

“It was a 'Demonstration School' because we always had student teachers, and also it was a school that usually had other teachers come to observe us.”

Barbara also went to the University of Florida and won a prestigious scholarship. She left three months before graduation, however, got on a bus and went to Chicago, There she worked as a typist for an insurance company, then in an Italian restaurant and eventually opened her own Italian restaurant with two other women. That lasted for five years.

Five years ago, Barbara moved in with Carole, who had already been living in Mt. Airy for many years. Both twins have a laundry list of interests such as fishing at Green Lane in Montgomery County (“our record is 41 fish caught at one time”), folk dancing, painting and sculpture (their art work is displayed in their exquisitely appointed house), cooking and dining out (they particularly like Yu Hsaing Garden, La Puebla, Thai Kuu, Knishes & Dishes, Cin Cin, Carrabba’s, Bonefish Grill and Pho Ben City in Abington), attending the theater, group singing (“Many of us have been getting together once a month for 20 years in the living room here to sing. We know thousands of songs by heart”), exercise classes and playing musical instruments (they both play guitar, recorder and piano, among others).

Carole was once married and divorced, and Barbara was “close to being married.” Neither one has children.

One of the twins' greatest thrills was going to Twinsburg, Ohio, a town that is visited on the first week in August every year by thousands of twins and triplets from around the world.

“We were so proud to be at Twinsburg and finally be with people like ourselves,” they said.