One day last March, just about the time the pandemic was starting, Isaiah Gregory was cleaning his car and posted it on Instagram. “People started contacting me, asking how much I would charge to do their car,” said Gregory, “but then I started doing much more than cleaning." 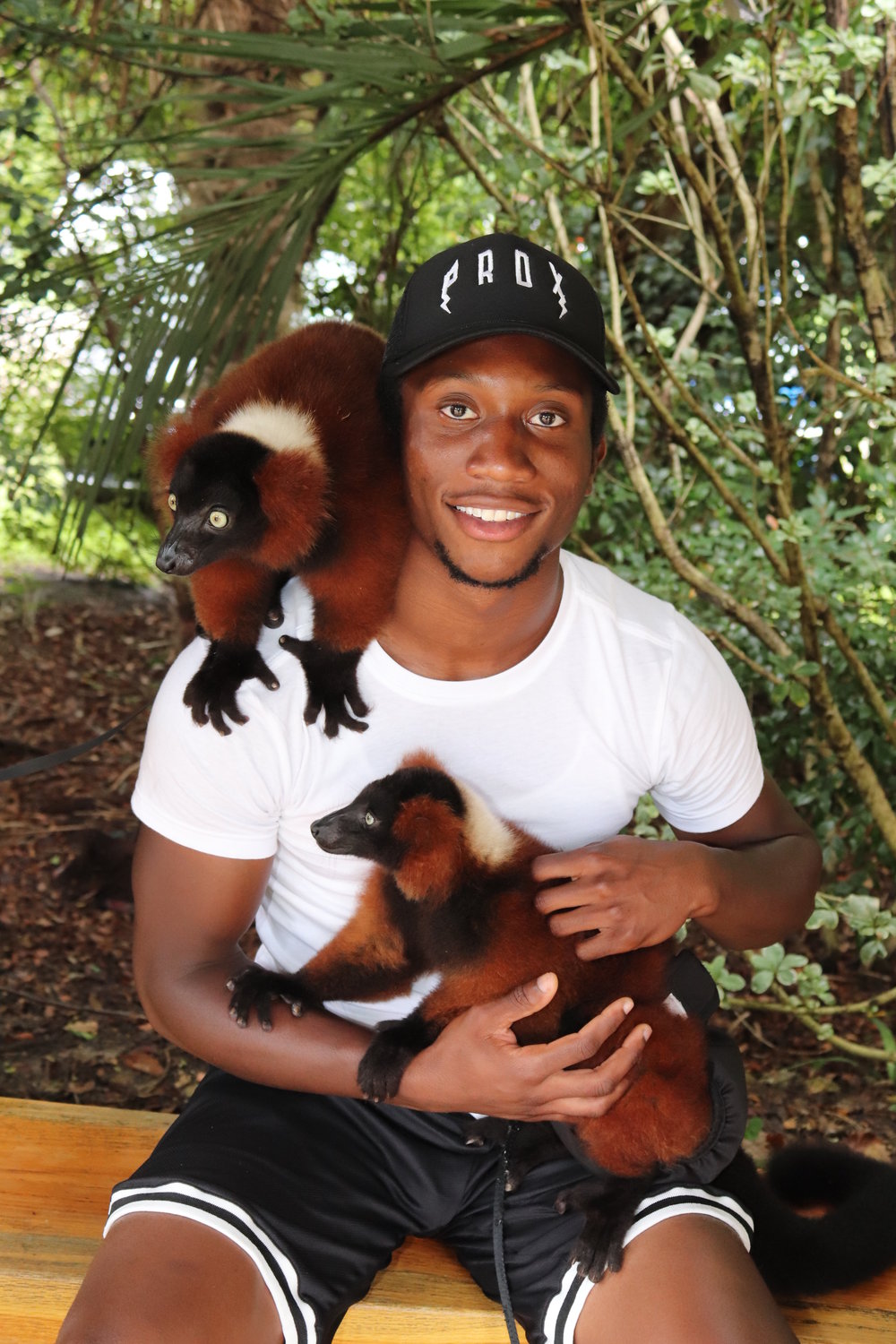 An animal lover in addition to a detail man, Gregory makes friends with two lemurs at an animal sanctuary in South Carolina.
Posted Thursday, August 5, 2021 8:30 am
by Len Lear

Isaiah Gregory, 23, has always been an exceptional athlete. He grew up in West Oak Lane but played center field and pitcher for the Chestnut Hill American Legion team that won a league championship in 2015. Gregory, who is 6-foot-2 and lean, was also a shooting guard on the JV basketball team at Martin Luther King High School, where he also played on the varsity soccer team, ran track (200 and 400 meters and 4 x 100 meters) and was on the wrestling team. As if that were not enough, Gregory was an All-Public baseball player for each of his four years at MLK. In his senior year he batted over .400, a spectacular achievement in any league.

After high school, Gregory played baseball at Lackawanna Jr. College in Scranton for two years and then at La Salle University, where he was a digital art and media graphic design major. He did not graduate, but he plans to go back to La Salle to get his degree.

Still scratching his sports itch, Gregory is currently playing for a flag football league in West Oak Lane, the Untouchable Cobras. The team was undefeated until they recently lost in a tournament championship game in Denver. The indefatigable young athlete is also playing currently in two men's baseball leagues in Roxborough and Delaware County.

But one day last March, just about the time the pandemic was starting, Gregory was cleaning his car and posted it on Instagram. “People started contacting me, asking how much I would charge to do their car,” said Gregory, “but then I started doing much more than cleaning. I wound up doing full detailing inside and out.” Gregory started a company called Zetailed, a combination of “Zay,” Isaiah's nickname, and “detailed.”

For those who may not know what detailing involves, it may include in addition to washing and waxing, headlights restored, ceramic coating, wheels and wheel wells cleaned and dressed, door jambs cleaned, window wash, interior vacuumed, interior surfaces wiped down, interior polish, mirror and trim cleaning and tire cleaning and maybe even removing spray paint and graffiti.

For small nicks and scratches, detailers apply drops of touchup paint. Larger areas get paint and a clearcoat that's then sanded and waxed. (For more severe damage, you'll have to go to a body shop.)

Most experts recommend that you have your automobile detailed roughly every 4-6 months. That being said, any detailer would say that you can never have your car looking too nice. Gregory's customers include popular rap singer Lil Uzi Vert, who has several very pricey cars, former Eagles safety Will Parks and five other NFL players.

A local resident, Jack Giovinetti, told us, “Zetailed is by far the most detailed service I've ever experienced. You will feel 100% like family the second you pull up and 110% satisfied when you leave. I highly recommend it.”

“I have been busy every day,” said Gregory. Gregory lives with his mom and has a sister, 32. He never knew his father. He had a brother “who seemed to be the happiest person I knew, but he committed suicide. He wanted to travel a lot but did not get to, and that fuels me. I love traveling and letting my brother see these places through me. Life is short. You never know what will happen.”

This year Gregory has traveled to Aruba and Jamaica and will go to St. Lucia, he hopes with a camera crew and videographer to put it online. “I love scuba diving in Aruba and free diving with sharks in Florida. I plan this year to also go to Mexico and Turks & Caicos and maybe Paris in the fall.”

Some friends call Gregory “Dr. Doolittle” because he is a passionate animal lover. Growing up, he had at least five animals at one time (and a very understanding mother). He had dogs, cats, a rabbit, snakes, a hamster, fish, birds and turtles. Today he has three dogs, two cats, a hamster and two fish tanks. “When I am away, my mom takes care of them.” Isaiah says he “eats chicken but no beef.”

Gregory also has the unusual habit of going to restaurants by himself (and occasionally with a girl). “I enjoy myself. I like to do a lotta things and have fun, spread peace and positivity and smiles!”

For more information, call 215-512-1684. Len Lear can be reached at lenlear@chestnuthilllocal.com