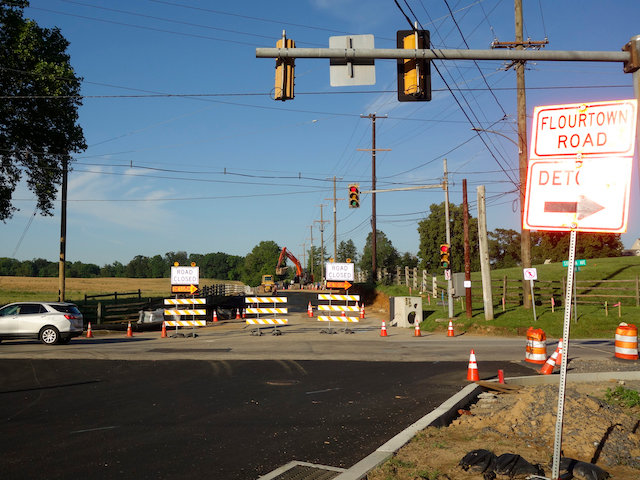 Whitemarsh resident Jim Stamos likes his Wawa coffee so much that he is willing to turn a five-minute trek from his Cricket Lane home nearest the construction zone at Stenton Avenue and Flourtown Road into a 20-minute trip to Flourtown for his java – but as of mid-July, he may need to make his own coffee.

While motorists have been slogging through a drainage and road-widening project on Stenton at Flourtown Road for months, in mid-June, Thomas Road that runs through Erdenheim Farm, leading from Stenton to Butler Pike and into Plymouth Meeting has been closed for road repairs and a drainage project.

Additional closures in the area – the continued closure of the historic bridge on West Valley Green Road, just east of Bethlehem Pike, and the closing of Butler Pike between Germantown Pike and Flourtown Road – have created a perfect storm of gridlock that shows no sign of easing up anytime soon.

Residents were voicing their feelings quite vigorously on social media and at the most recent township meeting in which traffic, flooding and continued development were issues of concern.

Another headache announced by PennDOT Wednesday was that Stenton Avenue between Flourtown Road and Mill Road will be closed all day, every day, starting July 19 for at least six weeks.

When told of the latest in road closures, Stamos was a bit dumbfounded.

“Thanks for the news, I think,” Stamos said as he headed to work in Plymouth Meeting just after 7 a.m. “Why am I not hearing this from the Township? It’s normally a 15-minute drive, but now it’s 45-minutes or more. Every artery is clogged.”

Amidst the buzz of construction vehicles Robert Fink was leaving his Cricket Lane home by 8 a.m. to get to his job in Norristown before the line of traffic got even heavier.

“It’s a pain in the butt, plain and simple,” said Fink, whose 15-minute commute to Norristown has turned into 35-plus minutes and even longer on the return commute. “I just try to leave early and I still have to maneuver my way through because of Butler Pike.” 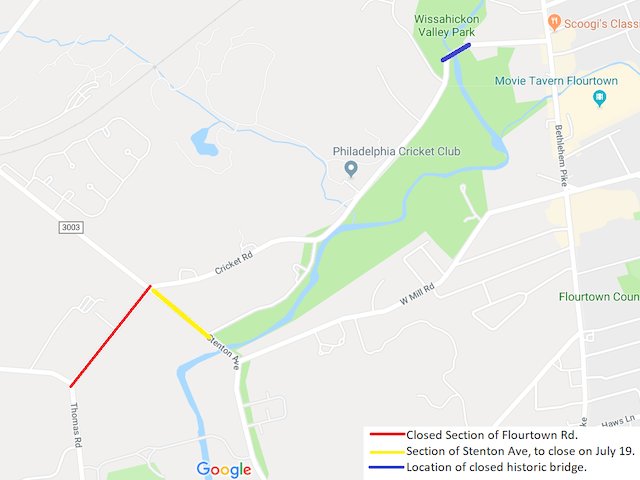 “It’s unfortunate that all of these projects and closures are happening at once,” said Whitemarsh Township Police Chief Christopher P. Ward. “In the long run the goal is to improve drainage and try to prevent closing roads due to flooding. Additional turn lanes and modernizing the lights at Stenton Avenue and Flourtown Road will improve overall traffic flow in the long run.”

Ward urged residents to get on the township website to sign up for email and text updates.

But even the updates are not enough. Residents are particularly upset by the amount of time it’s taking to repair the historic bridge over the Wissahickon Creek between Cricket Lane and Bethlehem Pike.

The steel truss bridge, built in 1884, has been closed and reopened a number of times and was most recently closed in March of 2018. Montgomery County attempted to reopen the bridge with weight restrictions, but those attempts failed when numerous large vehicles ignored the warnings and collided with structures built at the approaches to the bridge.

The county hopes to have preliminary engineering for replacement of the historic structure completed by March 2020.

Area resident Karen Tait said the construction and lack of movement to repair the historic bridge is more than a concern, it’s an emergency management issue.

“It’s been going on so long, and we never hear any more updates,” she said. “Nobody is giving us the straight story and last Thursday (June 20) the floodgates were down and we were trapped. We have a lot of older people in this neighborhood and trust me the water will come up again and those gates will come down.”

The floodgates Tait referred to were installed several years ago on Stenton Avenue just before the bridge near Mill Road and up to Flourtown Road. The gates come down when the water rises, as it did on June 20 trapping residents between the gates and the bridge.

Montgomery County officials said in a statement that they’ve asked PennDOT to find ways to ensure that first responders and others have access to Cricket Lane in an emergency.

“We have begun the process to make the necessary repairs to allow for emergency access only to the bridge by first responders with vehicles weighing less than three tons,” the statement reads. “The county engineer has identified repairs that can be made which would allow the bridge to be used in emergency response situations only, like the flooding event we experienced last week. The materials for those repairs have been ordered and should be installed within a few weeks.”

Whitemarsh’s Chief Ward said his officers do have plans in place to access the Creek Lane development.

“In an emergency, we have looked at additional pathways to get into that area either through the state park roads, on foot or on other types of vehicles,” he said. “We encourage residents to reach out to the website and social media and register to accept email and text messages. We need citizens to be the eyes and ears for us.”

To sign up for email or text updates, go to WhitemarshTwp.org. Contributor Barbara Sherf can be reached at Barb@CommunicationsPro.com