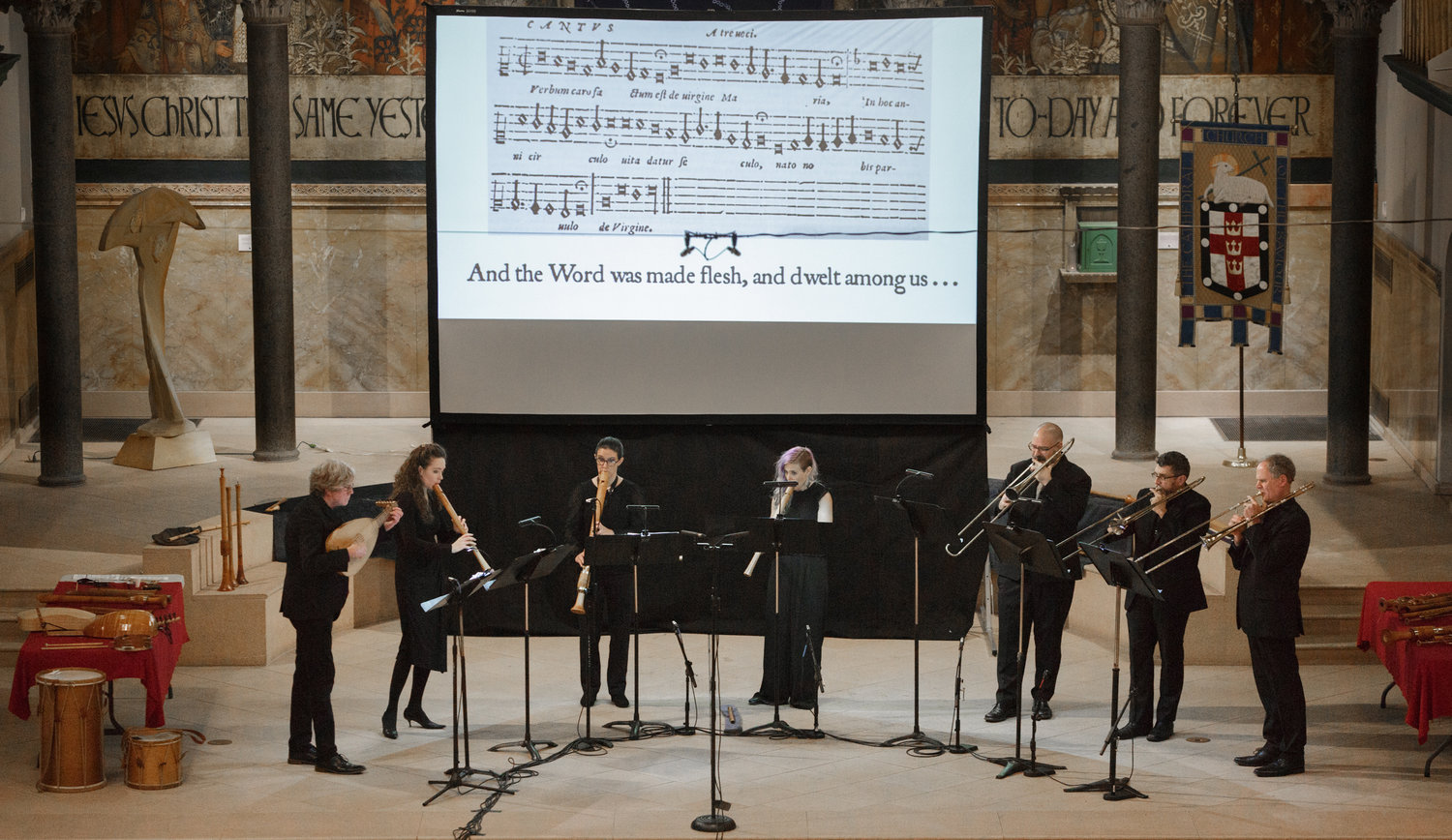 Piffaro evoked the spirit of Renaissance Italy in their Christmas concert. 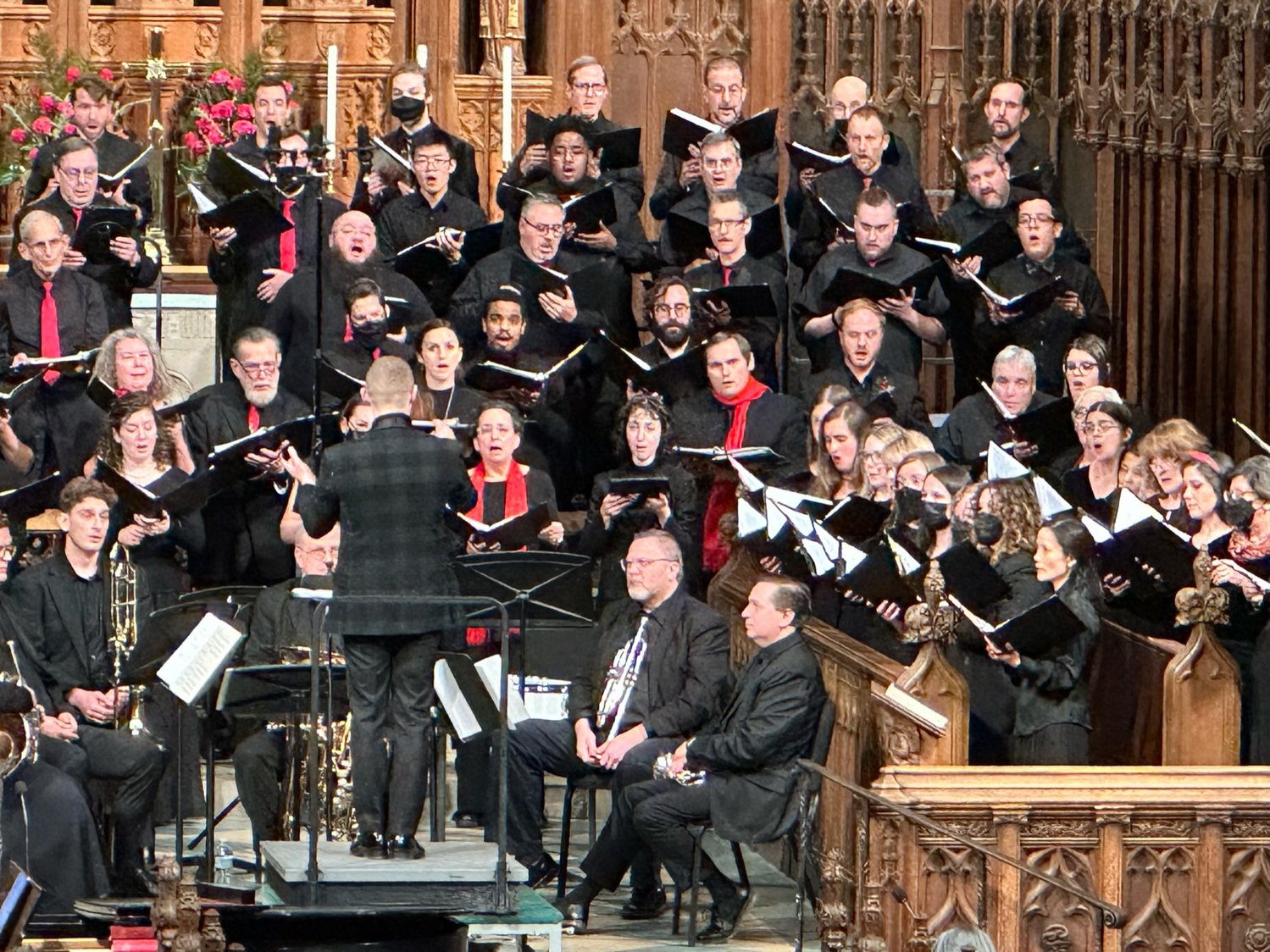 Two of Chestnut Hill’s most musically active churches hosted two popular concerts on Dec. 10. The Mendelssohn Chorus of Philadelphia returned to “The Hill” for two performances of its beloved annual “A Feast of Carols” at St. Paul’s Episcopal Church. Piffaro, the Renaissance Band, presented its equally beloved annual “Festa di Natale!” “down the Avenue” at the Presbyterian Church of Chestnut Hill.

Through the blessings of fortuitous scheduling, I caught the Mendelssohn Chorus’ second performance of the afternoon at five o’clock and then heard Piffaro’s seven-thirty performance in the evening. In their diverse ways, they projected the spirit of the season through well-chosen programs beautifully interpreted.

Artistic director and conductor Dominick DiOrio brought his 100-plus member choir, the Timberdale Brass, pianist Ting Ting Wong and St. Paul’s own organist Andrew Kotylo to perform a varied 90-minute program. The roster of pieces displayed the incredible breadth and depth of a repertoire that has been 2,000 years in the making.

Easter was established as a major holy day in the Christian calendar earlier than was Christmas. Even after the date of December 25 was set, it wasn’t until Saint Francis of Assisi proffered the Christmas creche of the manger in Bethlehem as the most beautiful image of the birth of Jesus that the day’s significance was more universally recognized. Our current fashion of celebrating Christmas owes more to Charles Dickens’ “A Christmas Carol” than to any specific action of any Christian Church.

DiOrio chose a program of music that spanned the centuries, inspired the spirit to hope for peace in a most un-peaceful world, evoked a deep well of emotions, and sent his 500-plus-member audience out into the world with a broad smile on its collective face and a spritely skip to its collective step.

DiOrio has molded these choral musicians into a choir that sings as one in repertoire both old and new. The blend, balance, dynamics, diction, lyrical phrasing and emotional projection were splendid in music of both simple directness and complex delineation.

As he always does, Kotylo played magnificently and the Timberdale Brass supplied festive support.

Newly appointed artistic director Priscilla Herreid was joined by fellow Piffaro core players Grant Herreid, Greg Ingles and Erik Schmalz for “Festa di Natale!” later on Saturday evening. They, in turn, were joined by guest artists Sian Ricketts, Heloise Degrugillier and Mack Ramsey. Together, they proffered lively renditions of one of the mostly expertly crafted programs of Christmas music I’ve ever had the pleasure of hearing.

In Renaissance Italy, the entire span of the Christmas season was celebrated. The panoply of the kingdoms, principalities, duchies, cities-states and republics — to say nothing of the Papal States centered in the Eternal City of Rome — participated in a societal event that involved everyone. The liturgies and festivities that surrounded them spanned the entire biblical narrative of the birth of Jesus in Bethlehem in the ancient Roman Empire 1,500 years before.

Herreid constructed a menu of pieces that covered that story in instrumental music based on the sacred choral works that were sung in cathedrals, chapels, monasteries and parish churches up and down the Italian peninsula. Italy may not have been a political unity at the time — more a geographic expression than anything else — but it was consistently unified religiously and, therefore, culturally.

“Festa di Natale!” began with a series of fanfares, then honored “Mary, Queen of Heaven.” The festivities were celebrated in public squares outside of a host of cathedrals where crowds reverenced Christmas Day itself. They hunted for food for the feast tables and awaited the arrival of the three magi from the East who had seen the Messiah’s star in the heavens and who had now come to worship him.

The playing of all seven musicians was exemplary Saturday evening. The transition from the co-directorship of Joan Kimball and Robert Wiemken to Priscilla Herreid hasn’t put a wrinkle in Piffaro’s high standard of technical polish and interpretive panache. The music was played with tonal security and rhythmic precision. The superb ensemble maintained its excellence from the start to the finish of every piece.

More important, though, Piffaro and its guests caught the sense of Christmastide joy expressed by Renaissance Italians through the music they both sang and danced to.