In response to neighborhood complaints about glare caused by the city’s new LED street lights, Deputy Streets Commissioner Richard Montanez has agreed to replace all the high intensity lamps. 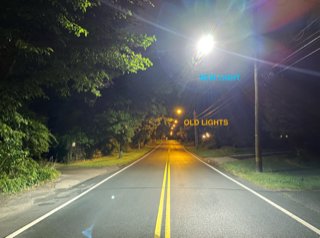 This strip of West Mermaid Lane, where an old light is juxtaposed with a new one, clearly shows the difference in the quality of light they produce.
Posted Thursday, August 11, 2022 12:00 am
by Carla Robinson

In response to neighborhood complaints about glare caused by the city’s new LED street lights, Deputy Streets Commissioner Richard Montanez has agreed to take out all the high intensity lamps he had planned for some streets in Chestnut Hill and replace them with fixtures that emit half as much light.

“We’re going to change the 18000 lumens lamps down to 9000 lamps as soon as we get the materials in, and then we’re going to move on to a different neighborhood,” he told the Local last Tuesday. “We’ve done the majority of it, we’re still waiting for the rest of the shipment to come in and finish the Chestnut Hill conversion,” he said.

“The councilwoman is in the process of scheduling that meeting and expects it to happen before the end of August,” said her spokeswoman, Sherylle Lynton Jones.

The Local has been covering the impact of new street lights in Chestnut Hill since the city started changing them early this summer, and has been tracking neighbor’s opinions with an on-line survey (which you can find at chestnuthilllocal.com/streetlightsurvey). As of press time on Tuesday, of the 213 people who have responded, 156 (73.2 %) say they wish they were warmer and less bright;  43 (20 %) said they were okay with the intensity but complained about the coldness of the light; 10 (4.7 %) said they liked the new lights as they are and 4 (1.9 %) had no opinion.

Lori Salganicoff, executive director of the Chestnut Hill Conservancy, said she’s spending that time researching how other historic communities have handled the conversion to LED lights.

“So far I’m finding that Philadelphia is almost 10 years behind in this conversation,” she told the Local on Monday.  “We want our streets to be as safe as possible,” she continued. “But the fact is these lights entirely change the character of every place they shine on. They change how it feels when you’re under them, and they change how everything looks.”

Montanez said that starting in 2015, Philadelphia began an annual program replacing about 2,000 of its old, high-pressure sodium light fixtures with LED lights - which are much more energy efficient, and can be remotely dimmed and monitored. Starting next year, the city plans to begin a major, city-wide conversion to replace all of its roughly 120,000 lights.

While the intensity of these replacement lights has been an issue, another problem is color. Light comes in a spectrum of color ranging from red to blue. Light output, or intensity, is measured in lumens, while its color is measured in Kelvins.

The old streetlights were 2200 Kelvins, which produces a warm and yellowish glow, while the new LED fixtures that the city has chosen to replace them with are 4000 Kelvins, which are more blue, but look bright white to the naked eye.

For many, it’s a light that is just too harsh.

“These lights significantly diminish every neighborhood that they’re in,” Salganicoff said.  “They create a proto-‘Blade Runner’ environment,” she said. “They make the neighborhood feel like it's in the midst of a police state.

“Seriously,” she continued, “That’s how they do it in the movies, when they want you to feel like it's a dystopian environment. They make the light harsh and blue.”

Montanez said the city chose the light color based on how well night time images show up on surveillance cameras.

“Our limitation is, what does it look like on the camera? Can you tell what color that person is wearing? We want to be able to provide as much information as we can in order to assist our police department in their investigations,” Montanez said.

For now, he doesn’t see that changing.

“We do realize that LED technology is an ever evolving technology, and we are constantly looking at different technologies, and the improvements. In fact, we’re in the process now of testing out different color temperatures to see what it will look like with our camera system.

“But keep in mind, I have to make sure that whatever we purchase will work with the system that we have,” he said.

Jon Hoyle, associate principal at The Lighting Practice in Center City, said he himself prefers 3000 lumens, which is a warmer light.

But back when the city was making these decisions, he said, “4000 was the warmest color you could get.”

And at that color range, he said, LEDs “mimic the quality of light you may have gotten from an old metal halide or even mercury vapor lamp, from way back in the day.”

Hoyle said there is “some merit” to research that shows blue light has a potential negative impact on the circadian rhythms of plants and animals as well as people, and 4000 Kelvins “is at the edge of where you might start to see problems.

“That tends to be the tipping point,” he explained. “If you go really any cooler, then you start to have problems with the blue light spectrum, not just for people but for animals too. But if you stay at 4000 and below, generally speaking, you’re  still in a safe range.”

Changing the color on the fixtures that the city is currently installing would be difficult, he said.

“You’d have to swap out the LED boards themselves, so it could be a fairly big deal,” he said.

“From a maintenance standpoint, there is a real benefit to having everything be more or less the same,” he said. “Replacing these lights is not quite as simple as unscrewing a lamp and screwing another one back in. You’re actually removing a circuit board from a fixture and putting in a new one,” he continued. “So when you start to mix color temperatures, you run the risk of inconsistency. If someone’s not reading a label, or if there’s not a label on the board, when they go to replace it you might wind up with one warm light in with a bunch of cool ones, or a stray cool one with a bunch of warm ones.