Chestnut Hill College and neighbors, at odds over the Sugarloaf Campus construction project, are seeking solutions for flooding and erosion problems at Wissahickon Creek. 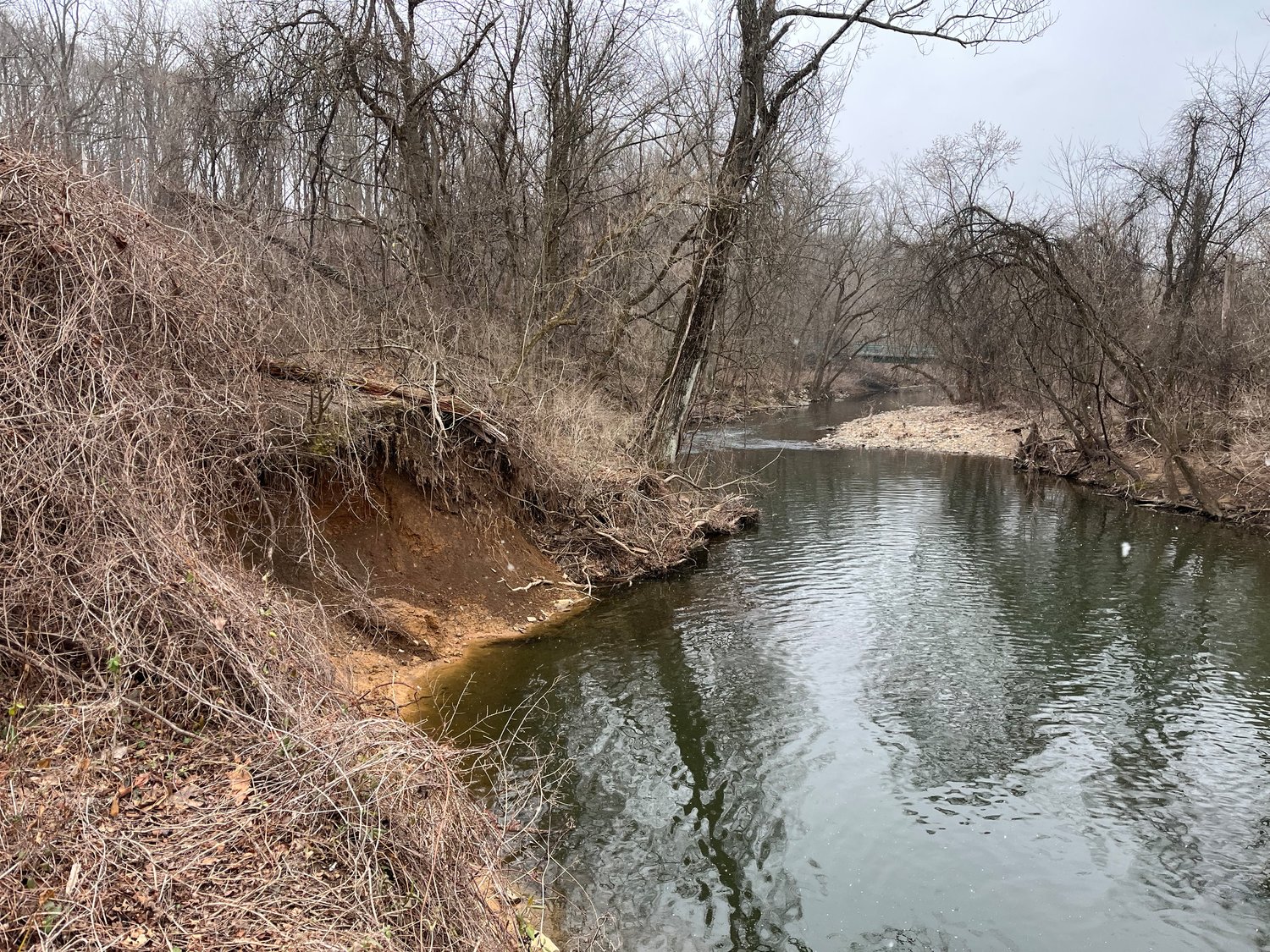 At the edge of the Wissahickon Creek, looking towards the Germantown Avenue Bridge. Heavy rains are eroding the creek banks, and wild grapevine, an invasive species, is choking native vegetation. Photo by Carla Robinson
Posted Wednesday, March 2, 2022 12:00 am
by Carla Robinson

At the request of nearby neighbors, Chestnut Hill College began cutting down an additional seven dead or dying trees that line the school’s property along the edge of Germantown Avenue last week, as part of its Sugarloaf campus construction project.

“The College hired Rockwell Associates to complete a full inventory of trees within striking distance to the trail and Germantown Avenue,” said CHC spokesperson Christopher Spangler. “The report contains a complete risk assessment and a health and longevity review and condition rating for each tree.”

Meanwhile, the same neighbors are looking into whether anything can be done to address flooding problems with the portion of the Wissahickon Creek that separates their properties from the college's main campus on the eastern side of Germantown Avenue - which they say is an important part of the project’s overall environmental impact.

In a press release issued last week, neighbors said they have hired Aterra Solutions to study flooding issues at the Wissahickon Creek, which wraps around the main campus,  flows underneath the Germantown Avenue bridge to the western side of the Avenue, and continues along the edge of Harper's Meadow, which is behind Northwestern Stables.

“We have done this in response to the periodic flooding that this area undergoes and greatly appreciate the cooperation we have had from many of the neighboring landowners for access to the stream,” the release stated. “We intend to generate a report and share it with the various riparian owners, such as the Friends of the Wissahickon, Chestnut Hill College, Morris Arboretum, the Wissahickon Valley Watershed and the Philadelphia Water Department.”

According to Spangler, college officials asked Morris Arboretum’s Urban Forestry Consultants division to meet onsite and walk through the property together with the neighbors’ consultant in order to produce their report, which can be found online at chc.edu/sugarloaf.

The report lists a total of 47 trees that will eventually need to come down along Germantown Avenue, which is the location of a new walking path along the edge of Sugarloaf campus. Of those, seven are in need of immediate removal due to safety concerns.

“This is not an aesthetic choice, it’s that the near neighbors had pointed out some concerns they had with these trees,” Spangler said. “The ones that are coming down are dangerous, they could fall onto Germantown Avenue.”

The trees and the canopy they provide are directly related to the flooding problems associated with the Wissahickon Creek, according to nearby neighbor George Thomas.

“When you start cutting the tree canopy, you open up the ground to sunlight, which triggers the growth of invasive species,” Thomas said. “That’s how we’re getting all this wild grapevine, which is pulling down trees all over the Wissahickon.”

It becomes a vicious cycle, Thomas said. The new vines grow up along the trees to eventually kill them and pull them down. The loss of each tree diminishes the canopy further, triggering the growth of yet more invasive vines. And on top of that, he said, the vine is very attractive to spotted lanternflies.

Adding to the problem is the flash flooding of the creek during heavy rains, which has caused significant erosion of the creek banks. This is threatening nearby oak trees, Thomas said, because oaks don’t like their roots in wet soil.

“There used to be tree cover all along the creek, which shaded the ground around it,” he said. “Now, about one-third of the creek’s edge is this invasive vine, which pulls down the trees and removes even more shade.”

Thomas said he’s glad the college is working with the neighbors, but mourns the loss of the trees that have already been cut.

“Once the trees are gone, they’re gone,” he said. “The tragedy is, if they’d left half the trees they’ve already taken down, they could have avoided what may turn out to be an environmental catastrophe.”

Meanwhile, Spangler said the college plans to hold another community meeting prior to the start of its next phase of demolition work.

“We’re in the process now of getting our final permits, and we are working together with the state Department of Environmental Protection and the neighbors who have hired their own experts,” Spangler said.  It will require a test blast, Spangler said, so they can get some readings in order to finalize the demolition plan.

“As soon as we have the data we need to make those decisions we’ll be having another community meeting,” Spangler said.