John Steinbeck, a native Californian, went to Stanford University hoping to find someone who'd teach him to write. He didn't. What he found, according to William Souder’s new biography of the … 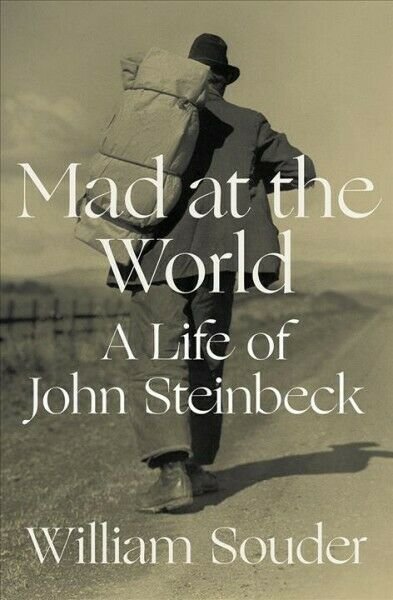 John Steinbeck, a native Californian, went to Stanford University hoping to find someone who'd teach him to write. He didn't. What he found, according to William Souder’s new biography of the writer, “Mad at the World,” was that the only formula for writing was "the aching urge to do it." That aching urge and his inborn anger met up to create more than a shelf full of books that have become American classics. Even a short list includes, "The Grapes of Wrath," "Of Mice and Men," "The Moon is Down," "Cannery Row," "East of Eden," "The Red Pony" and "To A God Unknown."

Some of his works were issued almost simultaneously as Broadway shows and novellas. Eighteen Steinbeck literary works have been adapted to the screen. He even wrote the film script for Alfred Hitchcock's "Lifeboat," but hated the movie so much he did not want that credit to be widely known.

He started writing as a teenager and dropped in and out of Stanford several times – with little written. While tending a cabin on Lake Tahoe for a while, in semi-seclusion, he made the commitment to writing.

As he started getting published and well-known, critics had a hard time knowing how to judge his work. Each book seemed to have a different setting or subject. Some accused him of dabbling rather than developing his themes. In time, however, Steinbeck became known as the champion of the oppressed, the loners, the misfits and the outsiders. He was not ashamed to present his characters with unblushing sympathy, made all the more compelling by his realistic and unsparing portraits of them.

One of the most enjoyable aspects of William Souder's biography lies in reading the stories behind the stories. Souder presents engaging summaries of each book and describes how Steinbeck worked on them, how they were received, and the torments and challenges of their compositions. This is all done with ease and grace and is incorporated into Steinbeck’s life as seamlessly as the stories of his three marriages, two sons, many dogs, raging, dysfunctional family life, and sweet and amusing details.

Here's a sample: Steinbeck and Joseph Campbell, author of "The Hero of a Thousand Faces,” both young men, became friends. Campbell fell hopelessly in love with Steinbeck’s wife, Carol. It didn't lead anywhere, but Campbell pined for her all his life. Another: One day a car pulled up to Steinbeck's house in the woods. Steinbeck opened his door to see Charlie Chaplin, there to announce his fandom of the author. Another Hollywood bit: Steinbeck's third (and final) wife was married to cowboy actor Randolph Scott when they met and fell in love. Another: the original title of one of his greatest works was, "Something That Happened." That became: "Of Mice and Men." A final surprise: A book whose working title was, "L'Affaire Lettuceberg" became "The Grapes of Wrath" at Carol Steinbeck's suggestion.

In 1936 The San Francisco News commissioned Steinbeck to go visit the camps where hundreds of thousands of Dust Bowl migrants had landed in California. Steinbeck wrote seven pieces for them that described his increasing heartbreak, anger and disgust with the treatment of the refugees. People were starving to death at famine levels. Steinbeck's sympathy and rage against the artificial manipulation of prices, and wages, perpetrated by the Farmers Association drove him to write an impassioned series. The News was reluctant to run the articles, but eventually did. Steinbeck was denounced as a radical and a communist. The police secretly advised him to travel the back roads. People of bad intent were looking for him. Luckily, he heeded their advice.

The Grapes of Wrath was published in 1939. It won the National Book Award and the Pulitzer Prize. It was cited prominently when Steinbeck was awarded the Nobel Prize for Literature in 1952.

Later in later, Steinbeck said that the greatest writer of his generation was Ernest Hemingway. When he was younger, he did not want to read Hemingway for two reasons. One, he feared being overawed by Hemingway's talent. Second, he dreaded that Hemingway's style would overly influence his own when he tried to write.

"Steinbeck," William Souder tells us in this wonderful biography, "believed the only way he would overcome his lack of talent was to be as honest on the page as he could be." This is a wonderful biography and is recommended with enthusiasm.