Chestnut Hill author Alfred O'Neill Jr.'s second novel in a trilogy, “Even Climate Change Can’t Stop Love and Murder,” is based on a true story. 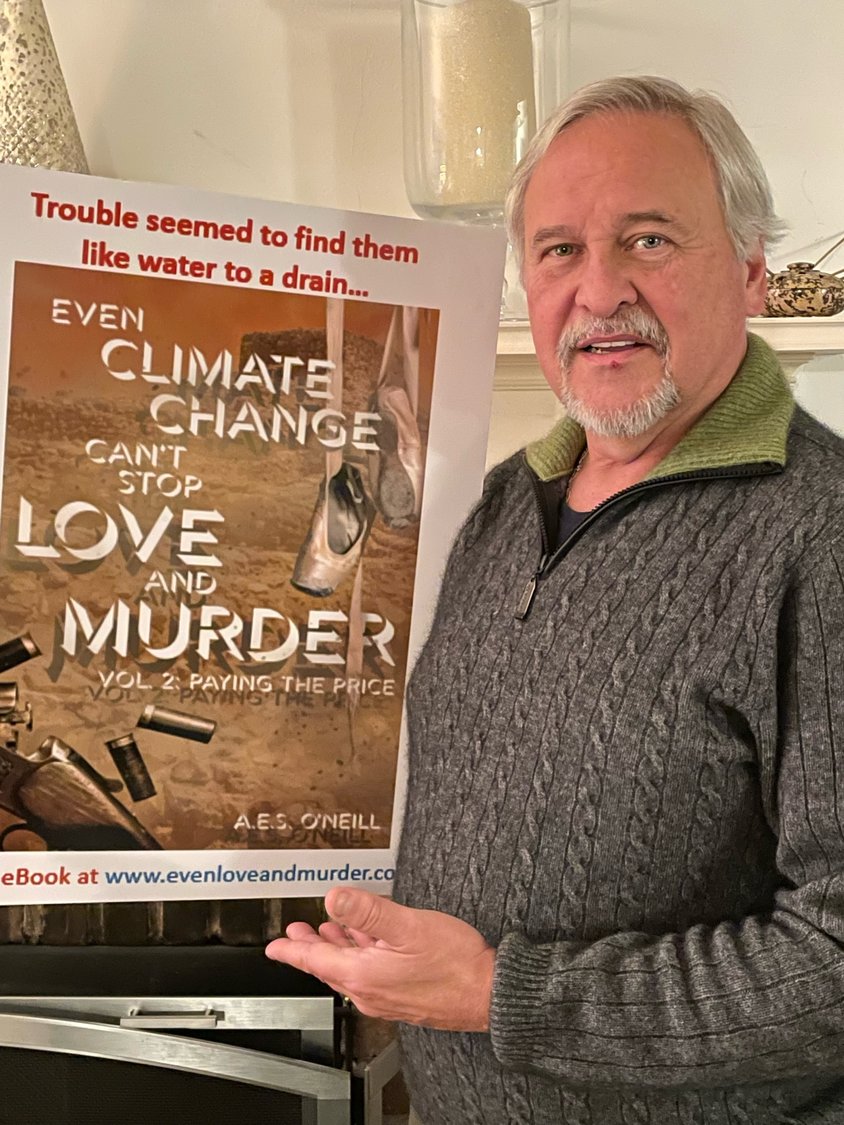 Chestnut Hill author Alfred O'Neill Jr. released a thrilling crime novel in October of last year, “Even a Pandemic Can’t Stop Love and Murder.” Based on a true story, the book — the first in a trilogy — is packed with shady characters, double-dealing and violence. So far, all eight reviews on Amazon.com have given it five stars.

And those who liked the first book haven’t had to wait long for the second novel in the trilogy, “Even Climate Change Can’t Stop Love and Murder,” another thriller about love and murder, trauma and healing. It was released Nov. 17.

“Torn from today's headlines,” you might say, since the story deals with climate chaos, insurrectionists and white supremacists. The protagonist, Alby, accompanied by his companion, Ginger, is relocated by government agents from New Jersey to Sedona, but a dark episode in Iraq has him permanently in hiding.

O’Neill, who grew up in Chestnut Hill and came back here to live 13 years ago, was an advertising agency executive for 30 years and is now semi-retired. What makes him different from other crime novelists is that he has first-hand familial knowledge of a life of crime. He has based much of his writing on his late father — also named Alfred O'Neill — who led a checkered life.

“My father was the ninth child in an Irish Catholic immigrant family from County Derry,” O'Neill said in a Zoom interview. He ran afoul of the law when he got involved with money laundering for "the mob." That led to a three-to-five-year stretch in Allenwood Federal Prison.

While there, the elder O’Neill’s roommate was John Phillips, the hugely successful songwriter and lead singer of the 1960s' soft rock quartet, The Mamas and the Papas.

Told to him by his father years ago, the plot of O'Neill's first book centers on a robbery at a mob-owned bank and the violent consequences that followed. From a childhood that he says was marked by wiretaps, mob dinners and FBI agents following his father, O’Neill said he learned at an early age to understand the complexities of love, crime and human behavior.

Typical of the first reviews for “Even Climate Change Can’t Stop Love and Murder” is this one by JJ Barnes, editor of The Table Read podcast: “Weaving such a human and real love story into a thriller was a perfect way to hook the audience… Highly recommended,”

For seven years O'Neill and his second wife, Nadine Caputo, had a blog, theoutspokentraveler.com. Nadine died of cancer on April 10, 2020, 11 years to the day that she and Alfred met along Forbidden Drive.

According to O'Neill, “After I lost my wife, I retreated to Woodstock, New York, for several weekends of solitary grieving; she was the inspiration for my wanting to finally craft a novel. But one summer night, all three books came to me, and I saw them as one ongoing series, like, 'The Thin Man' series.

“My father's ongoing inspiration is the life he exposed me to as the son of a low-level money launderer for the mob. His influence was opposed to the principled life of my Quaker education at Penn Charter, creating a duality of good and evil that I move through fluidly. Oh, the stories floating around in my head!”

O'Neill is currently developing another novel based on a true story. The working title is “Decay of The Angel,” It is a political and morality tale based on O'Neill's experience working as communications director for his uncle Joe Egan’s 1991 Philadelphia Mayoral campaign run. Egan had 14 weeks to replace Frank Rizzo after Rizzo's sudden death, but the campaign was doomed from the start. “Hopefully, that memoir will be out this time next year,” said O'Neill.

"Even Climate Change...” is available on Amazon and Good Reads. You can get “Even a Pandemic...” for free on www.evenloveandmurder.com. O'Neill will have a table at each Stag & Doe Wednesday night in the Chestnut Hill Business Association, 8514 Germantown Ave. Len Lear can be reached at lenlear@chestnuthilllocal.com