It was the 48th edition of the local grade school basketball tournament, and it gave the boys' team from host NFA the unique opportunity to win not just one, but two championships in a three-day span. 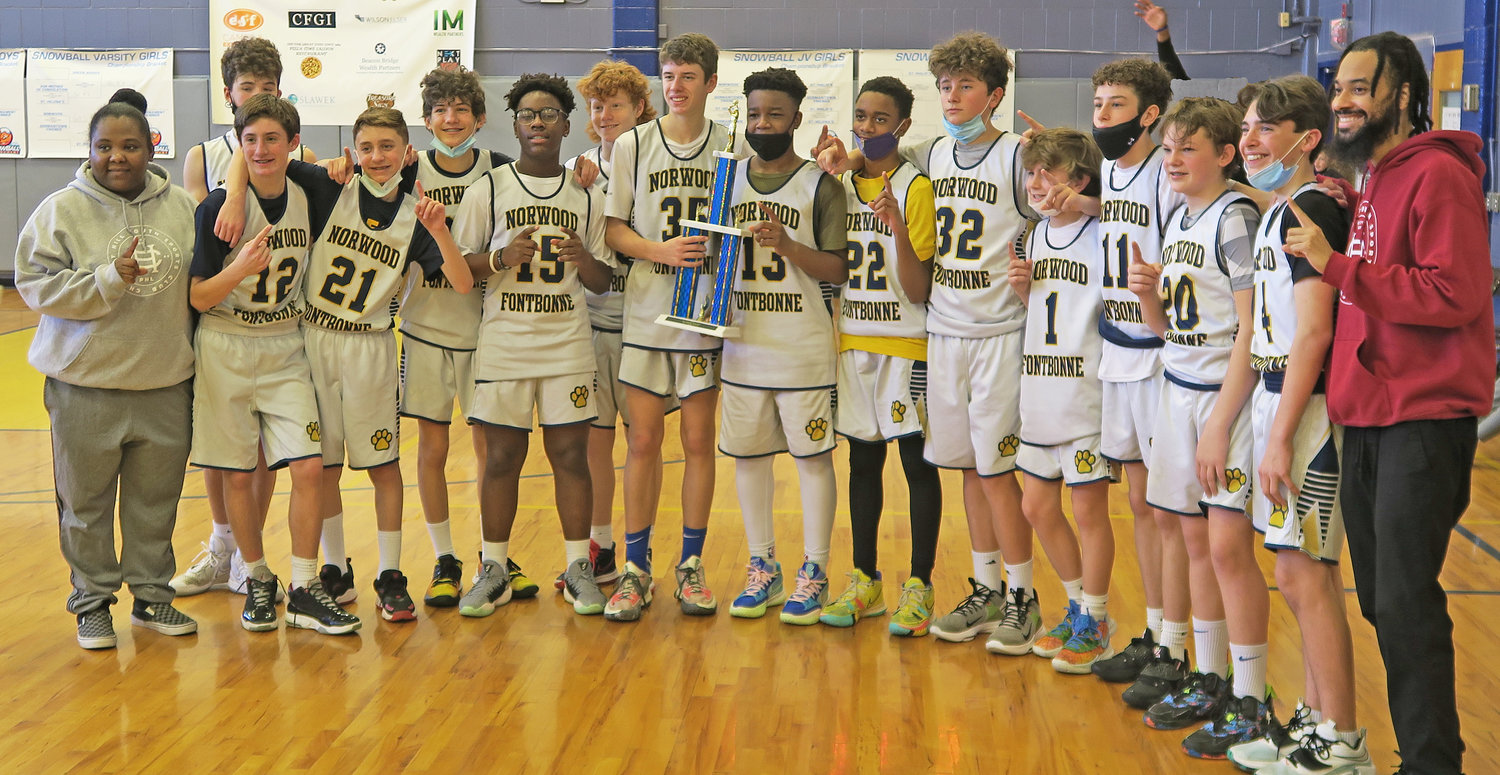 After a pandemic hiatus in 2021, Norwood Fontbonne Academy brought back its popular Snowball Tournament last weekend. It was the 48th edition of the local grade school basketball tournament, and it gave the boys' team from host NFA the unique opportunity to win not just one, but two championships in a three-day span.

The Bears had been due to appear in the finals of the Catholic Academies League, and Norwood and fellow finalist Waldron Mercy Academy were trying to put together a date when they'd meet to play for the championship.

It was decided to tack that game onto the front end of the Snowball schedule. For top-seeded Norwood, a 55-45 victory for the CAL crown on Friday started off a weekend that ended with the Bears' 67-49 win over St. Philip Neri School in Sunday's Snowball Tournament championship game.

In Friday's league final against Waldron, the Bears were down a point (15-16) to their guests from Merion Station after the opening quarter. By halftime, NFA had moved ahead, 31-26, and forward Brendan Flaherty already had 10 of his 12 total points on the stat sheet.

The Bears reinforced their lead and raised it into double digits by the three-quarter mark, when the count was 44-33. Waldron trimmed one point off its deficit in the fourth period, but the Bears still won comfortably as guard Matt Johnson ended up scoring seven of his 11 points in the second half.

A game in the girls' bracket followed this Friday afternoon contest, then the NFA boys went right back into action the same evening in their Snowball Tournament opener against Germantown Friends School.

The revival of the Snowball had been scheduled for early January this year (the traditional timeframe), but it was postponed until late February as numerous participating schools experienced COVID complications after the holidays.

As in past years, the 2022 Snowball tourney featured game announcers and the DJ work of former NFA parent Sandi Stabler. The highly popular food concession was also back, with an impressive menu presented by the superb moms of Norwood.

In the Friday night game featuring the Norwood lads, the Bears and the visiting GFS Tigers went neck-and-neck through the first quarter, the period ending in a 10-10 tie.

Flaherty asserted himself down under the basket in the second period, which opened with a 9-2 run by the host team. GFS jumpshooter Billy Henighan helped keep the Tigers from falling too far behind, and had nine points in the book at halftime. Norwood led 26-19 at the break, when Flaherty already had 18 points.

The Bears were up 37-28 at the three-quarter mark, and appeared to be cruising to victory. Germantown rallied during the first four minutes of the fourth quarter, though. Forwards Noah Hess and Chaisson Lachlan scored in the paint, and a put-back by Greg Levy capped a 7-0 run that got the Tigers within two points of the leaders, 37-35.

Flaherty drove for a lay-up and then Eagland scored off of a rebound to stabilize Norwood. A little later the Bears were leading 46-37, and they went on to win, 50-42, as Flaherty came away with a game-high 28 points. Eagland scored six points and Johnson had eight points for NFA. Henighan deposited 14 points and Hess put up 12 to lead Germantown Friends.

A brand new addition to the Snowball field of participants, Manayunk's Green Woods Charter School, is only in the third year of interscholastic basketball competition. They opened up Saturday morning's activities with a game against Flourtown's St. Genevieve School.

Green Woods was also involved in the next boys' game, but that wasn't played until almost the middle of the afternoon.

They got the jump on GFS in a 14-4 opening period, and were up 25-15 at the half as Sabri hit two field goals and shot six-for-six from the foul line. The Tigers roared back in a 16-5 third quarter and went on to win, 53-43. Hess deposited 13 of his game-high 18 points after halftime, which is when Henighan had 10 of his 13. Sabri and Michael Hillian emerged with 14 points apiece for Green Woods.

St. Philip, from Lafayette Hill, was given a first-round bye in the tournament, moving right into the semifinals on Saturday afternoon. St. Gen's had advanced to meet the Saints, but couldn't manage a field goal in the first quarter as SPN rocketed ahead 20-2. The Flourtown franchise played much better the rest of the way, but never recovered from its early shock.

As afternoon faded into evening, the semifinal bout between Norwood and St. Helena's attracted a large home crowd. The Bears took control early, as their big men, Flaherty and Lesovitz, combined for 19 points in the first quarter alone as NFA charged ahead, 23-8. The final was 63-34, as Flaherty and Lesovitz walked away with 20 and 18 points, respectively. Two three-point field goals were included in Brayden Erfle's game-high nine points in the losing cause.

Now, two nearby teams were slated to square off in the finals at high noon on Sunday. Norwood broke in front quickly, with a trey by Ethan Smith capping the Bears' 8-1 sprint out of the gate. St. Philip settled down after that, with a baseline drive and two free throws by Hayes helping them edge ahead of their hosts by the end of the quarter, 9-8.

The Bears had a strong start in the second period, as in the first. From the left corner, Etkin tossed in two three-pointers to help put NFA in command for the time being, 20-13.

It continued to be a game of runs, though. The score seesawed to 22-15, then in the last 36 seconds of the half SPN's Luke Simon and Hayes each struck from the three-point line. Norwood now led by just a single point at the break, 22-21.

St. Philip forged ahead with a "three" at the dawn of the third quarter, but a trio of Bears fueled an 8-0 surge that made it 30-24 in favor of Norwood. With under two minutes to go in round three there was still a six-point gap (now 34-28), then NFA jacked the lead up to 10 with a score from the paint by Lesovitz and a lay-up in transition by Johnson.

Next, the two ball clubs traded free throws to take the contest into the final quarter at 40-30.

As the fourth period began, SPN took two points off the Norwood lead in a little over a minute, with the score now 44-36. After this, a lay-up and free throw by Flaherty started the Bears off on a decisive 12-2 romp. Over the final five minutes of the game, Lesovitz would deposit 10 points, scoring two times off of rebounds from missed free throws by his teammates. The home team cruised to an 18-point win, claiming its second title in three days.

Scoring in double figures for the victors were Lesovitz (21 points), Flaherty (12), and Etkin (10). Rounding out the total were Johnson (eight points), Smith (six), Eagland (five), Khyan Billups (three), and Gavin Gravener (two). St. Philip received more than half of its total output from Hayes, who poured in a game-high 26 points.