After the COVID disruption of 2021 tourney, the event returned to the local school last weekend, but the defending champs from Collegeville, Pa. did not. 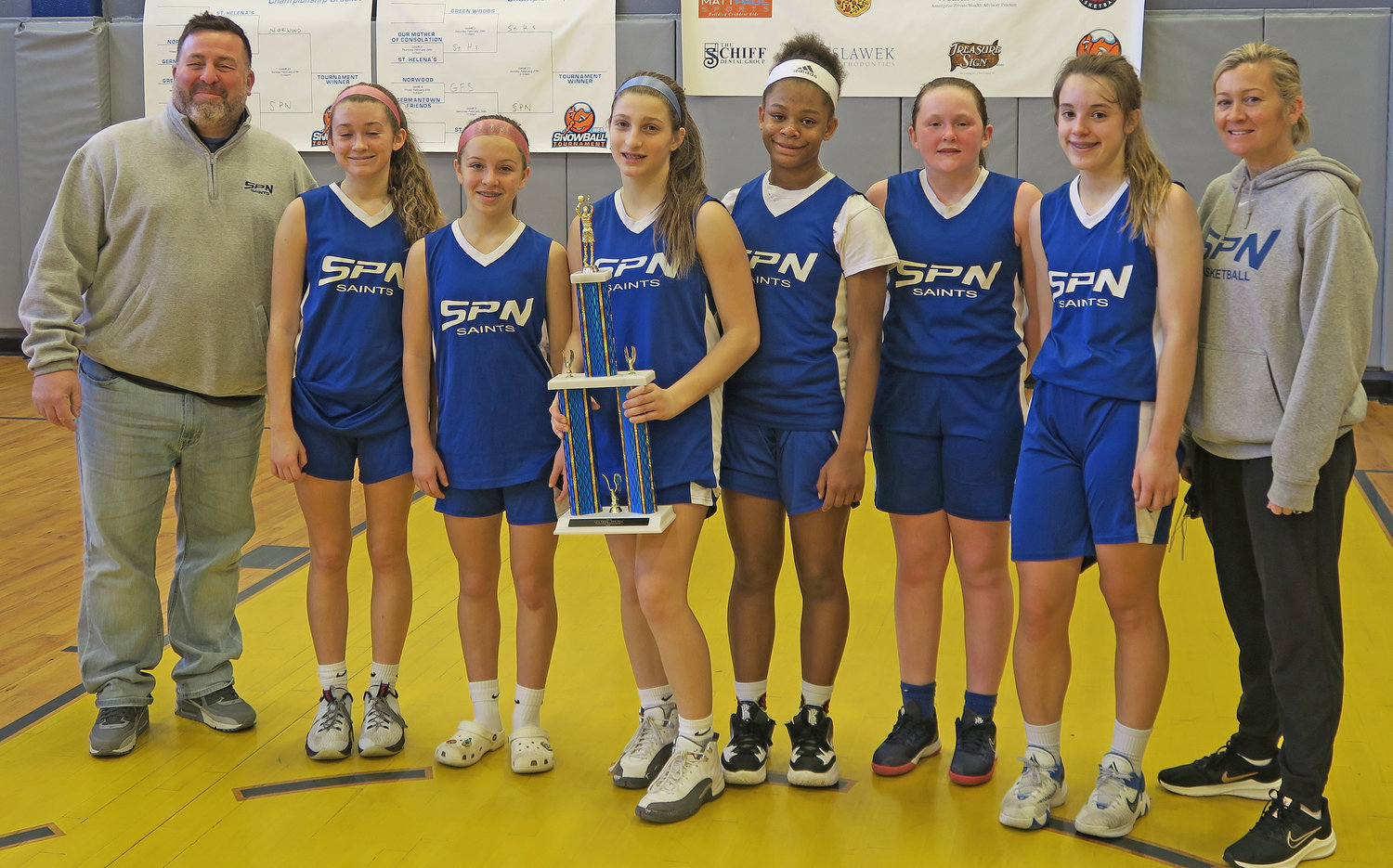 Norwood Fontbonne Academy’s Snowball Tournament was last held in 2020, when the girls’ championship was won by St. Eleanor School. After the COVID disruption of 2021 tourney, the event returned to the local school last weekend, but the defending champs from Collegeville, Pa. did not.

The 2022 title was claimed by a franchise much closer to NFA, St. Philip Neri School of Lafayette Hill.

With a total of just eight players on the roster and with only six turning up for most of their Snowball games, the Saints still overwhelmed the competition, winning Sunday’s championship game over St. Helena School of Blue Bell, 63-34.

Norwood’s own girls’ team split in two tournament games, first falling to Germantown Friends School, 33-20, on Friday, and then overcoming nearby Our Mother of Consolation (OMC) the following afternoon, 35-12. Germantown Friends lost 46-21 in a Saturday semifinal contest to St. Philip, which had received a first-round bye in the tournament.

The first varsity game to be played at the 2022 Snowball featured the local Our Mother of Consolation (OMC) franchise matching up against St. Helena's of Blue Bell on Thursday evening. St. Helena's is known for solid athletics overall, and the hoop squad rolled to a 42-8 victory.

The following evening there was a somewhat more competitive contest as the girls of Norwood swung into action against Germantown Friends School. It didn't seem that way at first as four points apiece from Sarah Goldberg and Jojo Lintulahti got GFS out to a 12-0 lead by the end of the first quarter. The second period was a 5-5 draw, with Alex Colleluori scoring the Bears' first free throw and first field goal of the evening.

The GFS Tigers added a little more to their lead in the third quarter, which ended at 27-11, then the Bears clawed three points back in the final frame for a 33-20 final. Lintulahti finished with six points and Emmie Day had seven for the victorious Tigers, while Colleluori posted a game-high 10 points for NFA and Charlie Schoen had four.

Germantown Friends advanced into the first of Saturday’s semifinal games, taking on a St. Philip Neri squad that was just beginning tournament play after receiving a bye for the first round.

SPN seventh-grader Mia DiBenedetto hit a lay-up and then scored twice off of steals to help the Saints sprint out to a 10-1 lead over GFS during the first five minutes. The Tigers weren’t able to get back in contention after that, trailing 21-7 at halftime and ultimately falling by 25 points (46-21).

The Norwood girls played their second tournament game on Saturday afternoon, facing OMC. The outcome here was pretty much a foregone conclusion after two field goals apiece from Colleluari and Riley Howard paced the Bears to a 12-2 advantage by the end of the first quarter. It was 21-4 at the half, and 35-12 at the final horn.

Colleluori came away with nine points, and Taylor Coleman scored all of her eight points in the second half, while Howard and Cara Gordon had six apiece. Leading OMC were Silvia Cosgrove, with six points, and Chloee Ravasco, with five.

In the second semifinal bout on Saturday, Green Woods Charter took on St.

Helena. Located in Manayunk, Green Woods has only had a basketball program for three years. A relatively unknown quantity, the team was slotted directly into the semifinal round.

The Manayunk ballclub kept up with St. Helena up to 6-6. St. Helena’s Tigers went on an 8-2 run to close out the first quarter, then really took control during a 12-3 second period.

Haley Elliot’s three-pointer at the buzzer at the end of the third round made it a 20-point game, 39-19, and the Tigers ultimately won, 52-19. Elizabeth Grabish booked a game-high 18 points and Kayleigh Rose deposited 11 points for the winners.

St. Philip's had only six girls turn up for the Snowball finals on Sunday morning, but their one sub proved to be enough against the six on the St. Helena bench.

Keira Whalen banked in a pair of field goals as part of an 8-0 opening run by the Saints.

St. Helena closed it up to 8-5 thanks to a lay-up and three-for-three foulshooting by Brenna Tronoski. DiBenedetto scored back-to-back transition lay-ups to slow down the Tigers, and she hit two more field goals later on. Whalen scored at the buzzer to put the Saints up 20-11 at the end of the first quarter.

St. Philip continued on to ring up another 20 points in the second period, while St. Helena garnered six. Hustling for offensive rebounds, the Saints often gave themselves four or five chances to score in a single possession. With three three-pointers, Cross already had 15 points by halftime, and DiBenedetto had 13. St. Helena’s Tronoski had seven points, but she did not score after the first quarter.

In the second half, it was mostly a question of St. Philip's maintaining the advantage it had earned in the first two quarters.

Cross wound up with a game-high 19 points and DiBenedetto accounted for 16, while Whalen had a dozen, Katie Shoup had five, and Sophia Nagle contributed two.

The Snowball organization, headed by John and Sharon Donovan, had brought back a beloved local tradition, upholding its reputation as one of the best grade school tournaments anywhere.