Gift for Father Mike Norwood-Fontbonne Academy students present Fr. Mike McCue with a basketful of produce from the Children’s Garden at their recent Opening School Mass. The fresh vegetables will … 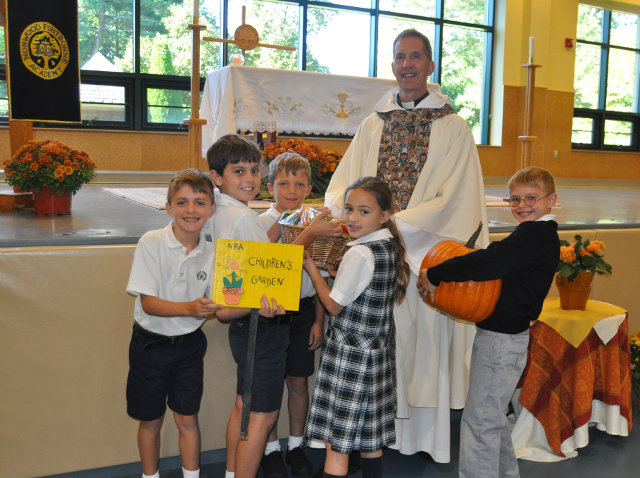 Gift for Father Mike Norwood-Fontbonne Academy students present Fr. Mike McCue with a basketful of produce from the Children’s Garden at their recent Opening School Mass. The fresh vegetables will be put to use at Fr. Mike’s soup kitchen in Camden, NJ. Pictured with Father Mike are (from left) Caleb Millan, Kevin Doerzbacher, Christopher Convey, Gretta Maguire, and Liam May. (Photo courtesy of Terri Hutsell)[/caption]

Celebrating its Catholic faith and its commitment to service, the Norwood-Fontbonne Academy (NFA) school community recently began its 93rd year with a special Mass.

Singing the hymn, “We Are Called,” the student body, staff, and invited guests welcomed celebrant and special friend, the Rev. Mike McCue, an Oblate of St. Francis de Sales. During Mass, a tribute was given to Father Mike for the 25th anniversary of his final vows. Following the Eucharist, Father Mike was presented with a basketful of fresh vegetables harvested from NFA’s Children’s Garden. The harvest is intended for the soup kitchen in Camden, NJ, where Father Mike directs a service ministry for the poor.

“The Academy’s liturgies and prayer celebrations are an important aspect of the faith life of our students and would not be possible without Father Mike’s support,” she said.