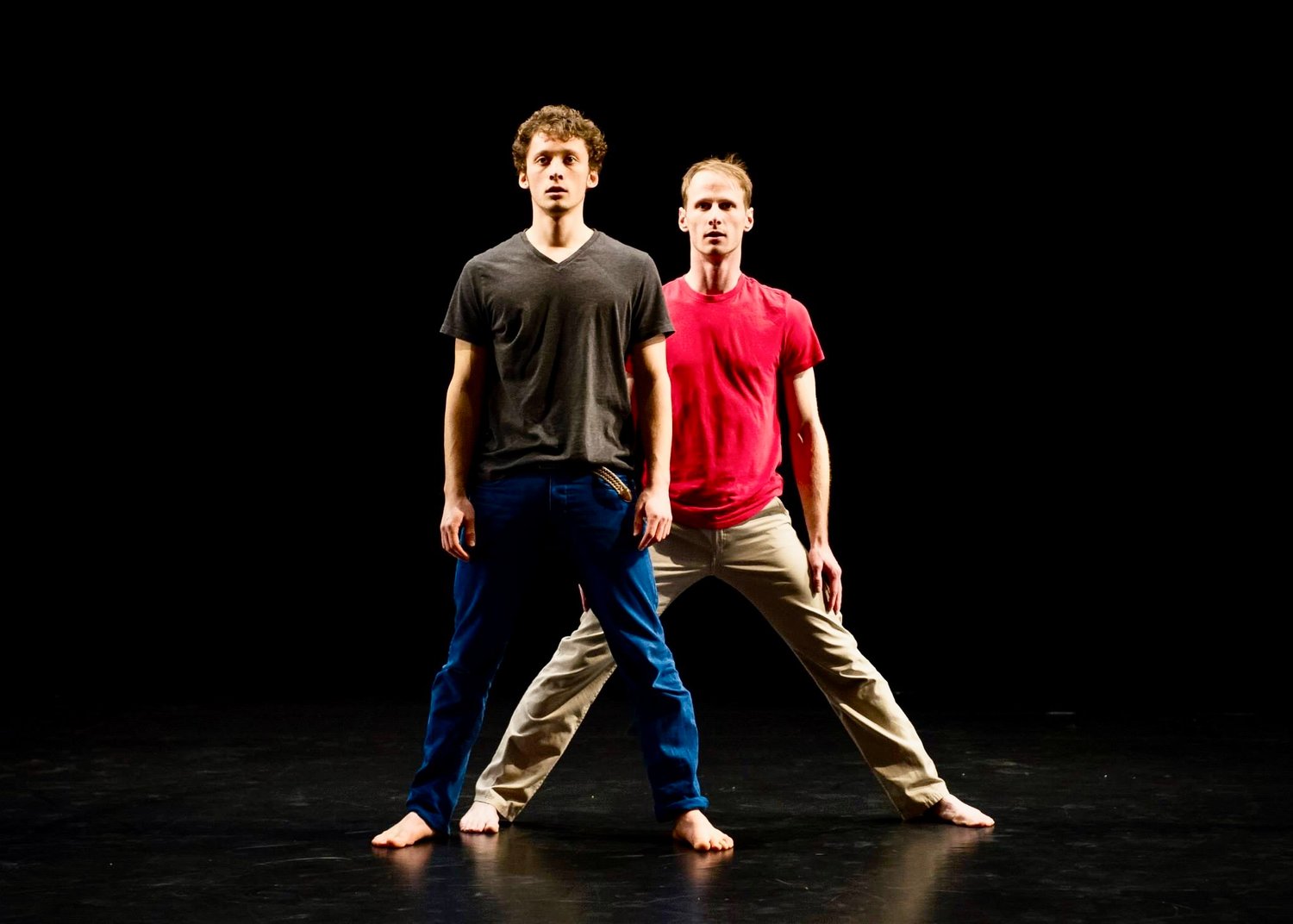 Ben Grinberg (left), of Mt. Airy, and Nick Gillette, of Germantown, are seen in a recent “Fresh Tracks” performance at New York Live Arts. Grinberg will be the lead performer in “Happy Hour” at the Miniball Festival. Photo by Ian Douglas.
Posted Thursday, March 31, 2022 6:00 am
by Len Lear

After making a splash at the 2021 Fringe Festival, Cannonball Festival, which features several performers from Northwest Philadelphia, is back with “Miniball.”

“As independent artists ourselves, we know how powerful even small commission and presentation opportunities can be and how hard they can be to find,” said Almanac Dance Circus Theatre (creator of “Miniball”) co-founder Ben Grinberg, long-time Mt. Airy resident. “Independent artists take an opportunity like this and return the energy to the community ten-fold.”

A performing artist, educator and arts administrator, Grinberg was a member of the first class of the Pig Iron School for Advanced Performance Training after graduating from the University of Pennsylvania 11 years ago. He also co-founded Almanac Dance Circus Theatre with his classmate, Nick Gillette, an acrobat and also a Mt. Airy resident.

Since 2014 Grinberg has created 12 full-length shows with Almanac, and many other shorter commissions and educational performances. The performing company has toured from Mexico to Scotland and through 14 states in the U.S. In addition, in 2020 they launched the first Cannonball Festival, which presented 28 shows and more than 150 performances at the Maas Building in South Kensington.

In the upcoming Miniball Festival, there will be multiple shows back-to-back each evening, and audience members can connect with the performers in between shows at the venue's outdoor beer garden. For example, Grinberg will be the lead artist in “Happy Hour” on Monday, April 4, 8 p.m., and Thursday, April 7, 6 p.m.

“Happy Hour” is a semi-improvised performance piece in which “an ensemble of acrobats, dancers and fools combine childlike curiosity, playfulness and wonder to challenge an adult world too full of unspoken rules and stubborn habits. 'Happy Hour' blends the edges of circus, dance and physical theater, creating authentic emotions and absurdity in equal measure.

“It asks the question, 'Can we be happy together for an hour?' … It is fun, a little absurd, patient and spacious and completely non-narrative, and it features really great music by Laura Lizcano, who has created a completely original score for the piece, and she will perform live.”

Another Mt. Airy resident, Nick Jonczak, in addition to being one of the main producers of the Miniball Festival, will be presenting an excerpt of a solo performance he is working on called “Chet.”

“Back in 2019 I presented some work during Almanac's work-in-progress event called 'Harvest' about my struggle to connect with my dad,” Jonczak said. “He and I don't really seem to like each other all that much, but for some reason we keep trying to build some kind of relationship, only to watch it peter out.”

Jonczak said he thinks Chet is the kind of guy his dad would like. "When I jokingly post photos to Instagram as this character doing chores in my backyard or around the house, I get a ton of folks flirting with me, some of whom might not realize this is a funny character I'm putting on and not the real me!

'Chet' builds on the work he first showed back in 2019,” Jonczak said.

“It’s the next step in me trying to figure out what exactly I'm trying to say about masculinity, patriarchy, hero worship, sex, compassion and caretaking,” he said.  (“Chet” will be performed Sun., April 3 at 5:30 p.m. and Wed. April 6 at 6 p.m.)

Kate Hanley, a Glenside resident for 15 years who works at Arcadia University, is another producer of Miniball. She has been involved with Almanac since 2018, when she stage-managed “XOXO Moongirl,” which won a Barrymore Award and was taken to the world-renowned Edinburgh Fringe Festival in 2019.

For Miniball, she is working with each show to ensure it has light, sound and projection cues. She will also be the onsite stage manager for every show.

“I'm so excited about this,” she said, “because it gives me a chance to go behind the scenes for each production and learn a little bit more about its creation. I also love watching how a show changes and grows even over the course of a few performances.”

Miniball events will take place indoors and outdoors. Tickets for all shows are $20 general admission. More information at almanac.ticketleap.com or cannonballfestival.org. Len Lear can be reached at lenlear@chestnuthilllocal.com