Old dog can learn a new (geometric) trick, after all

Captain, our 14-year-old Yorkie-poo, had been eating the same brand of kibble since he was a puppy.

Old dog can learn a new (geometric) trick, after all 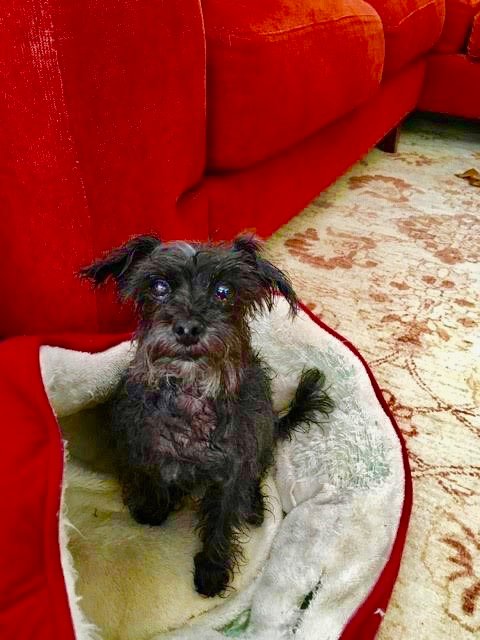 Captain is the captain of his own ship. He eats triangles of crunchy dog food but not circles.
Posted Friday, August 6, 2021 8:30 am
by Roz Warren

Captain, our 14-year-old Yorkie-poo, had been eating the same brand of kibble since he was a puppy. We bought it online in gigantic sacks that were considerably larger than Captain was himself. Captain, a small fluffy dog, weighs just five pounds. So each eight-pound bag of dog food lasted for many months.

Recently the company that makes Captain’s kibble went out of business. Suddenly his particular brand of chow was no longer available. We went online to try to buy up any that was still around,  but other small dog owners had beat us to it.

The supply we had on hand would only last a few months. What to do? After exhaustive research, we settled on a new brand of dog food and ordered it. When it arrived, we put a combination of new and old kibble in Captain’s dish. Would Captain notice? Would he care? Would he reject the new food?

What Captain did was decide that he preferred the new kibble. Very much so. In fact, it was so much tastier than the old stuff that he went through his dish, eating the new kibble and leaving the old.

He picked it up, piece by piece. If it was new kibble, he’d eat it. If was old kibble, it went back in the dish. How could we tell this was what he was doing? Easy. The old kibble is round. The new stuff is triangular.

Captain would start out with a dish of both round and triangular kibble. When he was done eating, all the triangles would be gone, and there would be nothing left in the dish but circles.

We still had several pounds of the old kibble left, and we didn’t want it to go to waste so we continued to mix the old in with the new, and our dog continued to gobble up the new stuff and shun the old.

What would happen if we didn’t replenish the new kibble? When he got hungry again, would he finally eat the older stuff?

Not a chance. When he’d eaten all the new kibble from his dish, he’d wander off to take a nap. But if he returned to his dish to find nothing but old kibble? He’d bark until we brought him some more of those tasty triangles.

So? Captain’s new hobby is sorting dog food. “We’re teaching our dog geometry!” I say to my friends. “Look! He knows the difference between circles and triangles.”

Although our Yorkie-poo has made his kibble preferences crystal clear, we continue to mix the old and the new. Because we hate to see good dog chow go to waste. And because we enjoy watching him sort. He doesn’t seem to mind the addition of this new challenge to mealtime. Maybe it’s a good thing. At the advanced age of 14, it’s helping keep him mentally stimulated!

Researchers have found that solving puzzles is good for the mental health of zoo animals, and they recommend that zoos make the search for food harder in order to make the lives of their charges more interesting.

Has this new pastime improved the quality of Captain’s life? I’d certainly like to think so. But as far as I can tell, the addition of kibble sorting into Captain’s day, which consists primarily of sleeping in his dog bed, sleeping in a patch of sun light, sitting in someone’s lap, being petted or going on walks, hasn’t made any difference to him at all.

I’m sure that he’s never once thought to himself “What’s with the triangles? Why haven’t they been giving me triangles all along? I wonder if I can convince them to give me squares and rhomboids too?”

He’s a dog. He’s living in the moment. He’s got no inner monologue. He’s probably not even consciously aware of the fact that there are now two different types of food on his plate that must be sorted and then abandoned or consumed.

But the fun we have watching him separate the circles from the triangles has definitely enhanced the quality of OUR lives. The one thing anyone lucky enough to have a Captain in their own life knows for sure? You never run out of new reasons to love your dog.

Roz Warren is a local non-practicing lawyer, former librarian and author whose slice-of-life essays have appeared in numerous newspapers and websites.