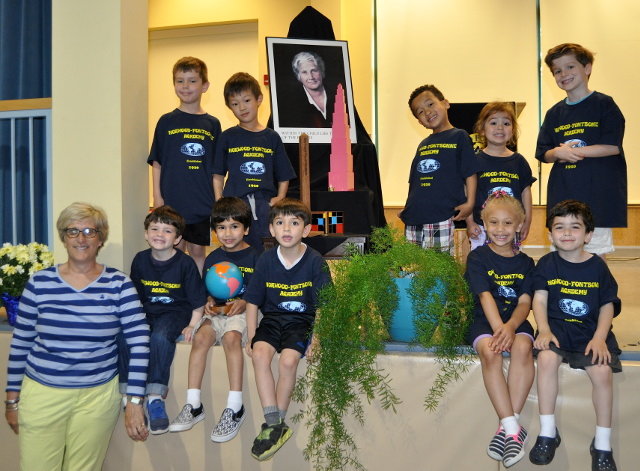 Norwood-Fontbonne Academy, a leader in early childhood education for 94 years, is proud to celebrate the 45th anniversary of its prestigious Montessori program.

The Montessori method was born in Italy, yet the United States continues to be the worldwide leader in the Montessori movement. In 1960, a newly trained Montessori teacher in New York City, Nancy McCormick Rambusch, founded the American Montessori Society which helps to establish and support Montessori schools and educators throughout the U.S.

Rambusch continued to raise awareness of the Montessori Method, a teaching philosophy founded by Maria Montessori that eschews that children learn best by working at something versus being told how to do it. Just nine years later, NFA (formerly Norwood Academy), a Catholic independent school sponsored by the Sisters of St. Joseph, brought Montessori education to Philadelphia.

A school wide celebration took place in late May where current NFA students, staff and families came together to remember the past, celebrate the present, and dream about the future.

NFA alumnus Jay Valinis, of Chestnut Hill, as a guest speaker, said his Montessori education influenced him at a young age, giving him direction in what he would eventually choose to do as an adult. Several students also shared their thoughts on what a Montessori education means to them.

“I was basically a very shy child when I first came to the Montessori classroom,” said seventh grader Gianna Branca, who has become an accomplished public speaker, attributing her growth to her Montessori roots.

Sr. Marjorie Lawless, SSJ, who has been teaching in NFA’s junior level Montessori classroom for 25 years, said: “We remember and pray in thanksgiving for the opportunity that was given to NFA to begin a Montessori program during its early stages of growth in the United States.”

The celebration began and ended with prayer and a special Peace song familiar in Montessori circles around the world.