Although restrictions due to the COVID-19 corona virus continue to prohibit classical music lovers from hearing their favorite musicians performing “live” for in-person concerts, … 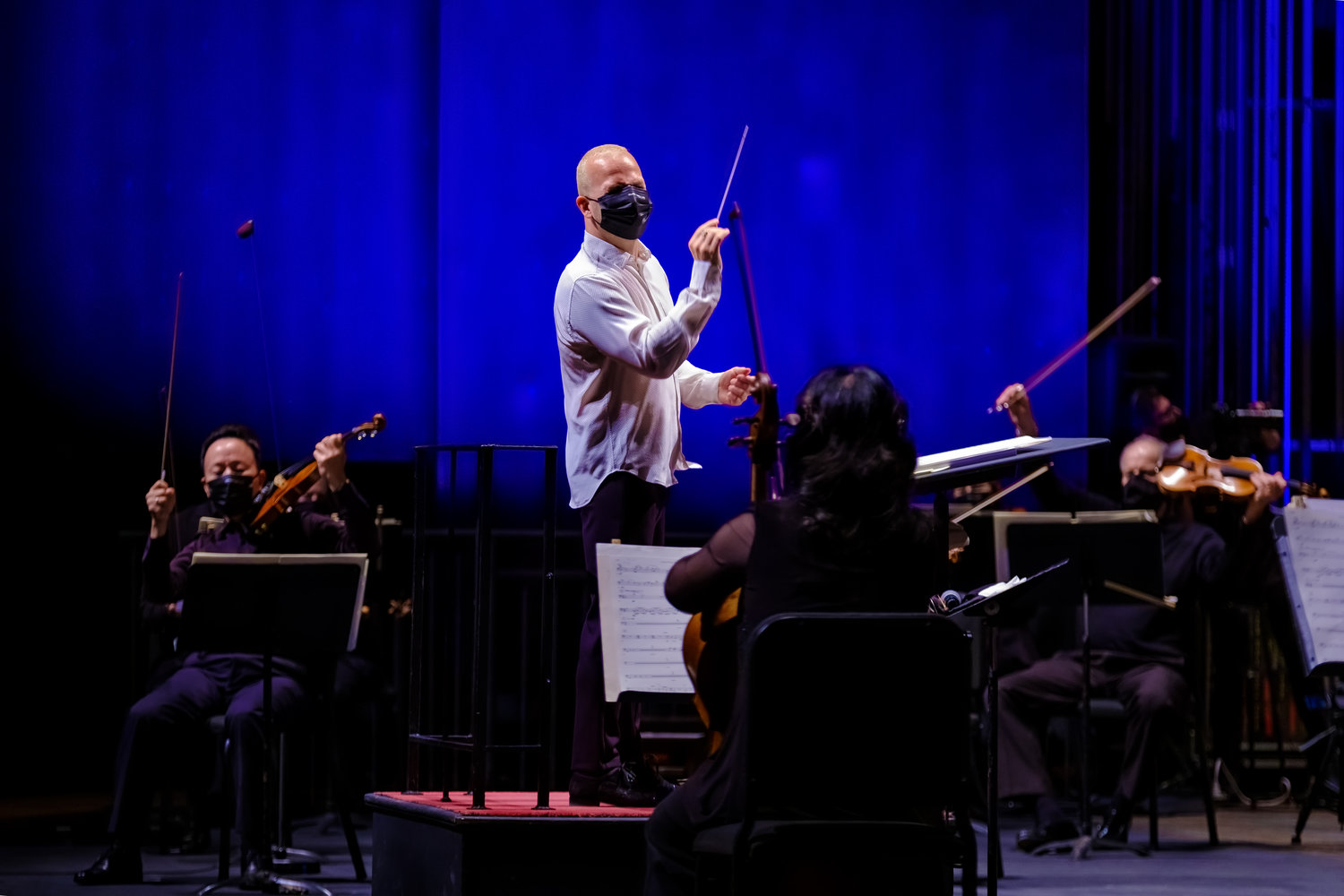 Yannick Nezet-Seguin conducts the Philadelphia Orchestra on the stage of the Mann Center for the Performing Arts.
Jeff Fusco
Posted Wednesday, October 7, 2020 1:34 pm
by Michael Caruso

Although restrictions due to the COVID-19 corona virus continue to prohibit classical music lovers from hearing their favorite musicians performing “live” for in-person concerts, ensembles with imagination have changed their formats to satisfy our desperate need for music.

The Philadelphia Orchestra opened its 2020-21 season Wednesday evening, Sept. 30, with a “virtual” concert originally performed on the stage of the Mann Center for the Performing Arts in Fairmount Park. Although I’ve been teaching “virtual” piano lessons online for Settlement Music School since mid-March, this was my first experience “live streaming” a classical music concert.

I admit it – I approached the event with mild trepidation. I shouldn’t have. Even though the “Fabulous Philadelphians” play a repertoire that is mostly – but not all – steeped in tradition, under the artistic guidance of the youthful Yannick Nezet-Seguin, the Orchestra has made every attempt to embrace the brave new world of digital technology.

The updated program for Wednesday’s concert opened with a short clip of one of the most iconic performances ever given by a born-and-bred Philadelphian: Marian Anderson’s rendition of “My country ‘tis of Thee” on the steps of the Lincoln Memorial in Washington, D.C. The performance took place on Easter Sunday, April 9, 1939. The great African American mezzo had been barred from singing in Constitution Hall by its owner, the Daughters of the American Revolution, not because her voice wasn’t up their standards but simply because she was Black.

Not to be undone by such rank bigotry, First Lady Eleanor Roosevelt saved the day by providing Anderson with an even grander forum for her musical artistry and personal integrity – the federal edifice built to honor the memory of Abraham Lincoln, the slain president who transformed the War Between the States to save the Union into a Civil War to free its slaves. Fortunately, Anderson’s performance of what might have been our national anthem was recorded. It remains as powerful and necessary today as it was more than eight decades ago.

In a marvelous trick spanning the past 81 years, soprano Angel Blue, Nezet-Seguin and the Orchestra joined the historic recording and then took over with a simple, moving interpretation of the patriotic anthem. Blue was heard later in the program in an excerpt from Verdi’s “Il Trouvatore.” Her voice soared above Nezet-Seguin’s expert accompaniment – which, incidentally, made the composer’s primitive orchestration sound more colorful than it actually is. The Orchestra’s most recent performance of this very aria was heard in 1983 at the Mann Center with the incomparable Leontyne Price as the soloist.

Keeping within the operatic mode, earlier in the program Nezet-Seguin led the Philadelphians in an energetic reading of the Overture to Rossini’s “The Thieving Magpie.” The woodwinds chirped sweetly and the brass intoned with eloquent timbres and precise rhythms while the strings glistened with a silken sheen. And, of course, the percussion battery bristled with martial glitter.

The concert’s major score was Mozart’s Symphony No. 29 in A major, K. 201. The maestro and his players gave this first of the composer’s truly great symphonies a reading that some might consider too expansive and refined for purists of the historical performance school. I, on the other hand, who grew up hearing and loving the Mozart of both Eugene Ormandy and George Szell, found it beguiling and memorable. Textures were clear, counterpoint was bracing, phrases were nobly shaped, and ensemble was nearly immaculate from start to finish. Even more impressive was the natural resonance the Mann Center’s stage provided – the acoustical bloom around the playing was splendid.

But my favorite moment came at the hands of a single musician. Philadelphia-trained pianist Lang Lang was to have been the gala evening’s soloist, but the coronavirus has kept him in his native China. All the same, from halfway around the globe, the keyboard superstar offered his best wishes to what he called his favorite American orchestra and his second hometown. He played the 30th (and final) Variation of J.S. Bach’s monumental “Goldberg” Variations with a tone that glowed like a golden halo and a lyrical touch that gently molded the four-part harmony of the keyboard writing and made it sing like a smoothly blended yet expertly highlighted vocal quartet.

You can reach NOTEWORTHY at Michael-caruso@comcast.net. To read more of NOTEWORTHY visit www.chestnuthilllocal.com.