Paul Farber, 38, was born and raised in Mt. Airy and currently lives around the corner from his childhood home. He graduated from both Germantown Friends School and The University of Pennsylvania, … 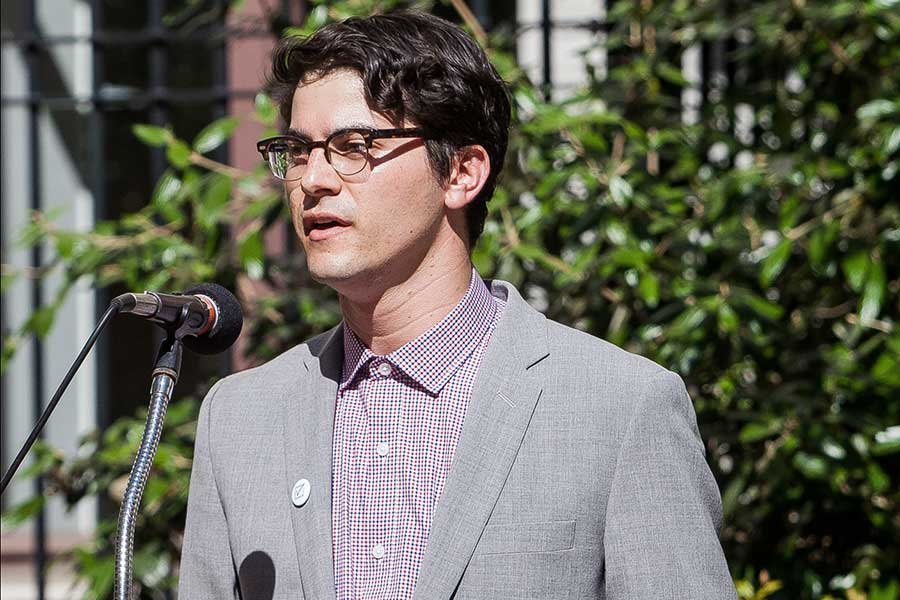 Paul Farber, who was born and raised in Mt. Airy and still lives there, is the co-founder of Monument Lab, which was just awarded a $4 million, three-year grant from the Andrew W. Mellon Foundation.
Posted Friday, November 13, 2020 10:25 am
by Len Lear

Paul Farber, 38, was born and raised in Mt. Airy and currently lives around the corner from his childhood home. He graduated from both Germantown Friends School and The University of Pennsylvania, majoring in urban studies, and he worked as a research assistant to renowned scholar/author Michael Eric Dyson.

In 2012 Farber and a friend, Ken Lum, co-founded Monument Lab, whose purpose, according to Farber, is “to critically engage the monuments we’ve inherited and to unearth the next generation of monuments — to imagine public spaces through stories of social justice and equity. We want to acknowledge the contributions and the work of people who don’t always get recognized.”

It should be a lot easier now for Farber to achieve that goal. In early October his organization was awarded a $4 million, three-year grant from the Andrew W. Mellon Foundation.  The grant was the first from the foundation’s new $250 million “Monuments Project,” which aims “to transform the way the country’s histories are told in public spaces by funding new monuments.”

“We are proud to launch our new Monuments Project with our first partner, Monument Lab, and to support their work to more deeply learn and vibrantly reimagine our public spaces to better reflect the rich multiplicity of American stories,” said Elizabeth Alexander, Mellon Foundation President.

“It's a great honor to be the first to receive this grant,” Farber told us last week, “and it's exciting to imagine future projects across the U.S.” Farber, who has a doctorate degree in American Culture from the University of Michigan, is the author of two books, “A Wall of Our Own: An American History of the Berlin Wall” and “Monument Lab: Creative Speculations for Philadelphia,” a public art and history handbook designed to generate new critical ways of thinking about and building monuments. Farber is also a senior research scholar in fine arts at the University of Pennsylvania's Weitzman School of Design, where he teaches urban studies.

When asked about the controversy surrounding the removal of monuments to Frank Rizzo, Christopher Columbus and Confederate generals around the country, Farber replied, “We should see these figures in their historical context. We have to re-think who we elevate and who we don't. There are lessons being learned every day. We have to come together in new ways and give a new look at injustices, past and present.”

The $4 million grant from the Mellon Foundation will focus on three key components: A national audit of existing monuments that will assess the current monument landscape across the U.S. and draw on existing data on monuments from national, state, municipal and public sources.

Lastly, the grant will support the growth of a full-time staff for Monument Lab and support the organization’s capacity to strengthen their role as national leaders in the movement.

In 2015, Farber, Lum and other scholars and artists staged a month-long exhibition at City Hall that asked Philadelphians what was an appropriate monument for the city of Philadelphia? “We started out in the courtyard of City Hall,” Farber said. “We communicated with a variety of people who walked through, from artists to bus drivers, children to seniors citizens, people of all types. We had conversations about public art and what it could and should be.

“From there, it grew legs and went from being academic to real-world when we teamed up with the Mural Arts program. In the end, we worked with over 20 artists and over 10 sites for new monuments. We worked with students and artists and spoke to over 250,000 people, face to face. That’s the equivalent of one in seven Philadelphians, and those engagements are represented in the book 'Monument Lab.' We’re now expanding what we’ve done to other cities.”

Farber has always been ahead of the curve. In his sophomore year at Penn, Farber was the co-founder of a group called PATH (Penn Athletes and Allies Tackling Homophobia), which was the first gay and allied campus sports group in the country.

For more information, visit monumentlab.com. Len Lear can be reached at lenlear@chestnuthilllocal.com