Theroux's observations about travel and literature are well made and worth mentioning, but the book's appeal lies with its people.

A Sweet Piece of Road Candy: 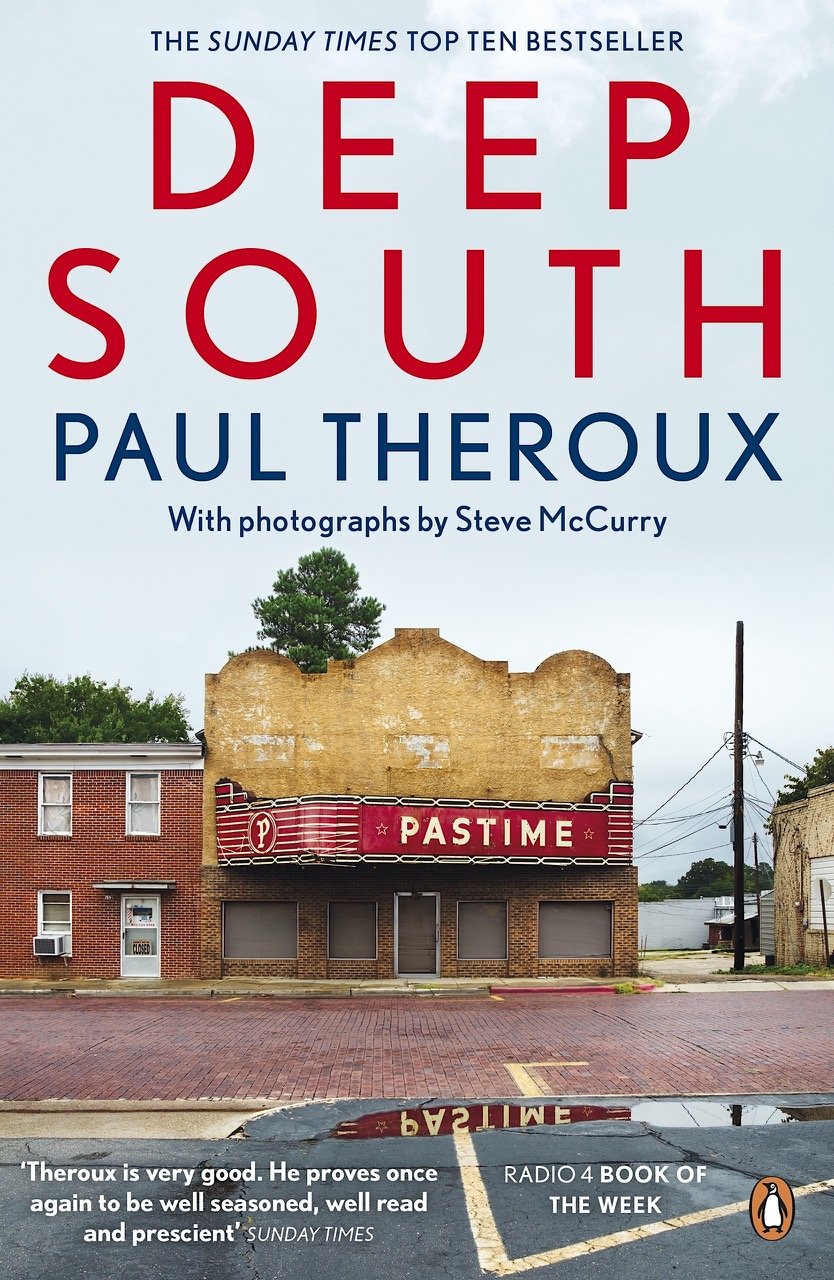 Paul Theroux's 51st book, after a career spent describing his travels through, and in, some of the world's most foreign places, was his first book about America. "I was in the Deep South," he says, 'because I hardly knew it, and for the sheer pleasure of driving my own car, for the freedom of not having to make onward plans, because only in America can you travel in confidence without a destination."

Having come to loathe modern air and rail travel because of the police-state oppression it made him feel, he set out from his home on Cape Cod to see what he could see "in the Low country, the Black Belt, the Delta, the backwoods, the flyspeck towns." The air he breathed, the light and shadows he saw, the food he ate and the people he talked to form the heart of his narrative. Most especially the people – of every color, size, shape, level of education and range of philosophy one can imagine: farmers, store keepers, gun show dealers, preachers, barber shop denizens, teachers, social workers, writers and just plain old layabouts who were willing to talk to a stranger from the North. (Once he went to a Southern Literature conference where he introduced himself as a visiting writer and his hostess kept referring to him as "Mr. Thorax." He stayed humble and amused by the mistake.)

Theroux made his journey in four installments that roughly correlated with the seasons, traveling for a few months at a time and then returning home to write and reflect for a while about what he'd seen and heard.

"Most travel narratives," he writes, "describe the miseries and splendors of going from one remote place to another."

They make the difficulty of the road be the story, not the arrival.

"But traveling in America is unlike traveling anywhere else on earth."

He illustrates that point with one of his first stops at a small convenience store in a small Alabama town. Made of weathered boards, a rusted Coca-Cola sign nailed to the wall, the store had "a homely enduring look,' and had to be "run by someone who'd talk." Theroux saw a countertop covered with jars of candy and said to the man, "We used to call that penny candy."

"Road Candy," said the man, "Eat it while you're driving."

And that became part of the theme for the rest of Theroux's drive, a perfect summing up of the pleasures of driving through the Deep South. "What I saw, what I experienced, the freedom of the trip, the people I met, the things I learned: my days were filled with road candy."

Sweet as that sounds, Theroux was not afraid to ask the so-called hard questions as he traveled along: race, the past, guns and religion. And riding over it all: poverty. Deep, ground-in poverty. People answered politely for the most part, but honestly too. A constant source of bitter irony colors Theroux's perceptions. He had traveled much of his life through Third World countries where millions of dollars of United States humanitarian aid were spent on development. Yet, people in our own country suffer conditions as severe as those abroad with but a pittance offered to remedy their own medical and economic emergencies.

One of the most thought-provoking chapters of "Driving South" is an extended essay called "Fantastications of Southern Fiction." Home from one of his trips, Theroux dipped into Southern Fiction hoping for further insight into the interior lives of Southerners. What he found, by and large, seemed like a clown show. And yes, that includes the likes of Faulkner, Caldwell, and Harper Lee. He accuses them of creating a white populace straight out of the cartoonist Al Capp's "Dogpatch" – freakish, outlandish, darkly comic and bizarre people. Their grotesqueries barely touch on "the day-to-day injustices of the 1920s and '30s ... Plenty of dwarfs, hunchbacks, albinos, night hags, and deviants, the usual 'Southern Gothic,' "but little mention of forced labor, racial violence, extreme segregation, and the lynching of Blacks."

Interestingly, Theroux says, ``The South's Black writers, by contrast, have no need to resort to fantastication: The truth behind their fiction is so bizarre that the grotesque comes firsthand, ready-made.”

Theroux's observations about travel and literature are well made and worth mentioning, but the book's appeal lies with its people. Theroux himself seems like an eccentric, occasionally cranky uncle who's just come back from places you've probably never seen, and certainly have never seen in the way he did. The book is worth reading while sitting on the porch in the twilight.

(On a personal note: The author's literary references sent me on a month's long, quite exhilarating reading journey through books by the white Southern writers Barry Hannah (four of them), William March, Charles Portis (6), and Eudora Welty. That was followed by re-reading such Southern Black writers Zora Neal Hurston, Ralph Ellison, Richard Wright, Ernest Gaines and Alice Walker with Theroux's comments in mind. Quite a reading adventure it was.)