When they met on the basketball court last Tuesday for the first game of 2023 and the resumption of the Inter-Ac League campaign, both Penn Charter and Episcopal Academy owned overall records under .500. 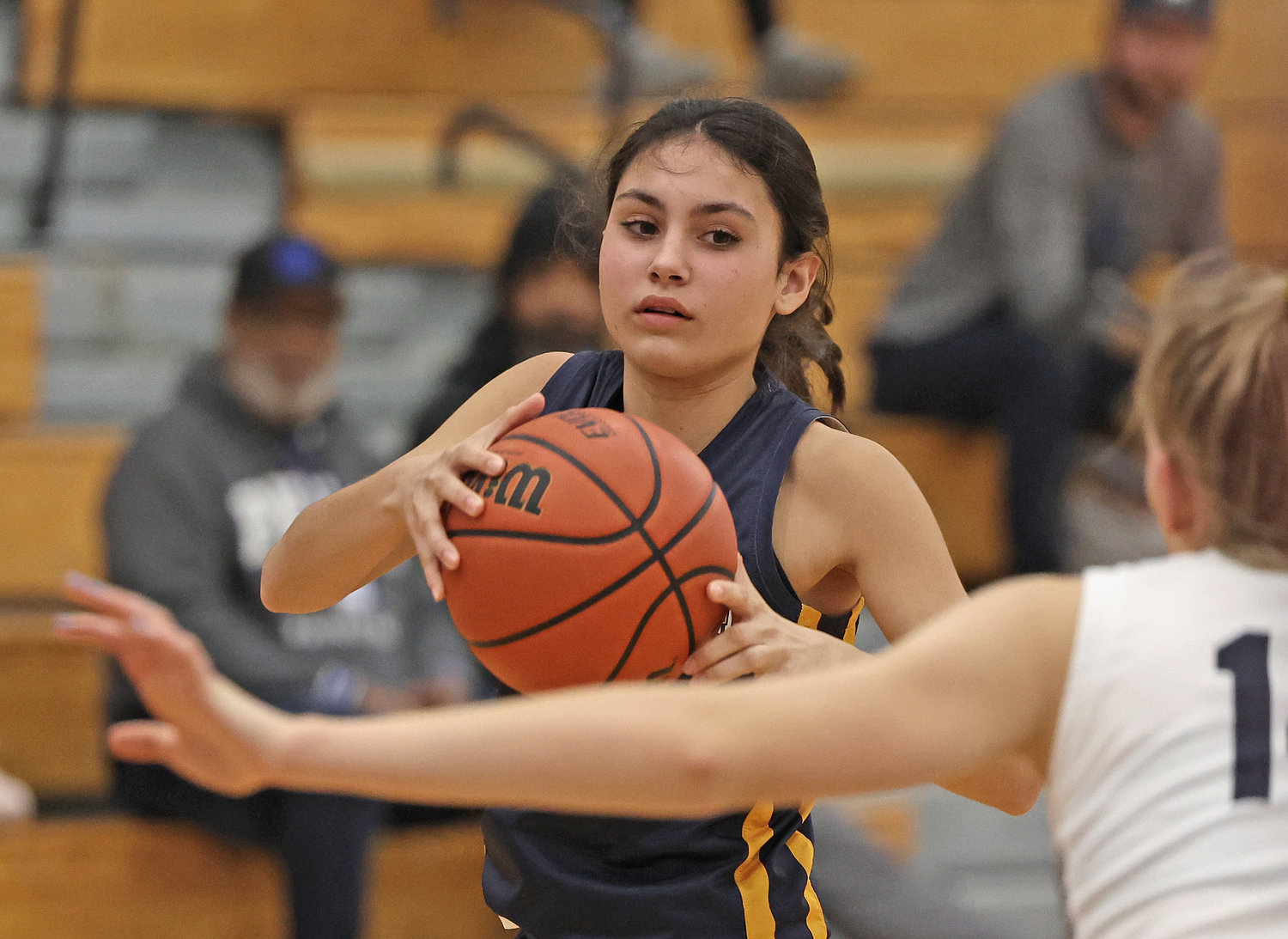 Penn Charter freshman Natalia Modzelewski looks to make a pass inside from out on the right wing.
Photo by Tom Utescher 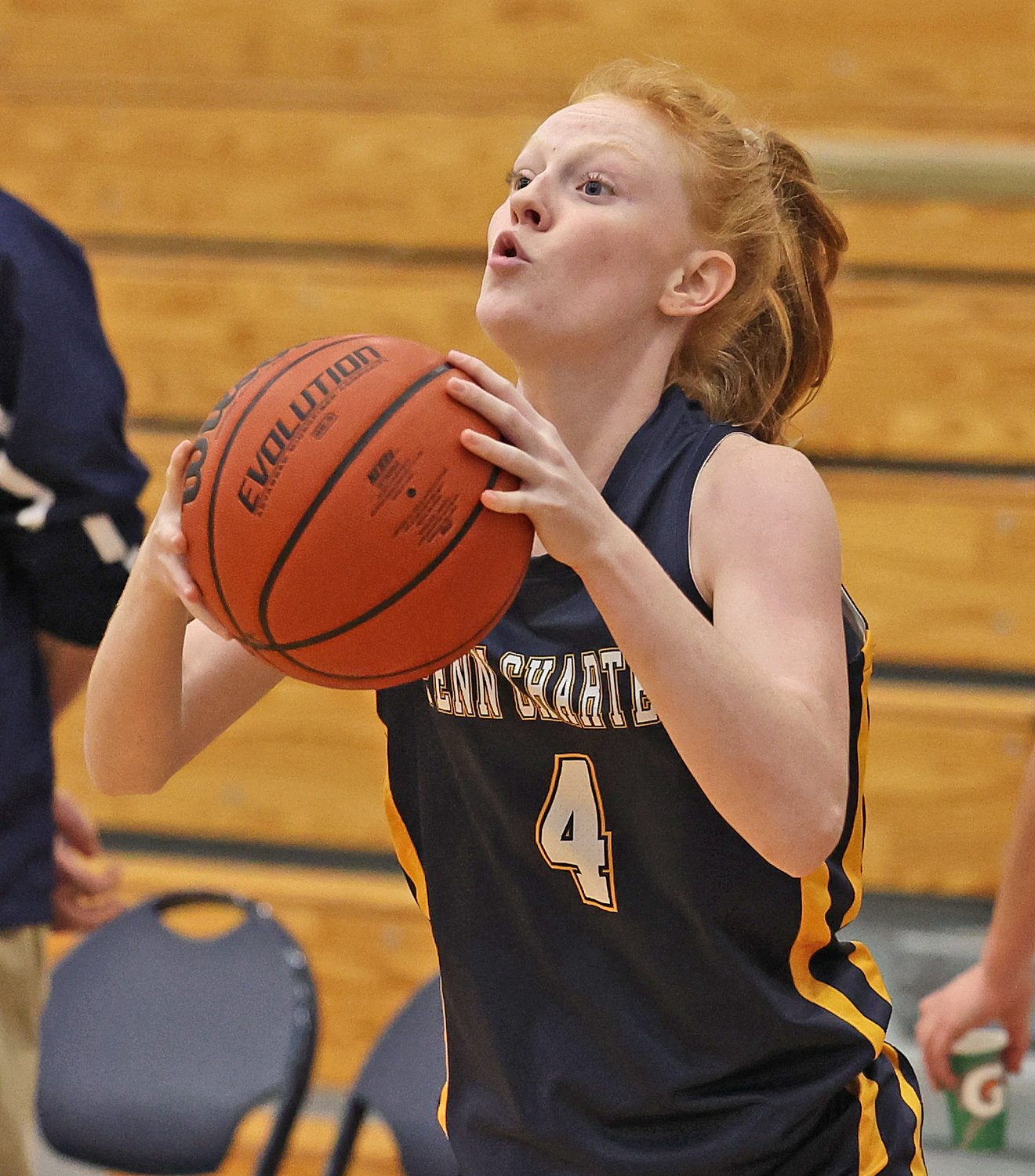 Molly Dougherty, a Quakers freshman, eyes up the basket for a jump shot.
Photo by Tom Utescher
Previous Next
Posted Thursday, January 12, 2023 12:00 am
by Tom Utescher

When they met on the basketball court last Tuesday for the first game of 2023 and the resumption of the Inter-Ac League campaign, both visiting Penn Charter and host Episcopal Academy owned overall records under the .500 mark.

There the similarities between the teams ended. While Episcopal, at 0-8, had played mostly within the Philadelphia region, defending league champ Penn Charter (4-6) had ventured out of state a number of times to face some nationally-prominent teams. Penn Charter had gone 2-0 in the league in the old year, defeating Germantown Academy and Springside Chestnut Hill, while EA had lost its opener against the Academy of Notre Dame.

Last Tuesday in Newtown Square, after a 2-2 tie at the outset Penn Charter scored the next seven points and was ahead 19-5 by the end of the first quarter. The Quakers continued on to win 63-38, as guard Aleah Snead chalked up a game-high 22 points and her senior classmate, forward Bella Toomey, added a dozen.

Toomey and EA's tallest player, senior Gaelie Keffer-Scharpf, traded lay-ups at the outset. Snead netted a three-pointer from near the top of the key, Toomey deposited a transition lay-up, and Snead then stole the ball back and scored on the break. Episcopal called time-out with 4:17 still remaining in the first quarter, trailing 9-2.

When play resumed the Churchwomen got one point back from the foul line, but PC eighth-grader Ryan Carter and sophomore Kaylinn Bethea combined for six straight Penn Charter points to make it 15-3. The score seesawed to 17-5, and in the final seconds of the opening period, freshman Liv Vieira fed Snead on the run for a score in transition. Charter held a 19-5 advantage going into the second quarter.

By the end of that next period, Charter had gotten almost all of its young reserve players into the game. After the scoreboard reached 30-13 for halftime and 48-23 at the three-quarter mark, the Quakers' lead peaked at 60-27 midway through the final frame before the Churchwomen made up some ground near the end.

Going down the PC stat sheet past Snead and Toomey, the scoring for the visitors was spread around. Bethea and Vieira had six and five points, respectively, Carter, senior Gracie Shoup and freshman Molly Dougherty scored four apiece, and the Quakers got three points each from sophomore Kendall Small and freshman Natalia Modzelewski.