In Saturday's PAIS championship game at La Salle University, it was the Quakers who put up much more of a fight than many anticipated against the top seed for the tourney, Westtown School. 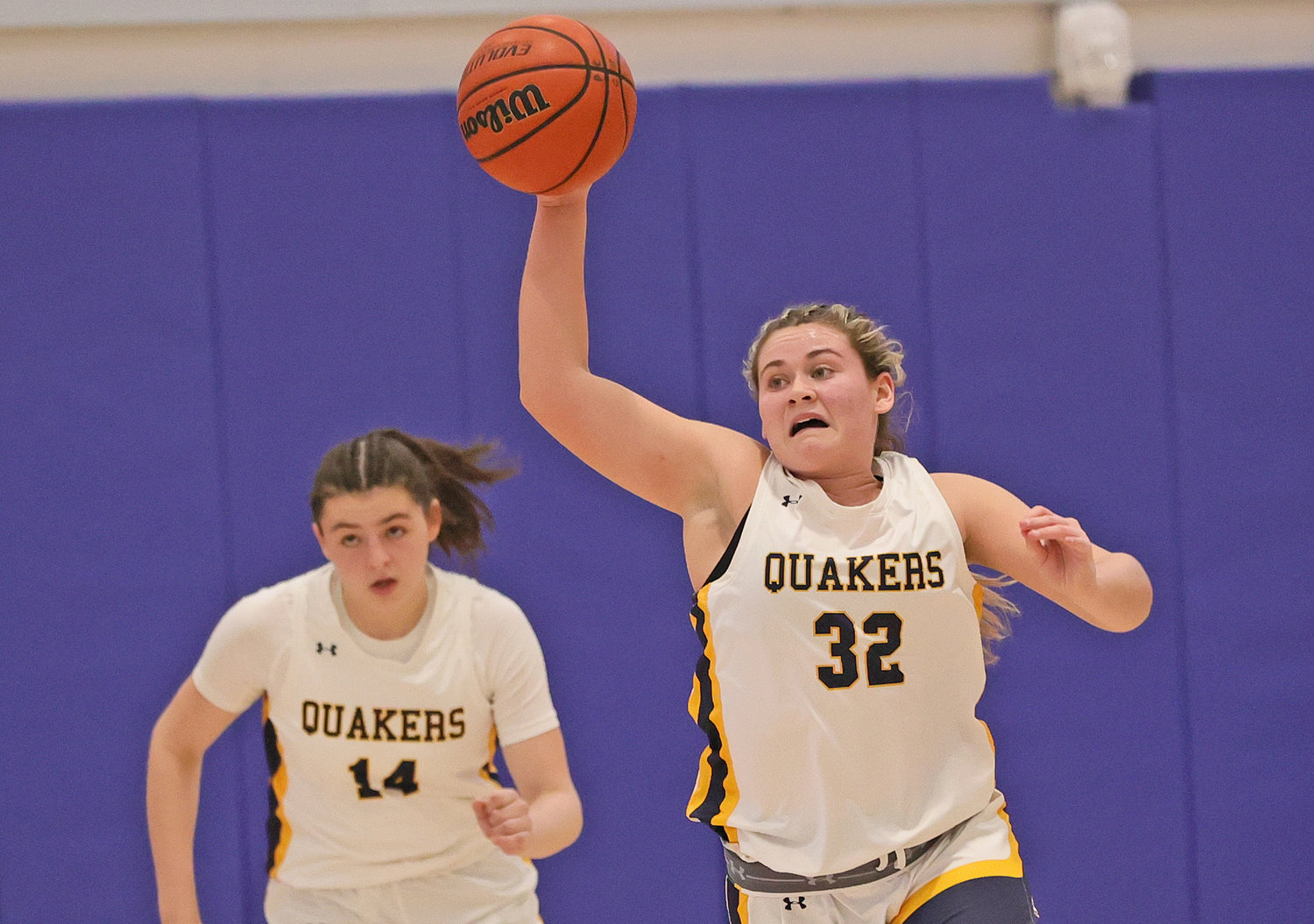 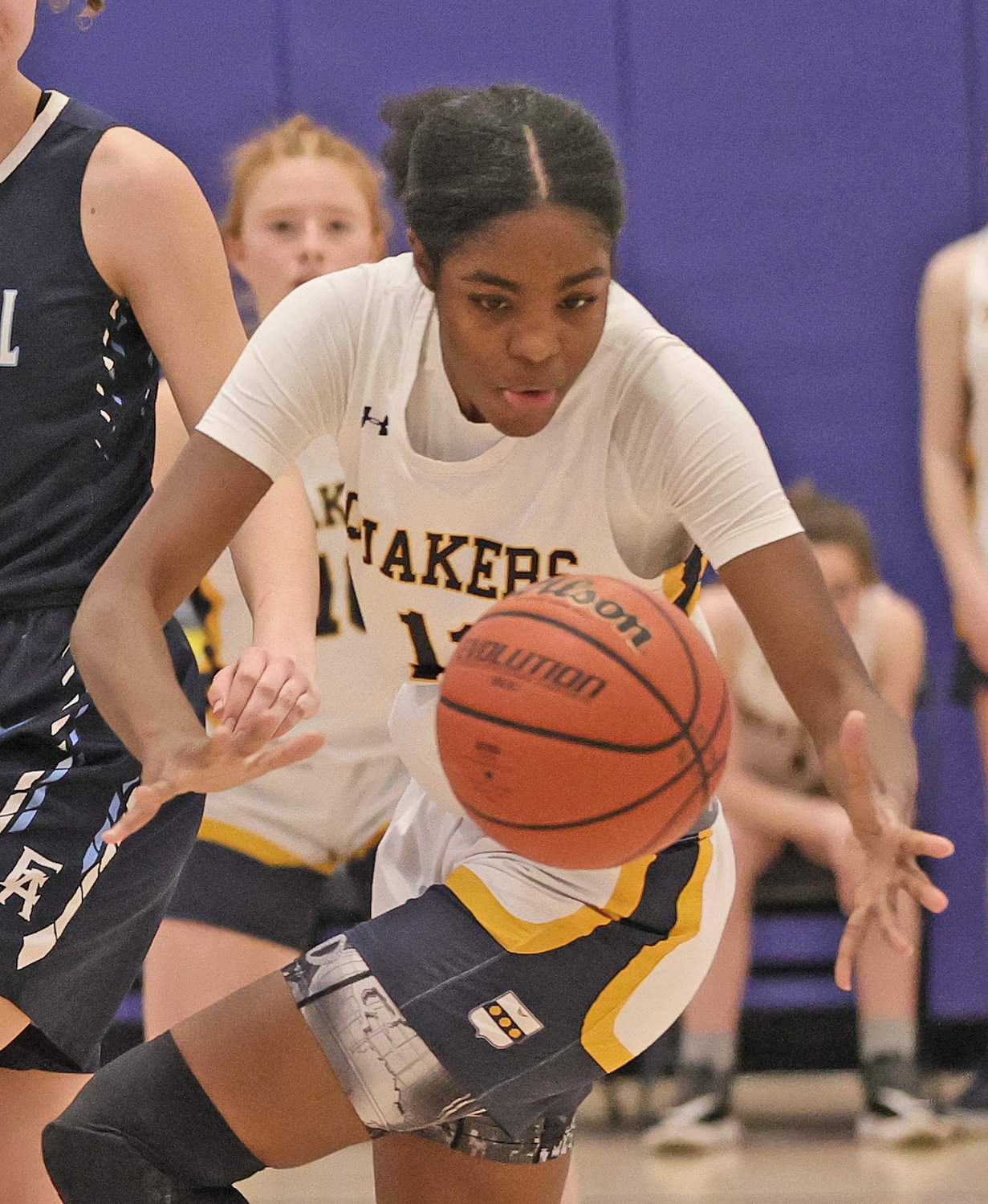 Aleah Snead, a PC junior, reaches out to grab a loose ball.  Photo by Tom Utescher
Previous Next
Posted Wednesday, March 9, 2022 10:12 am
by Tom Utescher

With the 2021-22 Inter-Ac League basketball championship already in their pocket, the girls of Penn Charter engaged in the semifinal and final rounds of the Pa. Independent Schools tournament last week. In the eyes of onlookers, the Quakers received more of a challenge than expected in a 52-45 semifinal victory over Episcopal Academy on Friday. A little over two weeks earlier, PC had beaten the Churchwomen by more than 30 points.

In Saturday's PAIS championship game at La Salle University, it was the Quakers who put up much more of a fight than many anticipated against the top seed for the tourney, Westtown School. The undefeated Friends Schools League champions, the Westtown Moose entered the fray with a record of 22-4, having lost only to out-of-state powers.

The PC girls took this one down to the wire, though. It wasn't until the last basket of the evening, on a drive by senior Meliah Van-otoo with 30 seconds to go, that Westtown to secured a 51-50 victory and the Indy Schools title.

Scoring in double digits for PC were junior Aleah Snead (17 points), senior Maddie Shoup (13), and freshman Kaylinn Bethea (11), while junior Bella Toomey had eight points and junior Gracie Shoup (Maddie's sister) rounded out the total with a free throw. Penn Charter, which had led 29-27 at halftime, ended its season with an overall record of 20-5.

Westtown received a game-high 28 points from small forward Kaylene Smikle before she fouled out of the game with just under two-and-a-half minutes remaining. Next among the Moose scorers was junior Grace Sundback, with 10 points, followed by Van-Otoo, with eight, and senior Helena Lasic, with five.

Westtown had reached the championship game through a 65-48 semifinal victory over fourth-seeded Germantown Academy the previous day.

Seeded second for the PAIS tourney, the host Quakers squared off against sixth-seeded Episcopal in Friday's other semifinal. In the quarterfinal round, PC had knocked off number seven Germantown Friends, 40-21, while Episcopal had won 65-45 over third-seeded Academy of Notre Dame. Notre Dame was playing without DePaul University signee Maeve McErlane, who had suffered a knee injury that required surgery.

During the Inter-Ac League campaign, Penn Charter had swept its home/away series against Episcopal, 47-32 and 63-32.

The third meeting last Friday in the PAIS tournament began with Toomey (a six-foot forward) scoring off a rebound for the host Quakers, then EA got a lay-up and a free throw from 6'2" junior Gaeli Keffer-Scharpf. A trey from Gracie Shoup and two more field goals by Toomey helped give Charter a 10-9 edge with under three minutes remaining in the quarter.

Scoring from guards Riley Cassidy and Amanda Purcell moved the EA Churchwomen in front, 15-10, then a little jumper by Shoup had the first period end at 15-12. The Quakers routinely make use of their bench, but now they were forced to due to early foul trouble. Toomey and Maddie Shoup each committed two fouls during the first six minutes. In the absence of Toomey, containing EA's Keffer-Scharpf fell largely to Snead, a 5"11" guard with a long reach.

Snead scored twice off of rebounds and hit a three-pointer in the second quarter. Bethea, the freshman, scored on a breakaway and Maddie Shoup returned to stick a "three" as PC climbed into 24-24 tie by halftime.

PC continued to foul in the second half, and at one point had eight team fouls to Episcopal's one. The Churchwomen went five-for-six at the foul line during the third frame, and they were leading 31-28 with a little over three minutes left. Charter edged ahead 32-31 with back-to-back buckets, Toomey netting a midrange jumper, and Gracie Shoup converting off of a steal.

EA then got into the one-and-one and made two shots, and the Churchwomen added two field goals for a 37-32 advantage. With 22 seconds left, Snead's pass set up a Toomey lay-up in transition, so Charter ended the third period on an up-note, while still trailing, 37-34.

For the visitors, poor offensive rebounding was becoming an increasing problem; they were often limited to a single shot on a given trip down the court. EA also missed two shots from the foul line as the Quakers took the game over with a 13-0 burst to start the fourth quarter. Maddie Shoup canned two treys, Bethea had a three-pointer and a lay-up, and Gracie Shoup scored on a drive during this surge.

After PC gained a 10-point lead, the Churchwomen made a final run, but it fell short. With a score from the paint with 28 seconds left, Keffer-Scharpf made it a 50-44 game, and also had a free throw coming. She missed it and Maddie Shoup wrangled the rebound. The ball was then tied up, but Penn Charter had possession.

A lone EA free throw with 18.6 seconds on the clock cut the margin to five, but Episcopal now had to foul and Charter had gotten into the double bonus. Bethea and Shoup each made one of two from the line to lock in the final score at 52-45.

Bethea and Toomey each came away with a dozen points, and Gracie Shoup finished with 11. Maddie Shoup wound up with nine points, and Snead with eight. The game-high of 17 points belonged to EA's Keffer-Scharpf.

For the Quakers it was on to Saturday's 6:00 PM championship game against Westtown. For a third season, the Moose were directed by veteran head coach Fran Burbidge. Earlier in his career, Burbidge coached WNBA star Elena Della Donne when she played at Delaware's Ursuline Academy.

This year, Burbidge directed another blue chip player, Smikle. Accorded a scouting grade of 93 by ESPN, the nationally prominent Smikle is listed by various sources everywhere from 5'11" to 6'1" in height, and has been designated a small forward, power forward, and wing guard. It's a testament to the versatility of the Farmingdale, N.Y. native, who signed with Rutgers University back in November.

Another player boarding at Westtown is 6'4" post player Lasic, who hails from Brampton, Ontario and who will be staying in the U.S. to play for the University of Pennsylvania.

Saturday's contest opened with fruitless possessions for each side, then near the end of the first minute Snead stuck a "three" from the right wing. The junior added a lay-up and two free throws later on, and Charter received a baseline jumper from Toomey and a lay-up in transition from Maddie Shoup.

Snead capped her 10-point quarter with another trey to put Penn Charter up by eight points. Westtown missed its first six field goal attempts, and the score was 8-0 before Lasic converted off a rebound to get the Moose on the scoreboard. Smikle got going with a basket off a steal and two free throws, then hit a late lay-up to cut PC's lead to six, 15-9.

Earlier in the opening quarter, senior Kayla Bradby had subbed in for PC when Gracie Shoup was called for her second personal foul.

As the second round progressed, Maddie Shoup and Snead continued to tack on some points, and Bethea hit a three-pointer from the left corner midway through the period. Westtown was getting closer, though. The Quakers led, 26-22, with a little over two minutes left in the half, then Smikle deposited a very long three-pointer and came right back to hit a lay-up on the drive.

With 1:22 remaining, the Moose had gone ahead, 27-26. Toomey banked in a short jumper to move Charter back in front, and with eight seconds left Westtown committed its 10th foul of the half. Maddie Shoup made the second of two free throws to fix the score at 29-27 for halftime. Smikle led all scorers at the break with 17 points, and Snead had 13 for PC.

Westtown's Rutgers recruit began the second half with another industrial-strength trey. She and Lasic then accounted for five straight points from the free throw line. Soon after that, PC's transition offense was under pressure from the Moose when the Quakers called a time-out. They were down, 35-29, less than two minutes into the third quarter.

They scored a lay-up and one free throw when play resumed, but when Westtown's Van-otoo scored back-to-back runners and Smikle stole the ball for another lay-up, PC called time again. Now the Quakers trailed 41-32 with 3:23 remaining in round three.

After Maddie Shoup revived Penn Charter with two free throws, Bethea drove the right baseline to score and then hit a transition lay-up. PC was still down three, but just before the buzzer Maddie Shoup heaved up a desperation shot from way out on the left wing. The ball banked into the basket, and the teams were tied at 41-41 heading into the fourth quarter.

After that, there would be no more ties. As the fourth frame began, Toomey banked in a shot on a drive, then Westtown's Smikle made the first of two free throws to put the scoreboard on a seesaw about two minutes in. Neither team led by more than two points until the final minute.

With 2:40 left a Bethea "three" from the right corner nudged Penn Charter into a 48-47 lead. At 2:24, Smikle committed her fifth personal foul, her team's seventh. Over the next minute-and-a-half, though, the Quakers would miss the first shot on three one-and one's, realizing no points at all out of a possible six.

Van-otoo bagged a little jumper from the lane, then Snead made a lay-up with 47 seconds left to give the Quakers the lead for the final time, 50-49. The Moose stepped ahead again when Van-otoo made successful drive along the left baseline, and Westtown immediately called time-out, leading 51-50 with 30.8 seconds showing.

The game was taking a physical toll on the players, with several hard collisions momentarily stopping the clock.

Neither team scored again. Once more, Penn Charter had opportunities at the charity stripe, but went zero-for-four at the line. The Quakers' last chance came when they inbounded the ball from their offensive baseline with three seconds left. They got the ball in, but a final shot wouldn't fall and Westtown prevailed.