At first, it seemed almost too easy as PC sprinted out to a 19-5 lead over the first seven minutes. 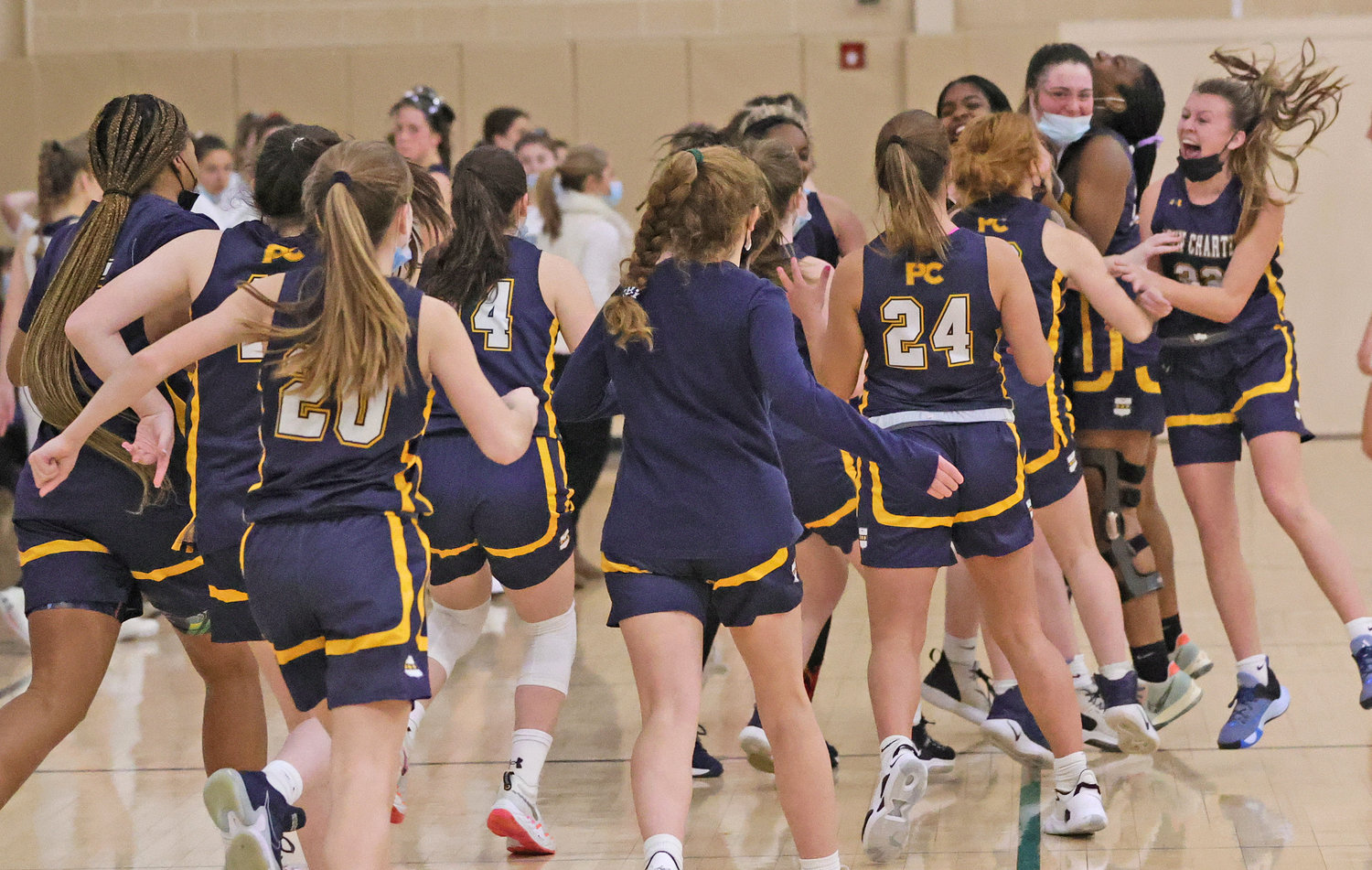 The Penn Charter players already on the court (right) are joined by the rest of their teammates as the final horn sounds at Notre Dame last Tuesday, signaling a major victory for the Quakers. (Photo by Tom Utescher)
Posted Thursday, February 10, 2022 6:00 am
by Tom Utescher

Looking to overcome the last major obstacle on the road to the 2022 Inter-Ac basketball championship, Penn Charter traveled to the Main Line last Tuesday to confront the Academy of Notre Dame, a team with an identical 7-1 record in the league.

At first, it seemed almost too easy as PC sprinted out to a 19-5 lead over the first seven minutes. The Irish scored the next eight points to make it a six-point affair, and early in the fourth quarter reduced the gap to four. The Quakers never relinquished the lead, though, taking away a 49-39 victory and a record of 8-1 in the league and 14-4 overall.

Getting a feel for how the teams matched up from their earlier encounter, two of Penn Charter's 11th-grade standouts felt their squad had certain advantages.

"One-on-one, we're faster than them, so we needed to get up and down the floor," said guard Aleah Snead, who scored six points and grabbed seven rebounds.

Forward Bella Toomey, who pulled in eight rebounds and was the game's high scorer with 16 points, said, "All of our players are super athletic, which I think helps us a lot."

Both teams had been unbeaten in the Inter-Ac going into their January 19 meeting at Penn Charter, which the hosts won, 59-45. Just three days later, PC was back down in a tie for first place with AND after Germantown Academy defeated the Quakers, 60-54.

Tuesday's outcome dropped Notre Dame into a tie with GA in the loss column, with two setbacks in the league. These two squads were set to duke it out for sole possession of second place last Friday, but icy weather conditions that evening caused the game to be postponed until February 22.

There was no official Inter-Ac champion recognized last season due to the shortened schedule; at the end PC and Notre Dame were tied for first place, having split in their home/away season while winning all of their other games against league members. After junior Kelsey Bess suffered a concussion in Charter's first league contest against Germantown Academy, she had to sit out the next game against Notre Dame, and the Irish won that encounter on their home floor.

Even with Bess back in the line-up for the rematch at PC, Notre Dame led by 15 points with less than six minutes remaining in the game. In an heroic rally, the Quakers outscored their guests 19-0 the rest of the way to win 61-57.

This winter, it's likely that Penn Charter's victory at Notre Dame last Tuesday confirmed the Quakers as the 2022 Inter-Ac champions, even with three games still to play. This week, Charter confronts two teams with little chance of beating the league leaders, fifth-place Baldwin School and seventh-place Agnes Irwin.

Fourth-place Episcopal Academy will not be as much of a long shot when it appears at PC in the Inter-Ac finale on February 15, although the Quakers defeated the Churchwomen, 47-32, when the teams met at EA late last month.

In Tuesday's clash at Notre Dame, PC's Shoup got the scoreboard rolling by making a pair of free throws, and then the first field goal of the game was a three-pointer from the right wing by senior Maeve McErlane, a senior shooting guard who has signed with DePaul University.

She would lead the Irish with 15 points, and that fell below her average in the low 20's thanks to tenacious defense by Shoup's sister Gracie, a junior.

Notre Dame retook the lead, 5-4, with two free throws by guard Annie Greek, but the hosts wouldn't score again until the very end of the quarter. By then, the Quakers had built a 19-8 lead.

Despite the impressive start, Toomey related, "We remembered how our team came back from being way behind in that one game last year, so today we knew we didn't have it won that early."

The 19-8 figure stayed on the board for almost two minutes in the second quarter, as the Irish missed a field goal attempt at one end of the floor, and the shot clock ran out on Penn Charter at the other end.

Senior point guard Julia Dever bagged a trey for the Irish, who then had junior forward Katie Halligan convert off an offensive rebound. The hosts were now back within six points of the Quakers. Halligan added five more points for Notre Dame later in the period, which ended with a halftime margin of five points for Penn Charter, 25-20.

Over the first half of the third quarter, field goals by each of the Shoup sisters and a jumper by Toomey overbalanced a sole McErlane "three" for the Irish. Foul calls were troubling the Quakers, though, both on offense and defense.

Still, with Toomey and Maddie Shoup scoring, PC took a 35-25 lead into the final minute of the period. On their next possession, the Quakers had a good chance to go up by a dozen, but in a series of shots and rebounds they missed four lay-ups in a row in a single possession.

Two reserve players for Notre Dame each found the hoop before the quarter expired, and the gap was back down to six points for the start of the fourth period. McErlane made good on a drive to cut it to four (35-31), but then neither team scored for several minutes as a late case of jitters seemed to set in with missed shots and turnovers by both teams.

Finally, the Quakers' Toomey scored off a rebound with five minutes left, and soon after that Maddie Shoup made a successful drive. McErlane hit for the Irish inside of the three-point loop, but then Bethea made a trey for the Quakers, and it was 42-33 when Notre Dame called time with 2:21 on the clock.

Scarlett Henry scored from the paint for the Irish, but after PC's Toomey drove the lane to score and Bethea followed in a jumper by Gracie Shoup, Charter's offensive transition found Toomey wide open near the basket. She scored to make it 48-35 with 39 seconds left.

Dever and McErlane added the last points for Notre Dame, which had to foul PC repeatedly to put the visitors into the bonus. Hitting the front end of a one-and-one, Maddie Shoup tacked the 49-39 final on the board.

Gracie Shoup came away with four points and Bradby had two for the winners. For Notre Dame, Halligan scored nine points to complement McErlane's 15.

UPDATE: On Saturday, Penn Charter put together a non-league bout with its School House Lane neighbor, Germantown Friends School. Earlier in the week, the GFS Tigers had defeated Friends Schools League rivals George School and Academy of the New Church to remain in second place in the FSL, behind Westtown School.

Penn Charter had just come off the highly emotional outing at Notre Dame, and head coach Joe Maguire has expressed concern in the past about his Quakers seeming somewhat listless in between games where they perceive serious threats to their season standing.

Germantown Friends played smart and disciplined basketball in the first half, while Charter often looked frenetic and unfocused. Toomey, PC's high scorer on Tuesday, hit a medium-range jumper 10 seconds into the game but didn't score again in the first half. The teams proceeded almost neck-and-neck up to a 10-10 tie.

Later, GFS senior center Clare Meyer hit a lay-up and a free throw to give the visitors a 13-10 lead at the quarter.

The Quakers had trouble containing the 6'3" Meyer, who would pile up 16 of her game-high 21 points before halftime. Senior Martina Kiewek (11 points total) and junior Caroline Putnam (three) hit from the outside for the Tigers to mix things up.

Snead, Charter's tall junior guard, kept the Quakers in contention with a dozen points in the first half, firing from inside and outside. Germantown still led at the intermission, 25-24.

The Tigers' last lead in the game, 30-28, came a little over a minute-and-a-half into the third quarter. For the rest of the period, they were outscored by their hosts, 14-2. Bethea netted a pull-up jumper to tie it at 30-all, then Maddie Shoup stole the ball back and scored to move the Quakers ahead for good.

Bethea bagged a three-pointer later in the period, and wound up scoring 10 of her 12 total points after halftime. Snead would also record a dozen points in the game.

On defense, PC did a better job helping against Meyer in the second half, and the players used their athleticism to force turnovers. Beginning the fourth frame with a 10-point advantage (42-32), the Quakers won the period, 13-5, looking much more like the team that had won at Notre Dame four days before.