The restrictions on the number of players imposed by the COVID-19 lockdown have frequently limited the Orchestra’s repertoire to either 18th century scores or expanded chamber music pieces composed in later eras. 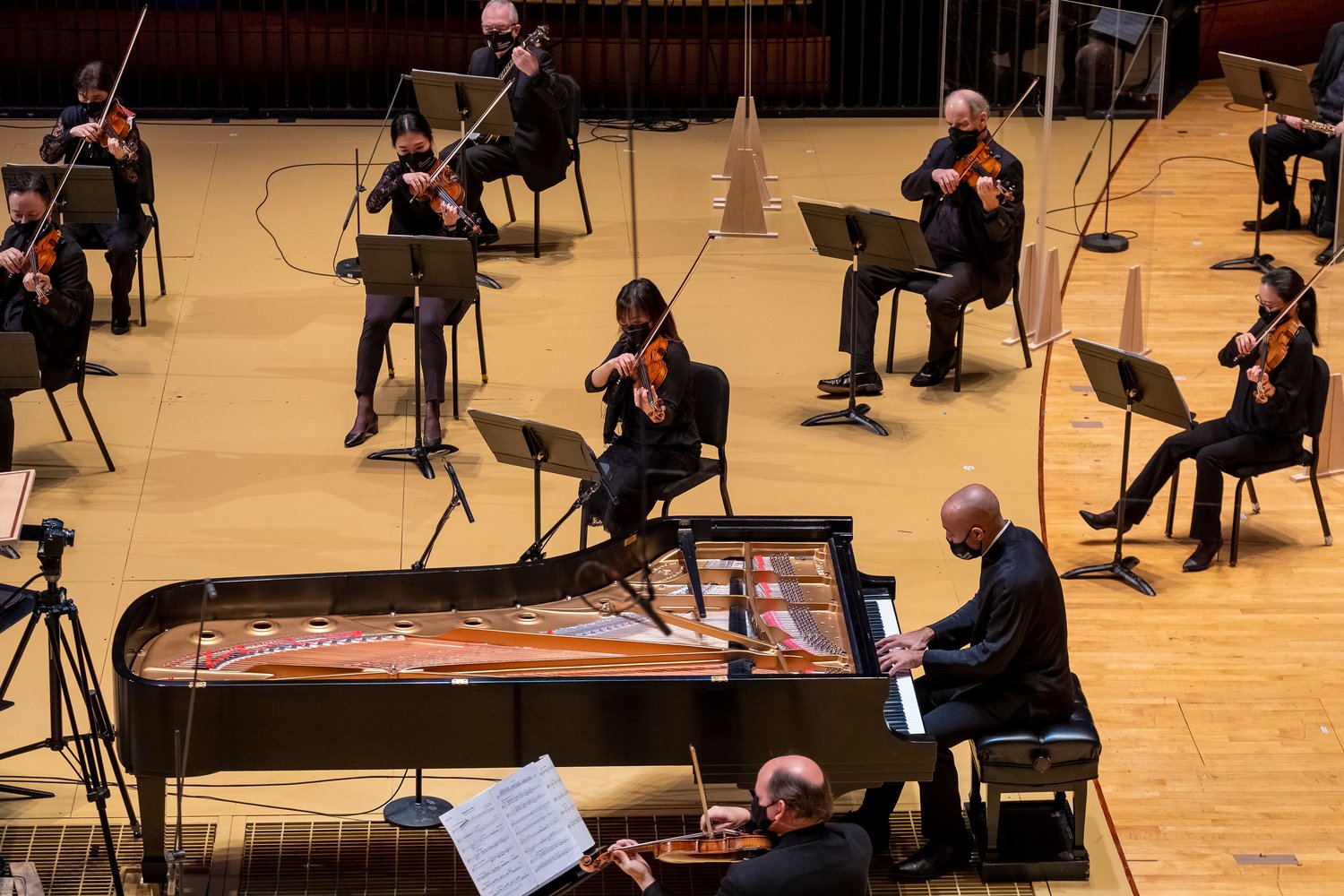 The Philadelphia Orchestra continued its “virtual” 2020-21 season with a program that focused on 20th century works. This was something of a change of repertoire. The restrictions on the number of players imposed by the COVID-19 lockdown have frequently limited the Orchestra’s repertoire to either 18th century scores or expanded chamber music pieces composed in later eras.

For their concert available online April 15-22, music director Yannick Nezet-Seguin led the Philadelphians in Morton Gould’s orchestration of Duke Ellington’s “Solitude,” George Gershwin’s “Rhapsody in Blue” in Ferde Grofe’s original version for piano and jazz band, and Igor Stravinsky’s “Suite from Pulcinella,” based on music by Giovanni Battista Pergolesi. The concert was performed on the stage of the Kimmel Center’s Verizon Hall and featured pianist Aaron Dielh as the soloist in the Gershwin.

I was told that Duke Ellington maintained that there were only two kinds of music – good and bad – and that he hoped and prayed that he made good music. On the basis of Morton Gould’s orchestration of Ellington’s “Solitude” and the rendition it received by Nezet-Seguin and the Philadelphia Orchestra, I’m happy to assert that “The Duke’s” hopes and prayers were answered.

Although relatively short in duration, “Solitude” is profoundly moving. Its mood of heartfelt nostalgia never drifts into sentimentality yet projects the deepest sentiments of fond remembrances called to mind in the luxury of solitude. The playing of principal harpist Elizabeth Hainen and the Philadelphians’ legendary string section shimmered delicately and glistened sumptuously, all under Nezet-Seguin’s firm yet sensitive hand.

“Rhapsody in Blue” has a storied history. Supposedly Gershwin hadn’t written down a note of the score when he read in the pages of the New York TIMES that he would premiere it in February of 1924 in a concert entitled “Experiments in Modern Music” conducted by the jazz band leader Paul Whiteman in New York City’s Aeolian Hall. Proving that necessity can, indeed, be the mother of invention, he sketched out the band part in a piano arrangement and left most of the piano solo part to be improvised by him at the concert and written down later. Whiteman handed over the piano sketch of the band part to his orchestrator, Ferde Grofe (of “Grand Canyon Suite” fame), and the first performance took place to great acclaim.

In 1926, Grofe produced what he called the “theater orchestra” version, with the full symphony orchestra arrangement completed in 1942. It’s not uncommon nowadays to hear any and all of the versions of “Rhapsody in Blue.” The original jazz band arrangement is the edgiest of the three, the theater (chamber) orchestra version is pleasantly intimate, and the symphonic setting evokes the sounds of Hollywood at its most lavishly glamorous.

Aaron Diehl’s reading of the piano part was sparingly spiced with his own improvisations during the solo portions but was technically tentative and harmonically cautious throughout. For those of us who remember the sizzling renditions of the “Rhapsody” by either Leonard Bernstein or Andre Previn, Diehl’s interpretation was a tad disappointing.

For the Philadelphians, the performance was a homecoming. Under the baton of their longtime music director, Eugene Ormandy, they recorded the work in 1945 with Oscar Levant, the close friend of both George Gershwin and his lyricist brother, Ira. Levant remains the iconic interpreter of Gershwin’s piano music and Ormandy was the greatest accompanist on record.

Following the usual revisionist downplaying following the death of any great artist, Igor Stravinsky (1882-1971) is once again receiving his due acknowledgement as one of the greatest if not the greatest all-around classical music composer of the 20th century. His ability to have transformed his superficial stylistic personality according to the changing times around him is now recognized as just that: on the surface. But look beneath that glittering top level and you find a genius who invested tradition wherever he found it with bracing modernity.

Looking back into the past, Stravinsky found charming little pieces by Pergolesi and his contemporaries and transformed them into tart neo-classical vignettes. Nezet-Seguin and the Philadelphians played then with technical brilliance and stylistic sophistication.