Philadelphians show their support for Ukraine during its time of need

Philadelphians show their support for Ukraine during its time of need 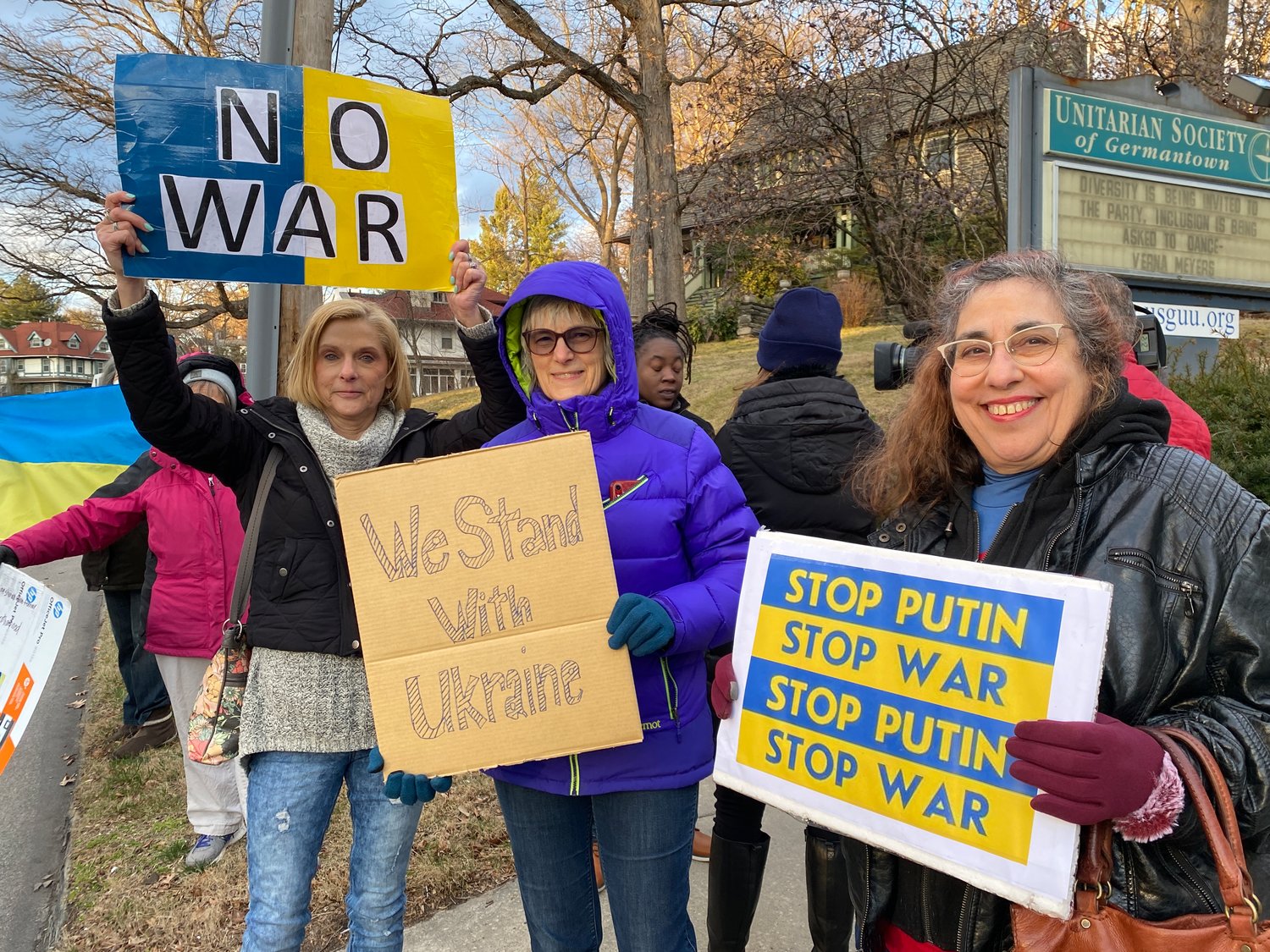 Protestors show support for Ukraine at a demonstration outside the Unitarian Society of Germantown in Mt. Airy. Photo by Tom Beck 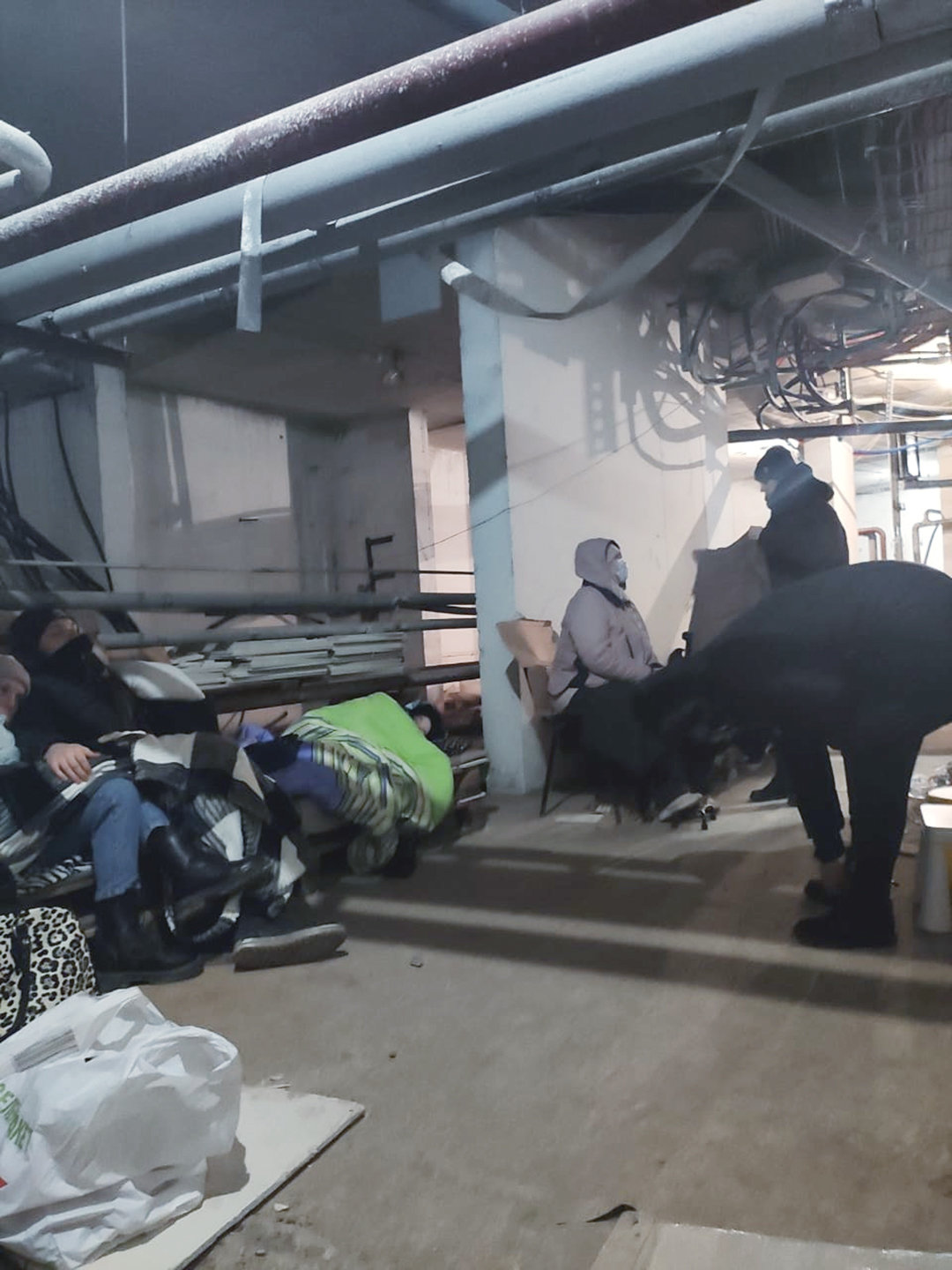 Marina Batt’s family and their neighbors in a basement bomb shelter in Ukraine.
Previous Next
Posted Tuesday, March 1, 2022 1:26 pm
by Kristin Holmes and Tom Beck

For Mt. Airy resident Marina Batt, Russia’s invasion of Ukraine is a deadly threat to family members, who early Tuesday were stuck in the war-torn country.

“They are constantly afraid for their lives, not knowing whether there will be an airstrike,” said Batt, who immigrated to the U.S. with her family when she was 7. “They are on high alert, but they are very strong people and dedicated to keeping Ukraine.”

Batt’s father, brother and stepmother live in a small town southwest of Kyiv, the country’s capital city. Her grandfather, aunt and uncle live on a farm about five hours from the city.They spend their nights - and some of their days -  huddled in basements that serve as bomb shelters.

“I was just scrambling to find out information so [my family] could make the best possible decision for their safety,” she said. Her father and his family had tried to leave in their car, but could find no way out and returned to their condominium.

With plights like Batt’s in mind, residents of Northwest Philadelphia protested in solidarity with Ukrainians all over the globe Friday evening at an emergency vigil outside the Unitarian Society of Germantown church in the 6500 block of Lincoln Drive.

“I feel very strongly that the Ukrainian government is a democratic government, just like us,” Glenside resident Cindy Shapiro said as passing cars honked horns in solidarity. “If a totalitarian regime can just come in and just try to destroy a country, then the same thing can happen here. We need to fight for democracy because not only are the Ukrainian people at risk, the world is at risk and America is at risk. If we don't stop it here, it's going to keep going.”

‘“We need to support our siblings in Ukraine,” she said. “We need to make a lot of noise and gather up supporters.”

“A sovereign nation is being invaded for no provocation,” she said. “I'm not surprised because it’s still Putin, but it’s still shocking that this would be happening in 2022.”

Rabbi Shawn Zevit of Mishkan Shalom synagogue in Manayunk-Roxborough remarked on the parallels between Russia’s invasion of Ukraine and World War II.

“The issue of what this means in Europe and in the world so many years later - and the ignoring of so many aspects we thought we'd never see again, which is what Russia's provoking here - that's shocking on a humanitarian level,” he said.

Throughout the weekend, area residents rallied in support of Ukraine. On Friday, hundreds protested outside Philadelphia City Hall, where speakers from the Ukrainian community and other Eastern European communities stood in opposition to Russia’s war against Ukraine. On Sunday, demonstrators gathered outside Independence Hall.

“For two years, we have stood in solidarity for racial justice,” Kaylna said Friday outside the church. “Today we stand in solidarity with the Ukrainian people against an unjust war.”

Kalyna’s parents were refugees from Ukraine after World War II, and she still has many close relatives in the country.

Batt, who regularly calls family members in Ukraine, reassures them that government leaders around the world are showing support by imposing sanctions against Russia, providing weapons to Ukrainians and opening borders to those fleeing the war.

The support from these governments - as well as demonstrators such as Zevit, Shapiro, Griffin-Rogers and Kalyna - give Batt’s family members a small feeling of relief, she said.

“They are relieved to know that the world is standing by them,” Batt said. “All we can do is pray and wait and hope that Ukraine prevails.”