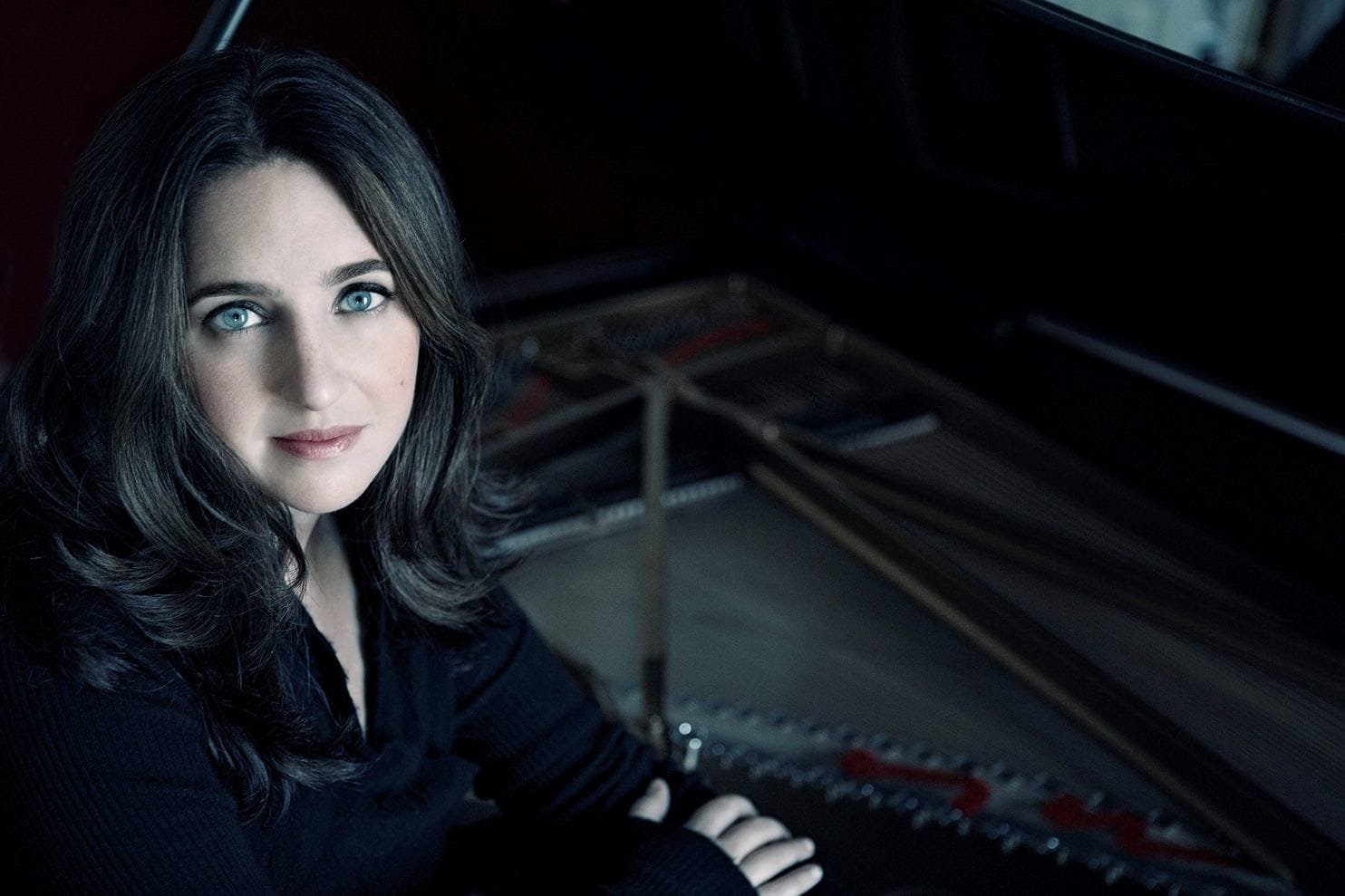 Pianist Simone Dinnerstein joined Dirk Brosse and the Chamber Orchestra of Philadelphia Nov. 7 for performances of Bach’s Keyboard Concerto No. 7 in G minor and Philip Glass’ Piano Concerto No. 3.
Previous Next
Posted Friday, November 19, 2021 8:52 am
by Michael Caruso

The first full weekend of November offered me the chance to hear performances given by two pianists of extraordinary talent. The first was Noah Hardaway, the second Simone Dinnerstein; the former was heard in a solo recital while the second performed as the soloist with the Chamber Orchestra of Philadelphia. Hardaway’s recital took place in St. Paul’s Episcopal Church, Chestnut Hill, Friday, Nov. 5; Dinnerstein and the Chamber Orchestra played in Kimmel Center’s Perelman Theater Sunday, Nov. 7.

Hardaway’s performance was this year’s second installment of St. Paul’s Church’s “Five Fridays” of fundraising recitals that support Philadelphia Interfaith Hospitality Network and Face to Face Germantown, two non-profit organizations that aid the homeless and help them find safe housing and meaningful employment throughout Northwest Philadelphia. The parish covers the cost of each of the five concerts so that the entirety of the ticket sales is given to the two charities.

Hardaway’s program was a daunting one, even for such a technically gifted young virtuoso as he proved himself to be. The recital opened with Ludwig van Beethoven’s Sonata  No. 32 in C minor, Opus 111, and ended with Modest Mussorgsky’s “Pictures at an Exhibition.” As though those two selections weren’t enough to terrorize the faint of heart, stashed in between them was Frederic Rzewski’s “Winnsboro Cotton Mill Blues,” No. 4 from this “North American Ballads.”

In a way similar to that of his string quartets, one can chart the progress of Beethoven’s compositional development through his 32 piano sonatas. Reputedly a pianist of outstanding talents himself, Beethoven composed them (as well as string quartets) across the span of his three stylistic periods: early, middle and late. Not surprisingly, these three periods directly coincide with his ongoing loss of hearing.

The first period, when he could hear close to perfectly well, was cast in the 18th century classical mold of his teacher, Franz Joseph Haydn. As he began to lose his hearing, he entered the more dramatic and revolutionary second period, in which he violently fought against all the artificial constraints of classicism and almost single-handedly opened the door into the 19th century’s romanticism. Once his hearing was completely gone – and he no longer had to listen to inferior musicians playing his masterpieces badly – he achieved the other-worldly serenity of his last period.

His final five piano sonatas – Opuses 101, 106, 109, 110 & 11 – are the keyboard manifestations of this stylistic culmination. In Beethoven’s day, this supreme quintet of sonatas was considered so bizarre that it wasn’t until the 1840s (more than a decade after his death) that they were first performed in public. The musician who solved their collective riddles was none other than Franz Liszt.

Even in our time, Beethoven’s final five piano sonatas remain a Himalayan challenge to pianists. Of them all, the ultimate Opus 111 in C minor, remains the most difficult to play, both technically and interpretively. All the more credit, then, goes to Noah Hardaway for his sterling rendition Friday evening.

He caught the tonally craggy yet sublime spirituality of the opening “Maestoso” through playing that was both virtuosic and reflective. His rhythms were precise and edgy, his voicing of the various contrapuntal textures was clear yet well blended, his phrasing was dramatic yet underpinned by lyricism, and he maintained a tight grip on the composer’s expansive concept of sonata-allegro structure.

Hardaway projected the brutality of the Rzewski and dazzled with the colors of the Mussorgsky.

Bach and Glass Together

Although keyboard concerti by J.S. Bach and Philip Glass don’t automatically strike the average classical music lover as forming a perfect pair, they came close to doing so Sunday afternoon, Nov. 7, when pianist Simone Dinnerstein joined Dirk Brosse and the Chamber Orchestra of Philadelphia performing them one after the other in Perelman Theater. The former was the Keyboard Concerto No. 7 in G minor and the latter was the Piano Concerto No. 3.

Brosse and the Chamber Orchestra accompanied masterfully, and gave a thrilling reading to Jessie Montgomery’s string orchestra version of “Strum.” The Fairmount String Quartet played the chamber version recently at the Episcopal Church of St. Martin-in-the-Fields.