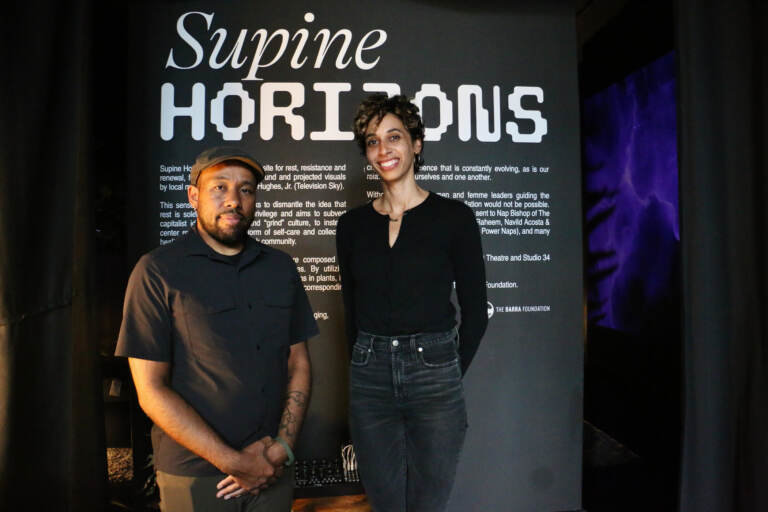 Philadelphia artist Gralin Hughes Jr. and Nicole Pollard, curator of lived culture at Philadelphia Contemporary, brought ''Supine Horizons'' to the KDD Theatre in Germantown. The immersive exhibit encourages visitors to take a nap for the good of the cause.
Photo by Emma Lee/WHYY 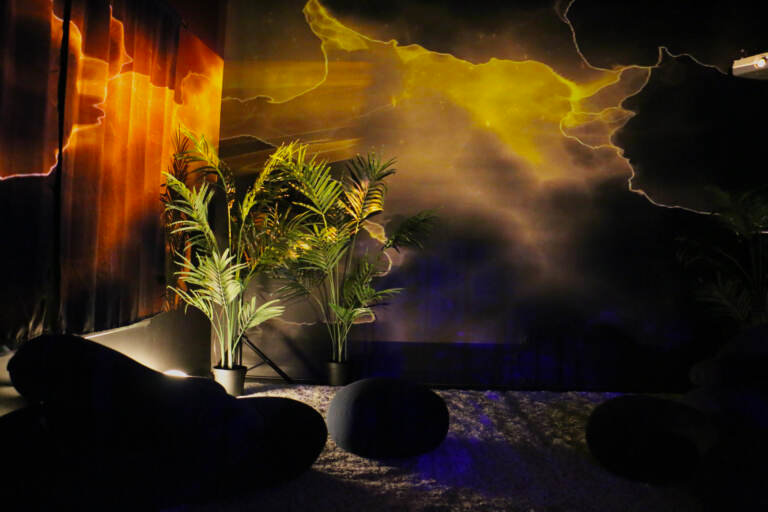 Light flows across the walls at the KDD Theatre in Germantown, which is host to ''Supine Horizons,'' an immersive exhibit that encourages visitors to seek relaxation as an act of resistance.
Photo by Emma Lee/WHYY
Previous Next
Posted Thursday, November 10, 2022 12:00 am
by Peter Crimmins, WHYY

The sign invites passersby inside an immersive art installation to engage in a potentially radical act: to relax.

“I think it’s very difficult for people to relax. Sometimes people need encouragement,” artist Gralin Hughes said. “I created this space as a calming and relaxing place for people to come and take a rest, take a break, or even maybe fall asleep.”

Called “Supine Horizons,” Hughes’ installation inside what is usually a dance studio for Kinesics Dance Dynamics Theatre is a dimly lit space filled with furnishings with soft textures (visitors are encouraged to take off their shoes and feel the deep shag rug underfoot), gently animated video abstractions, and ambient music composed by the artist.

At first impression, the calmly pulsating environment could resemble a day spa, but with several important differences: it’s free, and there is no expectation of any kind of transaction. Nothing is for sale. There are no instructions or guidance as to what to do.

Curator Nicole Pollard, with the arts-presenting organization Philadelphia Contemporary, said some people may at first feel disoriented by an invitation to do nothing.

“I think that comes from this larger, very messy system that is capitalism,” she said. “That fabricated need of always having something new or needing to buy something communicates to us that there’s no room to rest or stop. So much of that we hold in ourselves, more than we realize. A lot of people, if you ask them what resting looks like for them, they don’t even know how to tell you.”

Hughes is a Philadelphia-based multi-disciplinary artist and performer whose sound and projection work has been seen in various places around the city for the past few years. For his first solo installation, he created “Supine Horizons” as a subtle homage to his own family: the video projections of tumbling, jagged lines resemble auras, or energy fields that might radiate from his ancestors.

“It’s the release of all the bad energy,” Hughes said. “It’s being surrounded by the spirits, by the energy of a family, and being protected.”

In particular, Hughes thought about his grandmother who had seven children and, to his knowledge, never stopped working and never complained about it.

“The messages that I received were that, for people of color, I had to work extra hard in order to get the same recognition that other people might have gotten,” he said. “The idea of stopping and relaxing was always frowned upon by my family. You have to keep grinding, you have to keep working, otherwise people are going to think you’re lazy. I really want to change that way of thinking.”

In the lobby of the space, visitors can pick up a newsprint brochure that can be read before or after immersion in the space (it’s too dark to read while inside the installation). Entitled “Rest,” it explains the physical and mental health benefits of resting, and presents rest as a form of political resistance.

“Rest is political because it requires us to push back against the many systems in our country that are designed to keep people in a constant grind or struggle to stay alive,” reads “Rest.” “Without rest, we cannot access our political and creative freedom.”

Recognizing the health benefits of resting is, of course, not new, but recently there has been a growing movement to use relaxation as an act of defiance.

In her new book, “Pause, Rest, Be: Still Practices for Courage in Times of Change,” author Octavia Raheem writes, “To access the wisdom needed now, I must be still. A movement is coming and, first, we must be still.”

Poet and founder of the “Nap Ministry” Tricia Hersey advises in her new book, “Rest is Resistance: A Manifesto,” that “you must resist anything that does not center your divinity as a human being. You are worthy of care.”

The “Rest” brochure at “Supine Horizons” points to further reading, including those two books and several others.

Pollard said the installation is meant to be an introduction for people to think seriously about resting, and help them explore ways they might adopt practices into their own lives and homes. To that end, trust has to be established at the door, because rest will not happen in the space if people have their guards up, or worry they will not “get” the art.

“There will be a few folks here that we’ve hired to welcome folks into the space. There have been a lot of conversations around how to establish that trust,” Pollard said. “How to ask the right questions to really make sure that people feel as though they can drop in and that they’re being cared for.”

Visitors will be limited to six at any given time. People can use time slots as drop-ins or reserved online in advance. Visitors can remain as long as they wish, and can even fall asleep.

For HughesGralin, people sleeping in his installation would be the ultimate compliment. Visitors will be asked at the door how they would like to be woken should they doze off.

“I wanted to make the space feel calming, really trying to think about the color palettes, the motion, the speed in which things are moving,” he said. “I thought a lot about what is the right tempo to slow down your heartbeat. What is the speed that feels right?”

“Supine Horizons” will be on view until December 20. During its run, Pollard, who is also a yoga instructor, said she will program some activities in the space, such as yoga and acupuncture.