While most kids who are not able to attend in-person school classes because of the pandemic are no doubt frustrated and upset at the forced isolation, one 12-year-old Germantown resident has been … 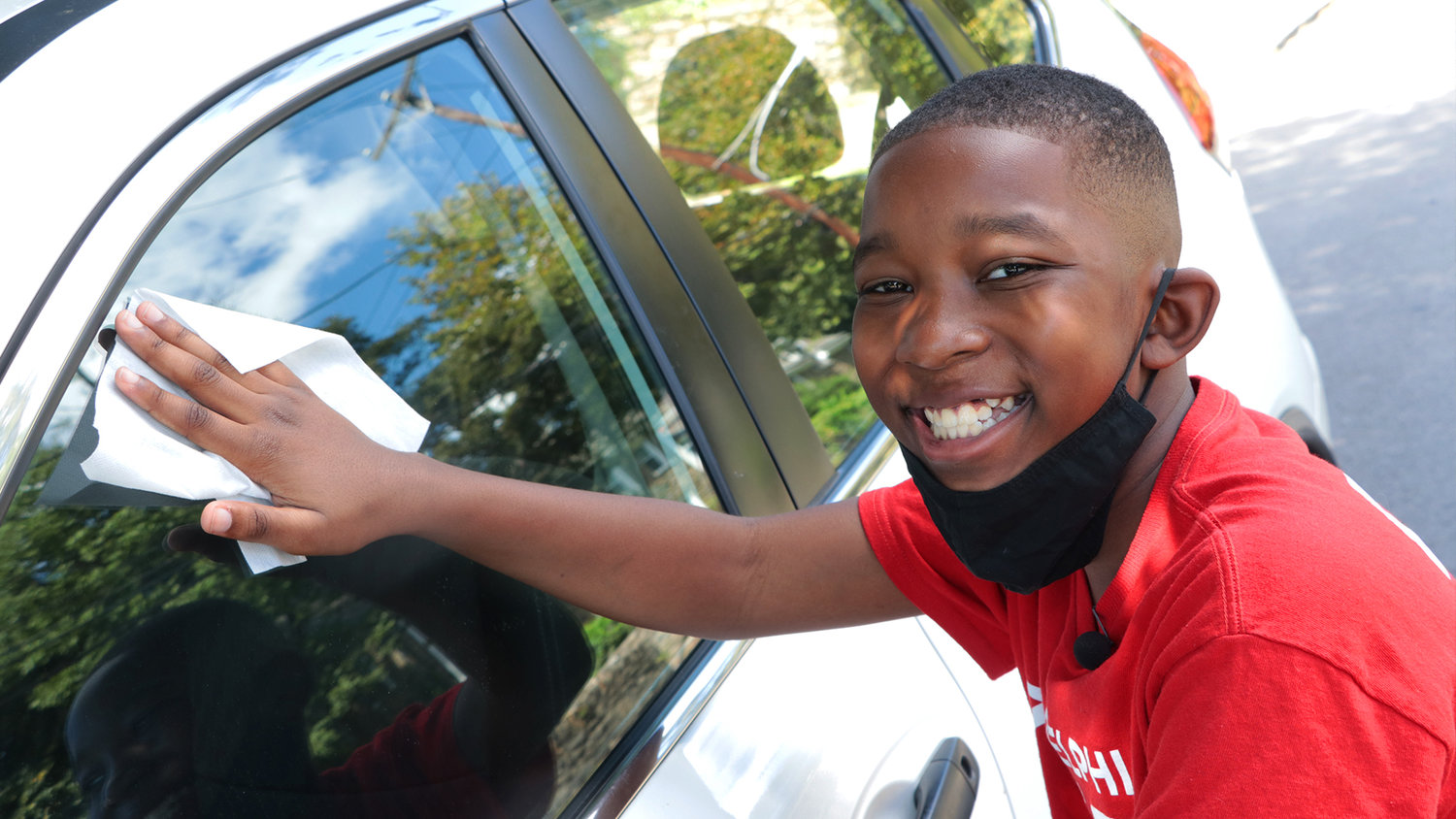 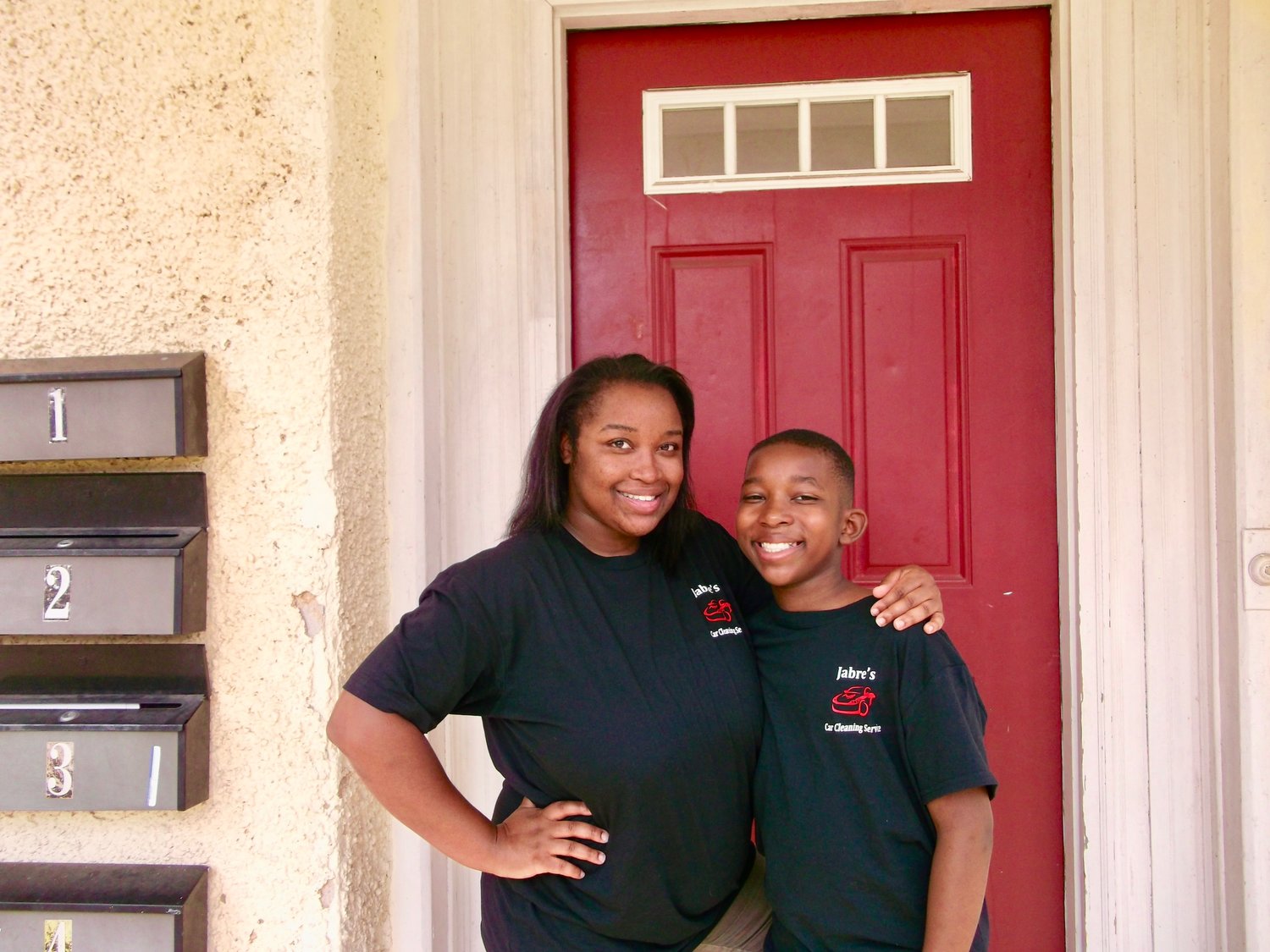 Sabrina, a very proud mom, stands with her entrepreneurial son in front of their Germantown
Previous Next
Posted Thursday, September 17, 2020 10:11 am
by Len Lear

While most kids who are not able to attend in-person school classes because of the pandemic are no doubt frustrated and upset at the forced isolation, one 12-year-old Germantown resident has been able to make ice cream out of ice, in a manner of speaking. (“Make lemons into lemonade” has been done to death.)

Jabre Dutton, a 7th grade student at Wissahickon Charter School, was doing a favor recently by cleaning out the inside of a car belonging to his mother, Sabrina's, friend. The friend paid Jabre with video game bucks, which Jabre used to play his favorite video game, Roblox, an online game platform and game creation system that allows users to program games and play games created by other users.

“I then told Jabre that he could probably make real money by cleaning people's cars instead of just video game bucks,” said Sabrina, 29, a single mother who grew up in West Oak Lane and for the last four years has been a research medical assistant in the genetics department at Children's Hospital of Philadelphia. “So I asked a friend at work to make up a flyer for me about the car cleaning, and we posted it all over social media.”

Before you could say “sports car,” requests were coming in from car owners only too anxious to avail themselves of Jabre's actual business, now called Jabre's Car Cleaning Service (JCCS), which started in August. So far Jabre, who has no siblings, has cleaned 20 cars and is booked up through Oct. 17, so he is not putting the brakes on the work. He and his mom go to the customer's home instead of having the customer come to them. Most customers have been in Northwest Philly, but the mother/son team has traveled as far away as Willow Grove to clean a car's interior. JCCS only cleans the interior of each vehicle and prioritizes safety amidst the Covid-19 pandemic.

According to Lynette M., one of Jabre's first customers, “Jabre was on-time, focused on his work and polite. He was professional and did a great job!”

Most customers now hire Jabre (pronounced “Jabree;” he was given the name because it sounds like Sabrina) through the “booksy” app, but he also has an email address. The basic cleaning of the interior of a regular-sized car costs $30; for a large car it costs $45. Extra services can bring the price up as high as $70. It takes anywhere from one-and-a-half hours to two-and-a-half hours to complete a job, depending mostly on the size of the car. “He is a perfectionist,” said Sabrina about her son's skill with vacuuming, polishing and treating stains.

Jabre is saving the money he is making to help set up a Limited Liability Corporation (LLC), which limits the personal liability of an owner because an LLC is legally separate from its owners. Other Black businesses in the area have also lent a hand. One, “I Love Thy Hood,” gave Jabre $100 after he cleaned their vehicle. One Mt. Airy resident who learned about Jabre gave him a $100 Google Play gift card as a birthday present. (He turned 12 on Sept. 2.) He was also given a vacuum cleaner, and he has arranged meetings with other Black business owners in the area to learn from their experiences.

“I really want Jabre to have friends who are also in the entrepreneurial world so that he can ask them questions about how to do things in business and how to deal with the stresses of business,” said his proud mom. “I want those other Black business owners to inspire Jabre, and I want him to inspire other Black kids to think about starting their own businesses. It can be done at any age, which Jabre has proven.”

Although he is not yet a teenager, Jabre already knows about things like credit scores and investing money wisely instead of just spending it all right away on transitory pleasures. And when the cold weather grips the area, he might de-accelerate the car cleaning business and put a snow clearing business in gear.