Perhaps the most amazing aspect of AVA’s presentation of “La Boheme” is its incredibly imaginative use of the tiny space of the Warden Theater. 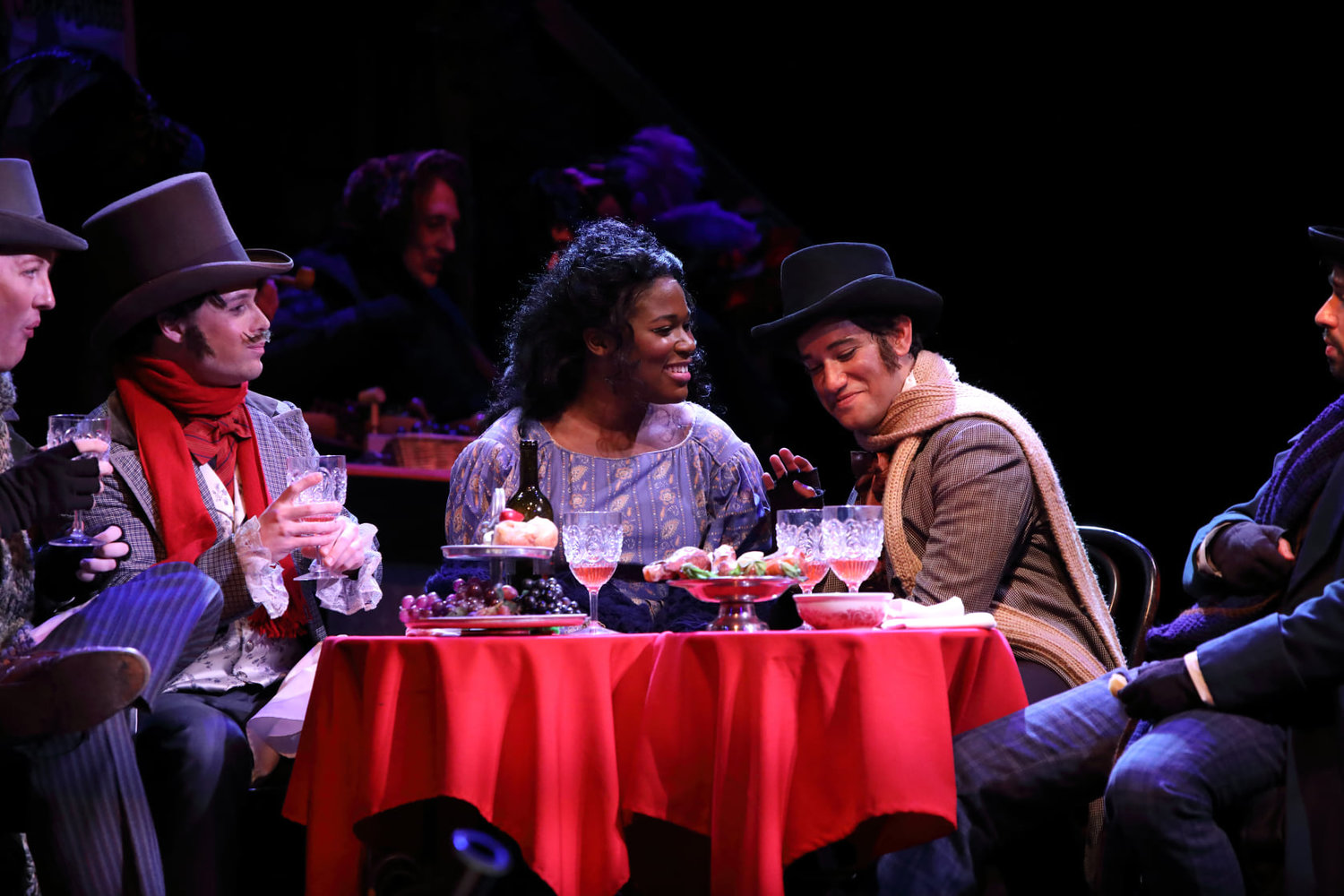 The cast of the Academy of Vocal Arts production of Puccini's La Boheme.
Posted Thursday, May 12, 2022 11:29 am
by Michael Caruso

Local opera lovers enjoyed the rare opportunity to experience performances of two different operas in two distinctly different presentations over the same weekend. Opera Philadelphia opened it mounting of Giuseppe Verdi’s “Rigoletto” April 29 in the Academy of Music; the following evening, April 30, the Academy of Vocal Arts premiered its production of Giacomo Puccini’s “La Boheme” in its own Helen Corning Warden Theater.

I caught opening night at AVA and then took in the Sunday matinee at the Academy. I couldn’t help but think: Who needs either London or New York City with such generous offers here in Philadelphia.

The general consensus of opinion has always been that while the “big three” Puccini operas (“La Boheme,” “Madama Butterfly” and “Tosca”) may be more popular than any trio of Verdi’s operas (such as “Rigoletto,” “La Traviata” and “Il Trovatore”), Verdi is nonetheless Italy’s greatest composer of operas. The rationale often goes that Puccini is sentimental while Verdi is elemental.

I have always disagreed, and never more so than after having seen these two productions two days in a row. For me, Verdi is melodramatic while Puccini is universal.

Francesco Maria Piave’s libretto for “Rigoletto” is little more than fictitious junk. I sometimes get the feeling that nearly every word of it is a lie, including “and,” “the” and “but.” Verdi’s sense of dramatic narrative isn’t much better. Who besides him would have two characters, such as Gilda and the Duke in “Rigoletto,” sing the word “addio” (goodbye) at the top of their lungs a good two dozen times before actually parting? Or have Gilda stabbed three times and then wrapped in a blanket for several hours and still have the strength to sing a recitative, aria and cabaletta before finally dying?  When you add all of these quibbles to Verdi’s contemptuously miserable scoring, you can understand my questioning his exalted status.

When Puccini has Mimi, in “La Boheme,” finally succumb to “consumption,” he sets her vocal line simply and sparsely and strips down his usually sumptuous orchestration to its barest minimum. Everyone else around her may be singing up a storm, but not Mimi and not the instruments accompanying her. She and they are, to coin a phrase, “as quiet as death.”

In spite of the obstacles facing them all, Opera Philadelphia’s “Rigoletto” is a successful venture into opera’s standard repertoire. Corrado Rovaris conducted his singers and players with consummate stylistic integrity and supportive sensitivity. Although I disagreed with stage directors Lindy Hume and Daniel Pelzig’s decision to “update” the setting to contemporary times – I think the early years of Benito Mussolini’s ruinous rule in Italy would have been more convincing – the acting of the singers and the overall staging worked well.

Baritone Anthony Clark Evans made a convincing Rigoletto, singing with tonal beauty. Soprano Raven McMillon was a sympathetic Gilda, undone by her lack of experience with men and singing with a sweet color to her voice. Tenor Joshua Blue was a solid Duke of Mantua. Bass Wei Wu and mezzo Kristin Choi rounded out the cast as the assassin Sparafucile and his sister Maddalena.

AVA’s “La Boheme” is a complete triumph from its start to its finish. The opera remains a concise masterpiece of music theater. Every word of the libretto by Giuseppe Giacosa and Luigi Illica rings true, and Puccini set it with overwhelming musical artistry and theatrical mastery. Christofer Macatsoris conducted the AVA Opera Orchestra like the towering maestro he is and Jeffrey Buchman’s stage directing never missed a beat or overplayed its hand.

Opening night’s cast was superb. Soprano Renee Richardson displayed the freshness of voice of the young woman she is, perfectly paired with the dramatic instincts of a seasoned actress. Tenor Sahel Salam portrayed Rodolfo with theatrical ardor and vocal razzle-dazzle. Baritone Kevin Godinez was a vocally robust and dramatically sympathetic Marcello and soprano Emily Margevich was a sparkling Musetta.  Bass-baritone Peter Barber was a solid yet sensitive Schaunard while bass Griffen Hogan Tracy was a deeply resonant Colline.

Perhaps the most amazing aspect of AVA’s presentation of “La Boheme” is its incredibly imaginative use of the tiny space of the Warden Theater. It’s not surprising that the directorial team convincingly recreated the cramped apartment of four “Bohemian” guys. What is amazing is that they were able to open it up into the second act’s “Café Momus” scene on Christmas Eve and the then third act’s tollgate setting outside of Paris. Even with minimal props, the sets looked real.