What began last year out of … 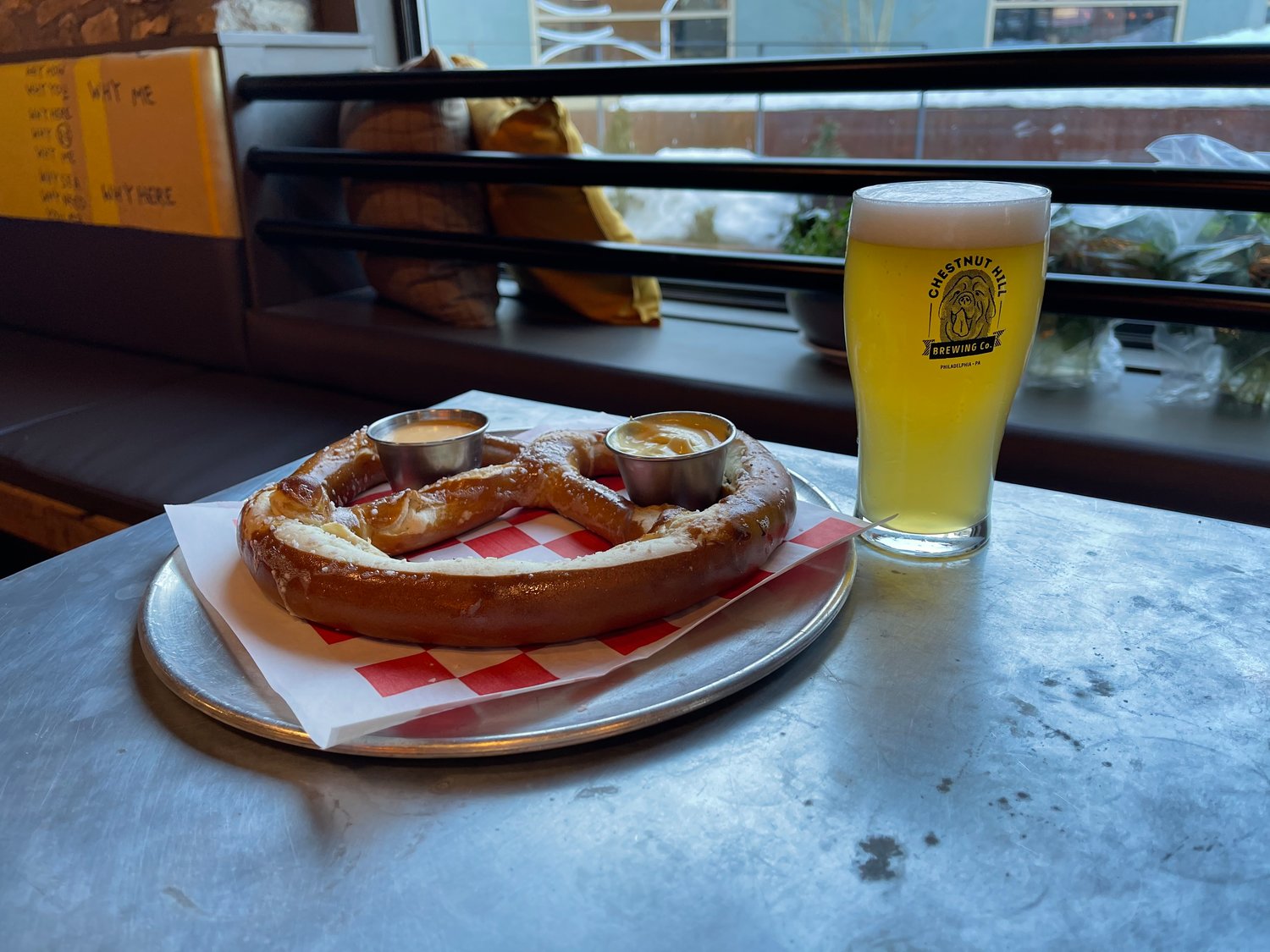 What began last year out of necessity when retail beer stores were closed for some time has stuck around, with the American Homebrewers Association even cited as saying it saw a marked increase in interest during this past year.

Part of the allure, aside from more time on everyone’s hands, is that craft beer has so many flavor profiles and accompanies so many foods so well. And when it comes to pairing the brews with meals, there really aren’t any hard-and-fast rules.

While brewing beer at home is a small scale commitment, the Chestnut Hill Brewing Company Taproom professionally makes more than half a dozen specialty beers in giant batches each month, and they while they know the science of brewing, they also know a thing or two about pairing beers with food.

“Don’t be afraid to go outside the box,” suggests Chestnut Hill Brewing Company Taproom general manager Alan Maugle. “Ask yourself what do you like?”

Maugle suggests that first off, beer lovers consider pairing beer regionally with what they are eating. “Look for regional synergy,” Maugle said. “A German lager will have a lot of tasteful notes that will compliment a good schnitzel or wurst.

“Same can be said for light Mexican lagers that have hints of lime and pair well with the fresher, citrusy aspects of Mexican cuisine.”

Next, try a flight of beers and approach the brews as an appetizer of sorts when you are ready to dine.

“Try ordering a flight or taster to see what your brain and taste buds will feel like having with the food you like at a particular establishment,” Maugle said.

And finally, don’t rule out an unusual pairing. Maugle is all for experimenting.

“One of my favorite meal pairings of all time was taking a dark, red ale with lots of hearty, robust flavors and pairing it with a seafood paella,” Maugle recalled. “The flavors wound up being a perfect match for the bold, spicy and fishy paella.”

Like some wines, craft-brewed beer can take on just about any flavor, and the more creative the brewer, the more exciting the finished product.

Nick Gunderson is the Taproom’s head brewer, and he typically keeps about eight to nine beers on tap at any given time. The array is partly to appeal to a variety of palates, but it is also a nod to the foods on the restaurant’s menu.

“People are getting more excited about the non-domestic lagers,” said Gunderson. “If there’s an ingredient, someone has probably put it in a beer.”

Like Gunderson’s peach apricot wheat beer, a perfect “gateway beer” for those who are looking to expand their horizons this spring from white wine to a sweet brew, he said.

Gunderson says that generally, he operates only by a few general guidelines when pairing brews with food.

If you are pairing beer with breads, pastas with light sauces or other carbs, a light German lager is the way to go. The Taproom features a Jaromir Lager named after hockey great Jaromir Jagr that pairs really well with a giant Bavarian pretzel smothered in mustard. Much the same way, the Taproom’s Newfie Nectar is a Kolsch-style beer that is also on the light side with floral aromas. Something like this goes very well with spiced dishes, because the hoppy, floral profile cuts back on the heat of spiced cauliflower or the restaurant’s firepit salad featuring pickled onion.

If you are a meat and potatoes type of person, try experimenting with darker porters or stouts.

“It’s so full bodied and chocolatey and roasty, that you probably want a heartier dish for this one,” said Gunderson.

That means steaks, pastas with red sauces, pot roasts with potatoes, anything on the heavy side, will love a porter. The Taproom is currently featuring Catherine’s Anchor, a Russian Imperial Stout named after Catherine II of Russia that pairs well with the menu’s mushroom toast appetizer with mushroom truffle cream sauce.

For the salad lovers, it might be best to stick with a nice India Pale Ale (IPA).

If you want to play around with beer flavors and try them with different meals, Gunderson recommends buying a mixed pack of cans or bottles to begin your journey. And don’t forget that most of these craft beers need not be served ice cold like the old Bud Light and Coors bottles that filled our fridges in the 90s.

“American tend to serve their beer way colder than anywhere else in the world,” Gunderson said.