The Chestnut Hill Market in about 1930. Owner Sam Blumenthal is at the far left with his young son. by Lois Perch Villemaire Sam Blumenthal was a ladies man. He was handsome, and he knew it. He … 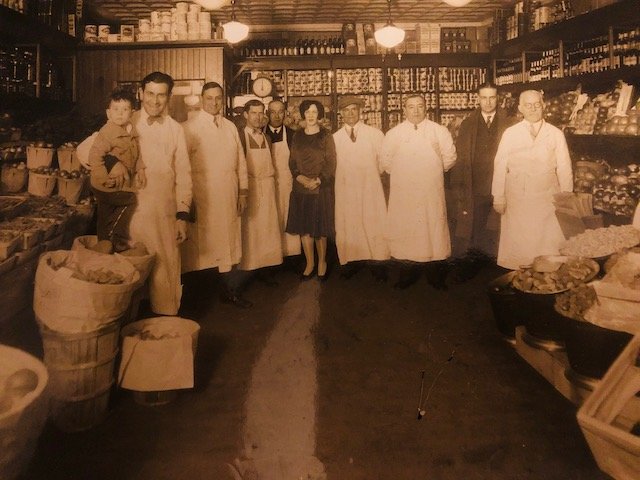 The Chestnut Hill Market in about 1930. Owner Sam Blumenthal is at the far left with his young son.

Sam Blumenthal was a ladies man. He was handsome, and he knew it. He worked at staying in good shape and weighed himself every day like a prize fighter. As a teen, he was on the track team at Central Manual Training School in downtown Philadelphia. He was a stylish dresser and took pleasure in wearing nice clothes.

Sam was neat and precise about his surroundings. He kept his desk immaculate and posted a calendar where he carefully printed his scheduled appointments.

Sam's father was also a good-looking man with dark curly hair and a thick mustache. Everyone thought he had become an alcoholic when he began to stagger and slur his words. Sam was embarrassed by the changes in his father, but at the time no one knew the real reason for his odd behavior.

People avoided him, and his shoemaker business declined. Sadly, this also caused a loss of contact with his extended family. In a matter of months he died when Sam was a teenager. An autopsy revealed it had been a brain tumor. The year was 1912.

After her husband's death, Sam's mother was left to raise five children. She continued his business by hiring a young shoemaker to run the store and compensated him with room, board and a small salary. Sam and his two brothers had to find work to help support their mother and two sisters.

Sam wasn't interested in the family shoe repair business. He got an entry-level position with the Pennsylvania Railroad but soon discovered it wasn't for him. With his outgoing personality, he found it boring to work as a laborer. He gravitated to selling produce and working in a local grocery store, learned all he could about the food business and dreamed of opening his own market in the right location of the city.

He worked long hours, but on his day off Sam enjoyed riding different trolley lines to explore sections of Philadelphia, with its established and expanding public transportation system. One summer day, Sam hopped on the Route 23 electric streetcar that stopped near his home. He planned to examine the northwest direction of the city.

Sam heard foreign voices. and he inhaled the unfamiliar aromas of food being sold from wooden carts. He observed residential, commercial and industrial areas as the trolley swayed, stopped and started up again along the way. The clanging bell was loud and announced each upcoming stop. 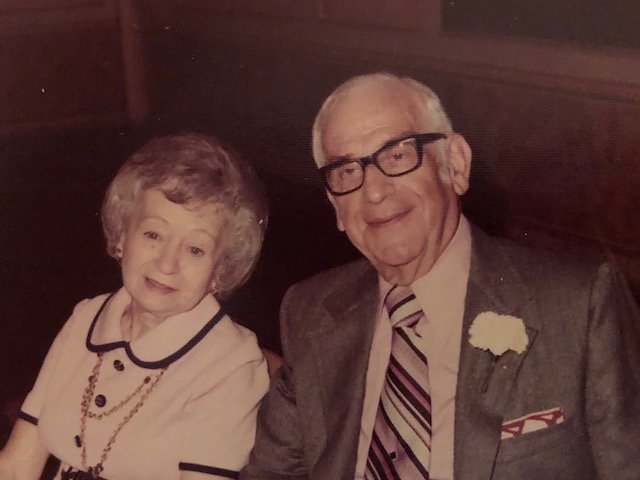 Pauline and Sam Blumenthal in 1971 at their 50th wedding anniversary.

After riding for about an hour, he arrived at the northern terminus where the route of the streetcar would reverse at a loop at Mermaid Lane. Sam exited the trolley and began to walk. It was an uphill stretch called Germantown Avenue. After several blocks, he saw a large three-story hotel with a covered porch, impressive residential dwellings and numerous shops on the treelined street. People were strolling on the sidewalks.

He was in Chestnut Hill. When Sam approached the busiest block of storefront businesses, he was fascinated and even more pleased when he saw a train station. Sam knew that convenience and transportation were important factors in deciding on a favorable place for his store. He became hopeful about the possibility of owning a grocery market in Chestnut Hill someday.

For two years, he worked hard to save money while continuing to help his family. Whenever Sam had time, he rode the familiar 23 trolley and walked up the street to monitor the shops on Germantown Avenue, watching for vacancies. He found out that there were plans for the Route 23 trolley to be extended, continuing to “the top of the hill,” a nickname given to describe the higher land elevation in comparison to other parts of the city. The loop would be located at Bethlehem Pike, a great plus for any adjacent business.

Because he was on the trolley regularly, Sam began to recognize other riders. He became casually acquainted with a petite young woman. In keeping with his friendly personality, he tried to chat with her, but she was shy and reserved. They exchanged a few words, but it never went beyond that. When she left the trolley, she entered a dress shop on Germantown Avenue.

In 1917, Sam opened the Chestnut Hill Market at the location of his dreams, 8512/8514 Germantown Ave. He rented the narrow space from the Still family. When he celebrated his grand opening, the space was jam-packed full of the freshest produce and meats that Sam could find at the farm markets in South Philadelphia. Chestnut Hill had a clientele that demanded the best in food products, and Sam was determined to provide it.

Pauline was the oldest of four daughters, all born in Philadelphia within a five-year span to Jennie and Nathan. Everyone called them the Goldberg girls. Pauline was petite, barely five feet tall with dark brown hair and blue eyes. She was sensitive about her short stature and wore heels whenever possible to add inches to her height. When she was barefoot, she walked on her toes.

Pauline went to public school until she completed the eighth grade. Her older brother Joseph wasn’t home much, or if he was, he was studying because he hoped to become a doctor. Pauline was the one Jennie turned to for help with the younger children. Her sister, Sara, married before the age of 20, but the other three sisters remained single until their 30s. 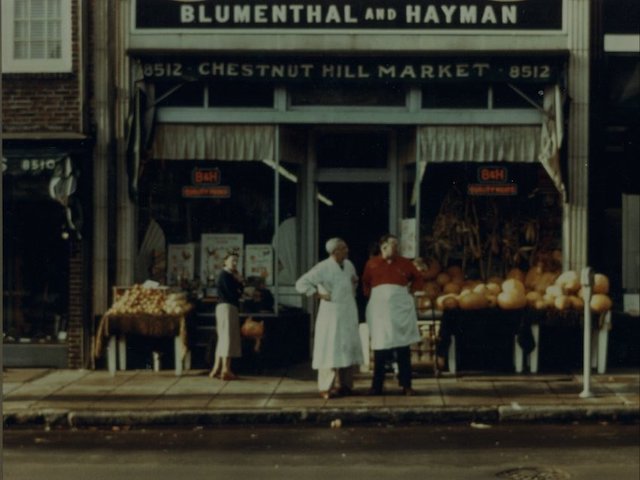 Pauline wanted to please her father. When he suggested that she attend Peirce School of Business and Shorthand to further her education and be able to qualify for a better job, she was willing to attend. In 1910, Peirce created its first secretarial course by combining the existing shorthand studies with business elements, such as accounting and commercial law.

Nathan read about Peirce, and as a progressive man, he knew that women could be a positive entity in the workforce. He wanted his daughters as well as his sons to be well educated. Ahead of its time, Peirce was providing the opportunity for women to prepare for a career, especially when wartime took many young men into the military. Pauline took classes that qualified her as a bookkeeper.

Between working and helping her mother, Pauline didn't have time for a social life. She rode the 23 trolley to work and back home each day. Not many eligible men came into the dress shop where she worked as a bookkeeper.

One customer in particular was Edna Ewing, who was a few years older than Pauline and was married to Tom. Even though Pauline was not a sales clerk, she would often take time to admire the newest dresses, blouses and skirts with Edna. Pauline had a flare for fashion due to her father's years in the garment industry.

Tom was used to Edna's attempts at matchmaking, and he usually paid no mind to getting involved. This time he thought of someone – the friendly, hardworking young man who operated the market near his store.

On April 3, 1921, the family and friends of Sam and Pauline gathered in the parlor of her parents' home on North Franklin Street for the wedding. The guests, including Tom and Edna Ewing, filled the room and spilled into the entrance foyer. Pauline’s young niece peeked down through the ornate spindles of the second-floor hallway. She had whooping cough and was unable to attend, but she caught a glimpse of the excitement as the newlyweds left for their honeymoon.

Afterward, they moved into a brand-new row home at the corner of Ardleigh Street and Highland Avenue, where they lived, one block from Sam’s grocery store for the rest of their lives.

Sam and his partner, Charlie Hayman, expanded and renovated the Chestnut Hill Market in 1934, serving their local clientele until they retired in 1955. In the summertime, groceries were delivered to their customers at the Jersey Shore.

Sam used to say, “I know my customers!”

After the market closed, it became the location for Dorothy R. Bullitt’s dress shop, which operated there until about 1990. Sam passed away in 1974 at age 80, and Pauline in 1979 at age 89. They had two children, nine grandchildren and 11 great-grandchildren.

Lois Perch Villemaire is the granddaughter of Sam and Pauline.