The women of Chestnut Hill College were 5-6 overall a few days before the end of 2022, but won on the road on the last day of the year and then opened 2023 with a victory. 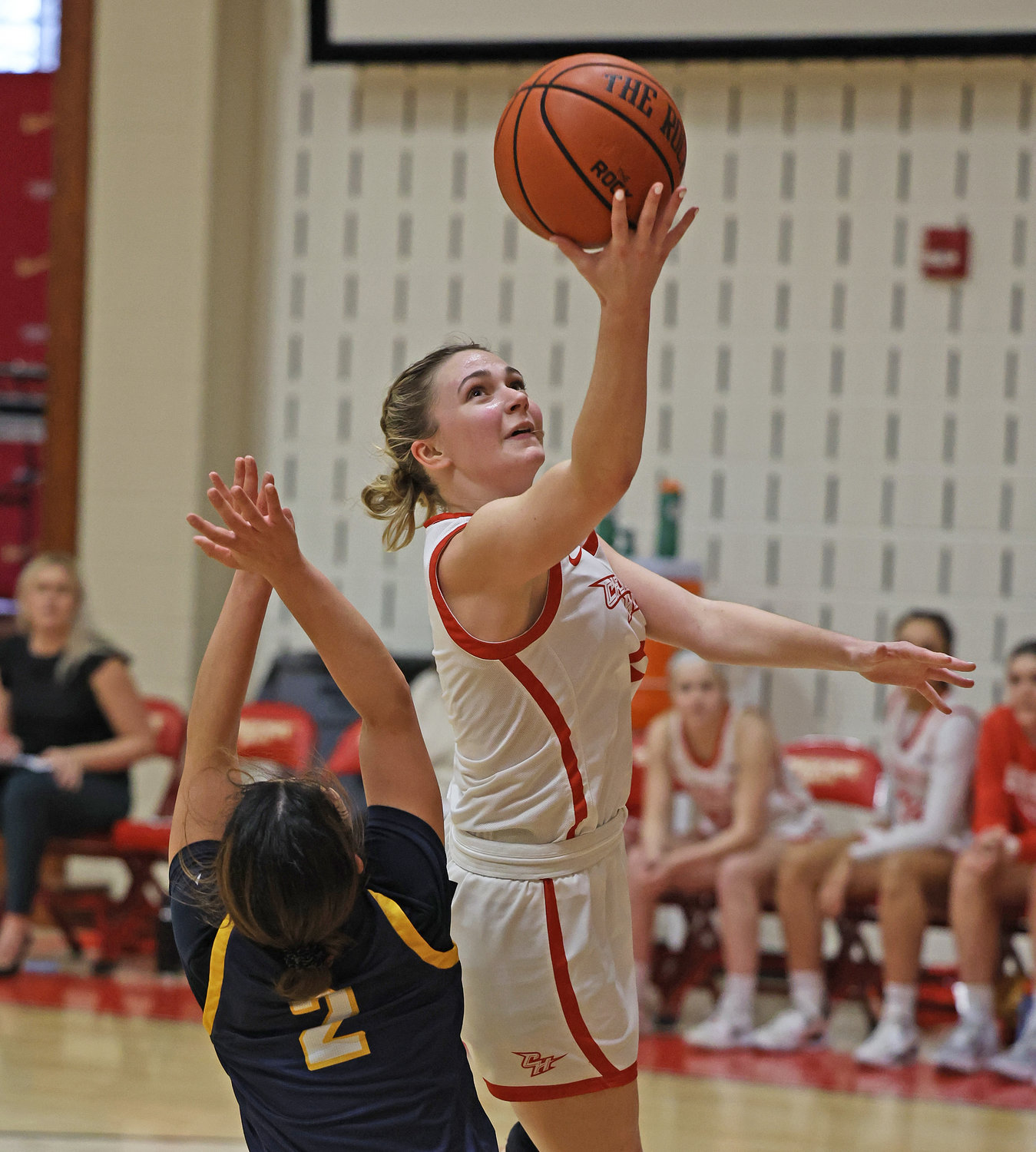 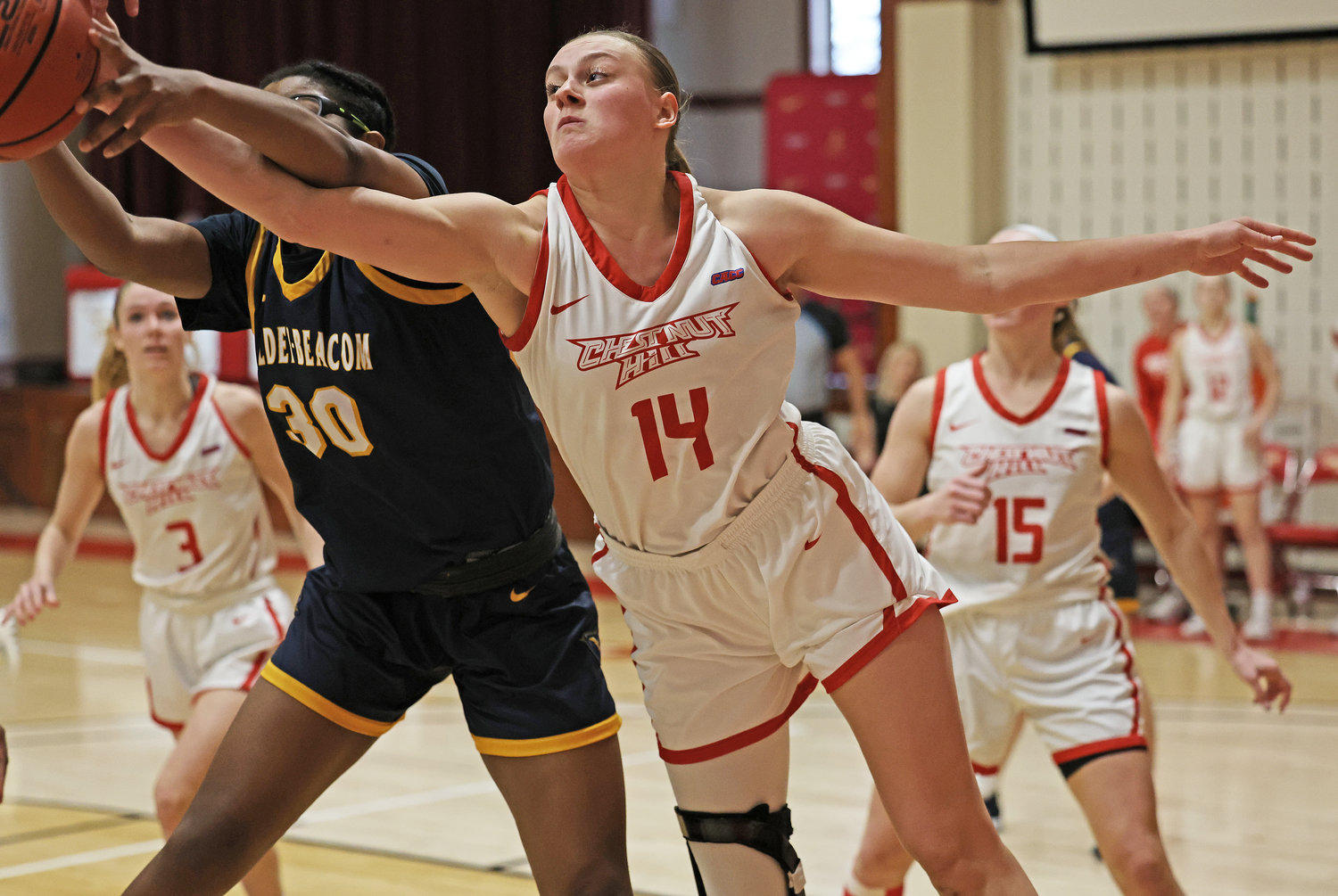 On a rebound, Griffins center Leah Miller (number 14) stretches out to pry the ball away from Janiya Stevens of the Lightning.
Photo by Tom Utescher
Previous Next
Posted Thursday, January 12, 2023 12:00 am
by Tom Utescher

The women of Chestnut Hill College were 5-6 overall a few days before the end of 2022, but they won on the road on the last day of the year and then opened 2023 with last Wednesday's home court victory over Goldey Beacom College.

In their most recent outing the Griffins posted the first four points of the afternoon and never looked back, building a 38-26 halftime lead and continuing on to a convincing 79-52 victory. In addition to climbing above the .500 mark overall, to 7-6, CHC leveled its record in the Central Atlantic Collegiate Conference at 2-2.

The Goldey Beacom Lightning, coached by 2006 Chestnut Hill grad Bethann (Castone) Burke, went back to Wilmington, Del. with a record of 5-9, 2-2. Playing for just 23 minutes, sophomore guard Morgan Sterner poured in a game-high and career-high 20 points, shooting seven-for-10 from the floor and four-for-five from the free throw line.

A game-high nine rebounds, along with two blocked shots, were credited to Penn Charter alum Kait Carter, a junior guard/forward who was one of three Griffins to score eight points in the game. The others were graduate student Morgan Orlosky and sophomore Siobhan Boylan, a transfer from Marist University.

"We got contributions from a lot of players," commented CHC head coach Jim Connolly. "We only had one player in double figures, but we were able to score 79 points with nine three-pointers. We were sharing the ball, and we had 23 assists. We got out and ran and scored easy baskets in transition. That's something we haven't done so well lately, so that was really good to see."

Chestnut Hill was the regular-season champion in the CACC last season, and the team performed well in the Philadelphia/Suburban Summer League. That didn't translate into immediate success when the 2022-23 college season began.

There were a number of personnel adjustments, expected and unexpected. Post player Leah Miller, a potential all-conference player who tore an ACL early last winter, had to be reintegrated into the line-up. Forward Lindsey Lane was studying abroad during the first semester and missed the first dozen games of the season.

One of the net results of all this was that the connections on offense didn't click as readily. The team was playing its usual parsimonious defense, but simply wasn't scoring enough points in some contests.

"Defensively, we've been good all year long," Coach Connelly pointed out. "We've only given up 60 points in a game two times. We've played some really good teams, and many of our losses have been by four points or less."

With three early lay-ups, Sterner helped the Griffins go up 10-3 against Goldey Beacom in the first five minutes of Wednesday's encounter. Boylan bagged two three-pointers as the Griffins built a 20-11 lead by the end of the first quarter.

Sterner kept scoring in the second round and CHC was up by 14 points on two occasions. Late in the period Goldey Beacom had the gap back down to nine points, but with five seconds remaining Carter canned a "three" from the top of the key to lock in a 38-26 halftime score.

By the three-quarter mark the Griffins' margin was an even 20 points, and they cruised home from there. In the end, 11 players made it into the scoring stats, including Miller and sophomores Emily Chmiel and Emily Sekerak with six points apiece, sophomore Bri Rider, with five, and grad student Abbey Spratt and freshmen Sara Tamoun and Avery White, with four points each. White, a point guard, logged a game-high seven assists.

"We've felt all along that our biggest strength was our depth," Connolly said. "We've got plenty of talented players. We've done a really good job of filling in and picking up our teammates when they're injured."