Resourceful Mount basketball gets in three games during break

With COVID's Omicron variant sweeping through the United States, it was something of an accomplishment for Mount St. Joseph Academy to be able to play three basketball games last week.

Resourceful Mount basketball gets in three games during break 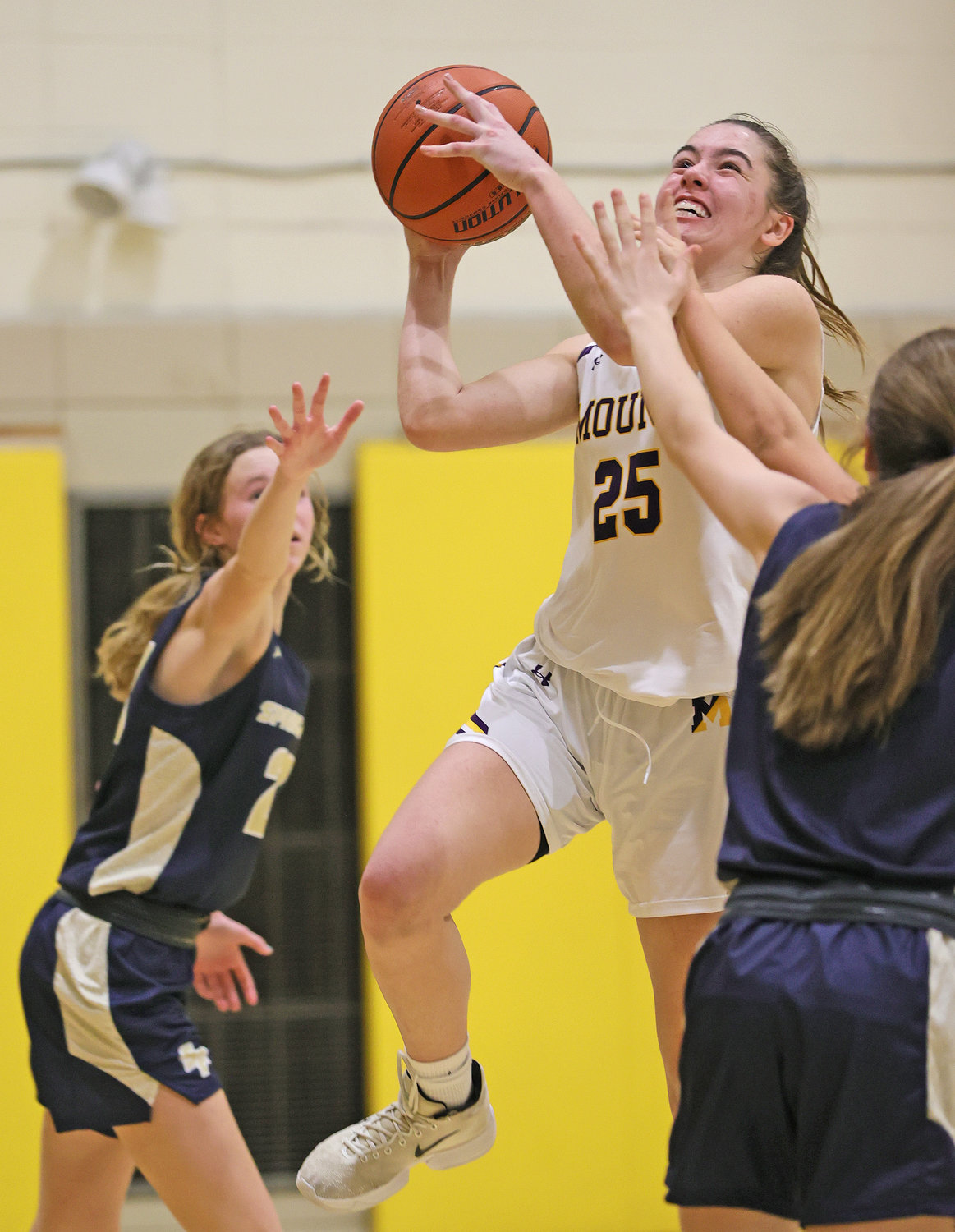 Mount junior Georgia Pickett (with ball) lifts off for a lay-up against Spring-Ford. Photo by Tom Utescher 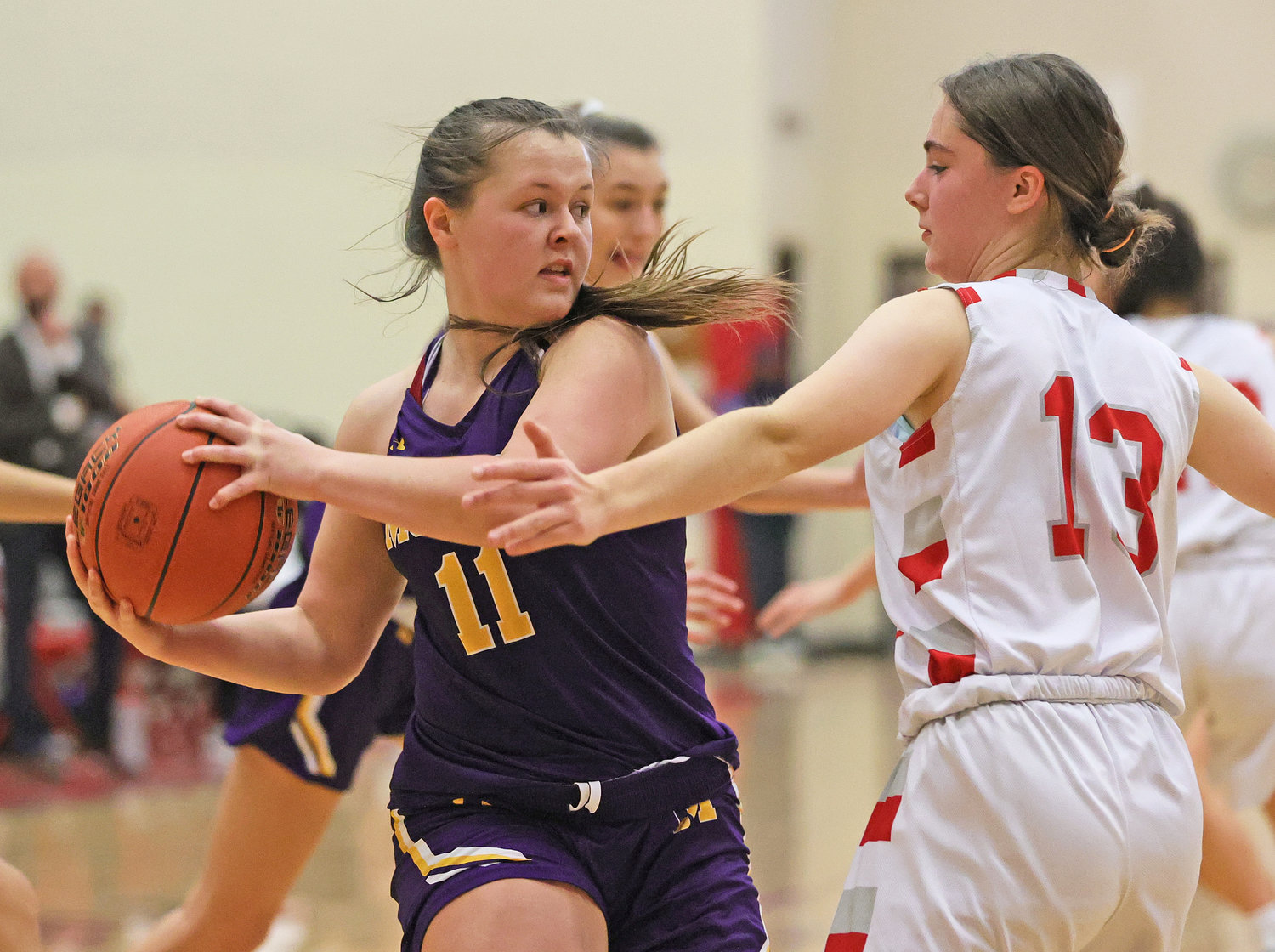 Chloe McGrorty of the Magic (left) keeps the ball away from Upper Dublin's Geena Sarnoski. Photo by Tom Utescher
Previous Next
Posted Wednesday, January 5, 2022 12:00 am
by Tom Utescher

With COVID's Omicron variant sweeping through the United States, it was something of an accomplishment for Mount St. Joseph Academy to be able to play three basketball games last week. The Magic made a good showing against large suburban public school programs, edging Central Bucks East High School, 46-45, defeating Upper Dublin, 46-31, and then falling just short in a late rally against Spring-Ford, losing 33-31.

Mount St. Joe closed out the 2021 portion of the schedule with a record of 6-3 overall, and a 2-1 mark against Catholic Academies opponents that included a one-point loss to Villa Maria.

Two days after Christmas the Mounties were back on their home court, hosting the Patriots of Central Bucks East. The Magic turned a one-point shortfall into a one-point victory over the course of an 18-16 fourth quarter that featured seven-for-nine foul-shooting by the hosts. Juniors Georgia Pickett and Lauren Hoffman led the MSJ offense, with 14 and 10 points, respectively.

A match-up between the Mount and host Upper Dublin was postponed until Wednesday evening. To still get in a game on Tuesday, Upper Dublin invited Bishop Shanahan from Chester County, a team piloted by a former Penn Charter girls' basketball coach, Jim Powers.

On Wednesday the Mounties faced an Upper Dublin squad that had also beaten C.B. East; the Cardinals had won a low-scoring game against East by five points a little over two weeks earlier. The Cards would score three more points against the Mount than they had against the Bucks County franchise, but they were simply overmatched on offense by the Magic, who deposited eight three-point field goals during Wednesday's encounter.

After both teams missed lay-ups at the very beginning, Hoffman got the Mount going with a three-pointer from the right wing, and then she scored a transition lay-up. The Cardinals' quick sophomore guard, Amy Ngo, would hit a pair of lay-ups, but the Magic received additional three-point buckets from juniors Alyssa Martin and Kiersten Pumilia.

Hoffman fed Pickett for a lay-up with five seconds left in the first quarter, and Mount St. Joe then led 13-6. The Mounties tend to foul too much, and they picked up four personals in the opening period, while the hosts had none.

By the last minute of the half, however, the team fouls evened out at six apiece, as Upper Dublin tried to prevent the Magic from penetrating to the basket. MSJ's Chloe McGrorty drew two fouls from the Cards in this manner.

Upper Dublin had its best quarter of offense, with 13 points, but the visitors still widened the gap by ringing up 19. Hoffman bagged three more treys and made two free throws to finish the first half with 16 points. In the final minute, Pumilia canned a "three" from the right corner, then Ngo drove for an Upper Dublin lay-up to set the halftime score at 32-19.

The Cardinals had some stretches when they played tough defense and picked off a number of careless Mount passes, but they often were unable to capitalize on these possessions on the offensive end.

The high-scoring second quarter was followed by a defensively-oriented eight minutes. With a pair of lay-ups, Hoffman rounded out her game-high total of 20 points, but only two other points were scored in the third quarter, as two different Upper Dublin players each made one free throw. It was 36-21 for the start of the final round.

With almost three minutes elapsed in the fourth quarter, the Mounties had added another point to their lead, up by 16 at 39-23. A 7-2 run by the Cardinals in the middle of the period began with a jumper from near the foul line by Ngo. After a time-out called by the hosts, a baseline jump shot by Bliss Brenner of Upper Dublin was answered with a lay-up by the Mount's Pickett, but then Ngo nailed a "three" from the left wing.

With under four minutes remaining, the Cards had pared down their deficit to 11 points (41-30). They would not be able to bring the Mount's margin down into single figures, though, picking up just one point the rest of the way. Martin revived the Magic with a lay-up with 8:51 left to play.

The Mounties had a chance to stretch out the lead over the following minute, but they wasted a fast break opportunity with a walk, and then they missed a pair of free throws.

With 1:24 on the clock Upper Dublin's total was locked in as junior Alaina Sanders made the first of two free throws (the Cardinals had just gotten into the foul bonus). The Mount posted its last three points during the final minute. McGrorty made good off of a back-door cut and then converted a free throw awarded her on the play.

She was second in the MSJ scoring stats with eight points, followed by Pickett with seven, Pumilia with six, and Martin, with five. Ngo scored an even dozen for the Cardinals, with sophomore classmate Aditi Foster contributing six points and Brenner adding five.

Back at the Mount on Thursday, the Spring-Ford Lady Rams arrived with a record of 4-1, their lone setback being a 10-point loss to Haverford High School. Their returning starter at point guard, sophomore Anna Azzara, had been the star of Norwood Fontbonne Academy's Snowball Tournament back in 2020, and she's a product of the same grade school as the Magic's Pumilia.

The Mount junior gave her squad an early 3-2 edge with a trey from near the top of the key, but the hosts were outscored 9-3 in the remainder of the first quarter. Azzara had contributed a three-pointer and two driving lay-ups toward the visitors' 11-6 lead, and she penetrated for another field goal at the start of the second round.

Two made free throws for Hoffman accounted for all the Mount's points in the second stanza, as Spring-Ford assumed a 19-8 halftime lead. Both teams played tenacious defense in the second half, and the Mount prevented Azzara from penetrating the way she had earlier in the game. She still finished with a game-high 13 points, but she had scored nine of them in the first nine minutes of the game.

The Mount's Hoffman recorded seven of her 12 points after halftime, which is when McGrorty scored all of her eight points for the evening.

More than five minutes into the third quarter, though, the Magic faced their largest deficit of the evening, down a dozen at 24-12. Pumulia scored from underneath the basket on an inbounds play, then Hoffman bagged a "three" from the right wing and came back with a lay-up off a pass from Pickett. Lady Rams sophomore Katie Tiffan closed the quarter by making the second of two free throws, but the Mount had cut the visitors' lead in half, trailing 25-19 to start the fourth quarter.

The Magic lost ground during the first three minutes of the final frame, slipping behind by 10, 29-19. Making a nice move in the paint, Pickett freed herself for a lay-up, and the gap was still at eight points after two successful foul shots by McGrorty were matched by the visitors.

The Mounties missed a shot on their next possession, but they created a turnover at the other end and McGrorty cashed in on a fast break. The hosts called time-out, with the score 31-25 with 2:32 left on the clock.

When play resumed, the Magic missed from the three-point loop and then committed their eighth team foul, but Spring-Ford whiffed at the free throw line. With 1:20 left, the Lady Rams' sixth team foul sent Pumilia to the stripe for two shots and she made both of them.

At the far end of the court, it was the visitors' turn to miss a "three," then in transition Pumilia rifled a pass downcourt to assist on a breakaway bucket by McGrorty. It was now 31-29 with 51 seconds to go. The Lady Rams got into their set offense, but an MSJ trap forced them to call time-out with 36.5 seconds remaining.

The Magic fouled the recipient of Spring-Ford's inbounds pass, and the Lady Rams couldn't cash in at the foul line. The next foul, however, was the 10th on the Mount team, and Spring-Ford senior Kamryn Pufko hit the second of her two shots. That came with 21 seconds left.

Later, the Magic missed a three-point attempt and then fouled visiting sophomore Mackenzie Pettinelli when she rebounded the ball. The second of her two free throws went in, making it a four-point game at 33-29. The Lady Rams followed the familiar instructions to back off the three-point shooters, and the final score went up in lights when the Mount's Pickett made a lay-up with two seconds left.

Mount looks for improvement in the second half of January