If there is a happy man in "Cure," it is Odysseus, played with resolution by award-winning actor Joseph Langham. 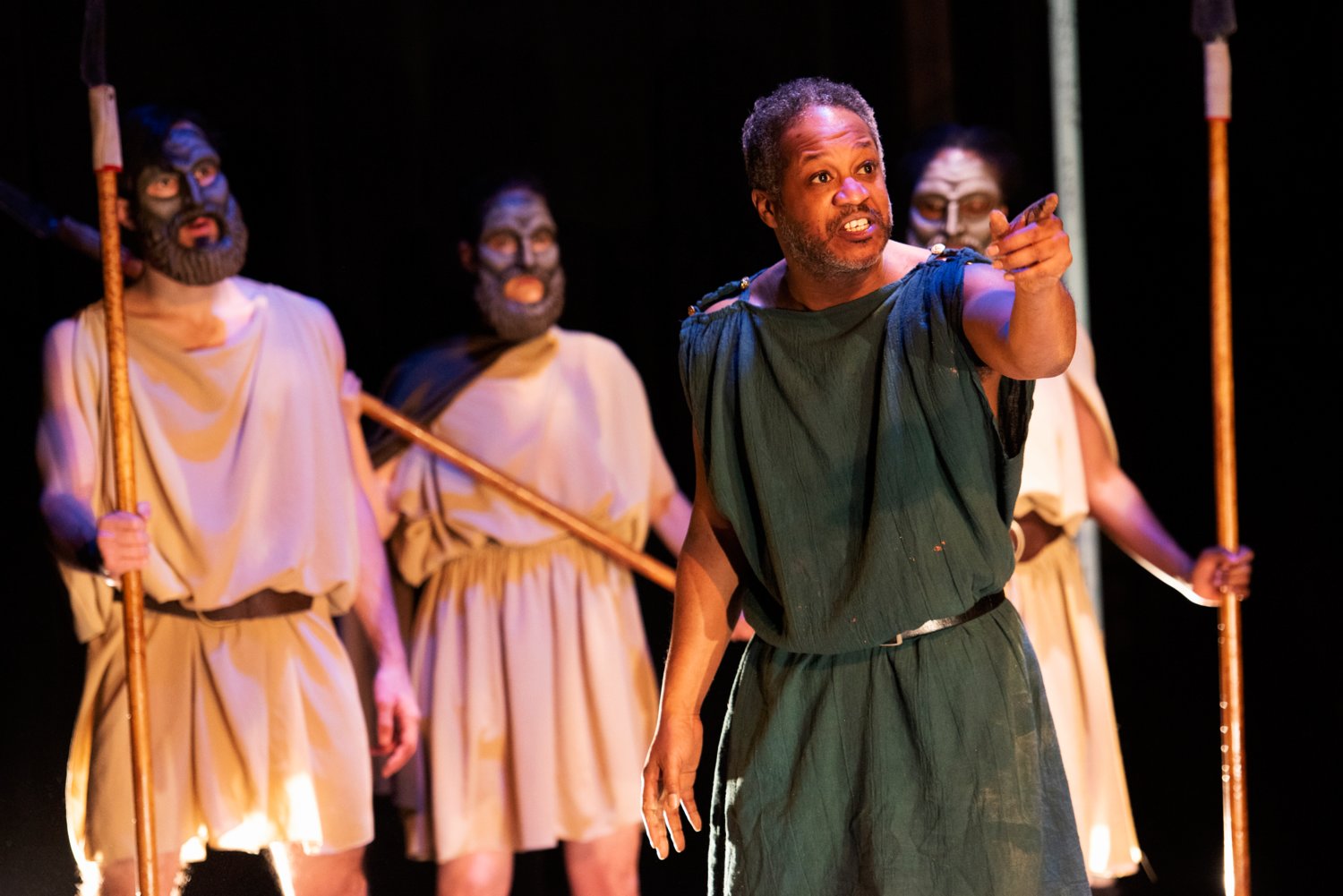 Now playing at Quintessence Theatre, "The Cure At Troy" is a riveting 90-minute play you will never forget. Nobel Prize-winning poet Seamus Heaney reworks Sophocles' drama, "Philoctetes," to reexamine the eternal tension between duty to self and duty to others.

Homer first records the story. In return for lighting his funeral pyre, dying Heracles gives Philoctetes his magical bow and arrows. But when a festering leg wound turns Philoctetes into a military liability, Odysseus abandons the hero on the island of Lemnos. Ten years later, Odysseus returns because an oracle warns that the country needs Philoctetes and his bow to defeat the Trojans.

If there is a happy man in "Cure," it is Odysseus, played with resolution by award-winning actor Joseph Langham. He sees honesty as a good thing. But if deception and betrayal are required to advance the needs of the country, then for Odysseus, dishonesty becomes a moral imperative.

This troubles Neoptolemus, and Bronx-born Jo Vito Ramirez captures his idealistic innocence. Odysseus wants Neoptolemus to be "canny" and teaches the young man how to manipulate the vengeful anger of Philoctetes to falsely gain his confidence. Throughout the play, Neoptolemus struggles to find a way to stay true to his conscience and still serve his country.

Neoptolemus is the focus of the play in terms of formal argument, but it is Philoctetes who commands your attention. Strong-voiced Steven Anthony Wright scares you with the rage that has swallowed up Philoctetes' soul. But when friendship and hope come into play, Wright also makes you feel his character's buried yearnings.

Director Alexander Burns designed the sound and teamed up with John Burkland's light design to achieve dramatic effects, especially when the legendary bow is in danger of changing hands. In combination with the costume design of Jane Casanave and the choreography of the chorus, the show is visually gripping.

Eunice Akinola, Leah Gabriel and Michael Liebhauser make up the chorus. While much of the play's dialogue is straightforward, Seamus Heaney endows the chorus with his most intense poetry, a criss cross between what the characters are thinking and accepted community norms.

Seamus Heaney was mainly a poet, and "Cure," published in 1991, was his only play. Heaney rejected the idea that he was using the play to comment on Ireland's political troubles. Instead, he insisted he wanted to honor the majesty of Greek drama. I suspect the poet was attracted by the universality of the play's high metaphor, a rarity in today's theater.

Heaney does introduce one big difference. In "Philoctetes," the moral conflicts are unmovable until Heracles (now a demigod) arrives. Heaney dispenses with the deus-ex-machina resolution. In his version, Philoctetes draws on inner strength to undergo a cathartic conversion experience. I am partial to the Sophocles original, but the strong Quintessence production convinces you that either play can be intensely dramatic.

Quintessence Theatre is located at 7137 Germantown Ave. in Mt. Airy. "The Cure at Troy" will run through Feb 20. Ticket information is available at www.quintessencetheatre.org