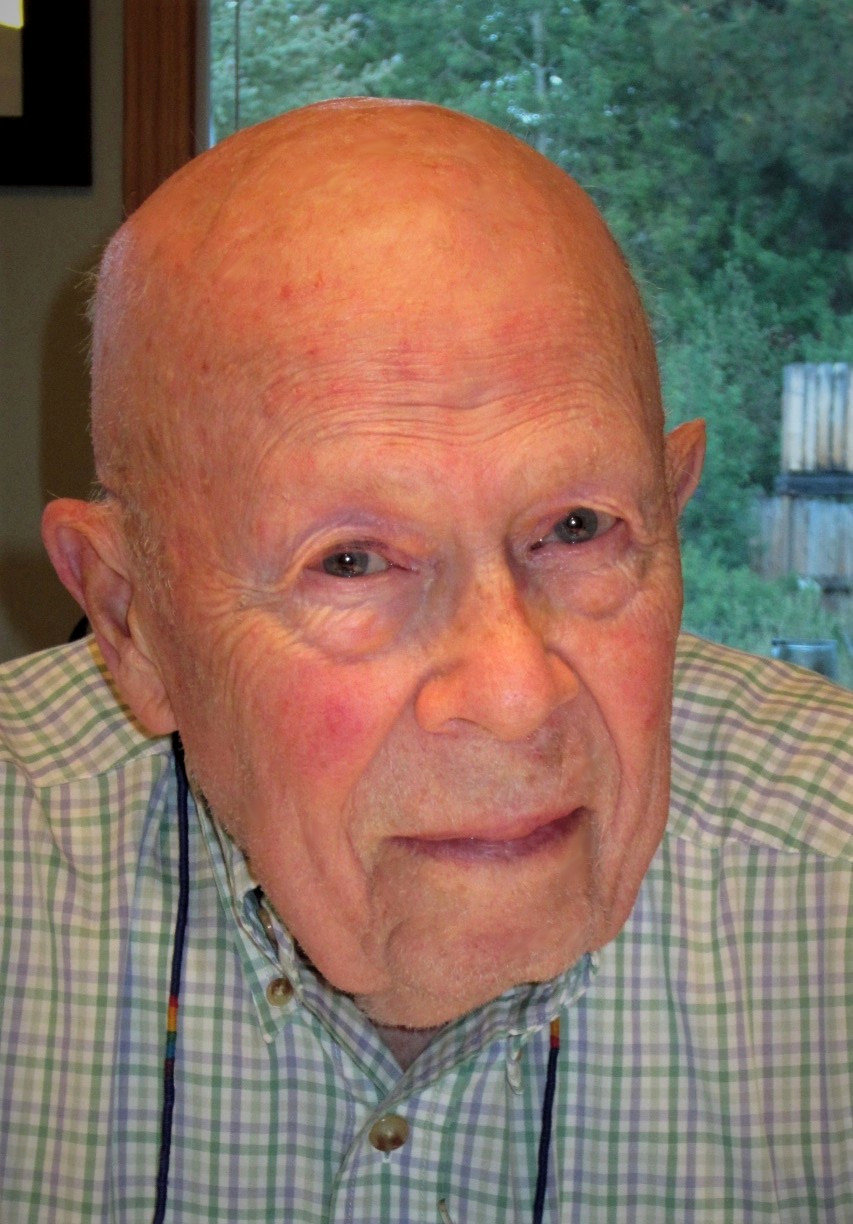 Dick Bansen died on January 7 at age 97. He had been blessed with great health all his life and

experienced a decline in physical health only recently but retained his mental acuity and sense of humor to the end. His life was one of dedication to community and generosity of both heart and hands.

Dick was born on July 2,1924 to Donald Clifton Bansen and Anna Sherwood Bansen. He grew up in Glenolden, Pennsylvania and was the youngest of three – his older siblings were Marjorie Bansen Lockwood and Donald C. Bansen, Jr. Dick was the only one of the three to be born in a hospital. Dick attended the George School in Bucks County, Pennsylvania and then Drexel University. He served as a Sergeant in the Army Air Force from 1943 to 1946 on the crew of a B24; with characteristic good luck, the war ended before his plane was needed overseas.

Dick met Shirley Anne Mutch at a Young Friends (Quaker) function. Shirley’s father was a physician and Dick’s first dinner with his new girlfriend’s parents featured a lively debate about socialized medicine between Dick and Dr. Mutch. Nevertheless, the romance blossomed and Dick and Shirley were married at Green Street Friends Meeting in 1952. They had four children: Peter, Cindy, Sarah and Elizabeth (Lisi).

Dick attended the Wharton School of the University of Pennsylvania while working for the City of Philadelphia and received the Master of Governmental Administration degree in 1958. His career with the City gave Dick the opportunity to work with some notable personalities in the history of Philadelphia including city planner Edmund Bacon, whose vision for the post-war development of urban Philadelphia influenced every project in Center City for decades to come and Police Commissioner Frank Rizzo. While the bombastic Rizzo’s management style was the polar opposite of Dick’s, the two were friendly and carpooled to work daily for years.

After retiring from the City, Dick’s administrative and financial acumen were devoted to Quaker businesses – first at Foulkeways at Gwynedd, a Quaker retirement community in Montgomery County and then with the Philadelphia Yearly Meeting Fiduciary Corporation. Dick resisted retiring from work until he was nearly 80.

Throughout Dick and Shirley’s sixty-one-year marriage, they were active members of Green Street Monthly Meeting of Friends and were devoted not only to the Meeting, but to the school that is under its care, Greene Street Friends School. Shirley taught elementary grades at the school for many years and at any given time Dick and Shirley were each on two or three Meeting committees. Dick’s deep commitment to causes of peace and justice led him to live his beliefs by visiting prisoners and supporting organizations opposing war, racism and intolerance.

Dick was a loving, supportive and fun father and grandfather, a skilled camper and hiker, a craftsman in wood and metal and a singer with a brilliant memory for Gilbert & Sullivan and the ability to offer a song for any occasion.

Although reluctant to leave his West Mt. Airy neighborhood after almost 50 years, when he and Shirley moved to Foulkeways in 2008, he delighted in the ample opportunities for conversation and discussion. He joined many committees and activities, including groups that read poetry to residents in memory care and did play reading. He acted, sang in the chorus, and for many years selected the weekly movie.

Called by some the “Mayor of Foulkeways,” Dick learned the life story of nearly every resident and could recall the most minute details later. Before heading home after a meal in the Foulkeways dining room, he would segue from one conversation or greeting to another, delaying departure by a half an hour or more. He sharpened knives and repaired clothing for fellow residents.

Dick had a strong personal environmental ethic long before it was fashionable. He partially heated with a woodstove and was always happy to help a neighbor remove a downed branch or haul off the wood from a dead tree. In the 1970’s before any formal home recycling began, he would bring home and wash styrofoam cups for reuse after fellowship hour at Green St. Meeting. He delighted in scavenging a Persian rug or piece of antique furniture that had been discarded. The ham bones saved for him by the Foulkeways chef became soup – nothing usable was wasted!

Dick did not let old age dampen his broad interest in the world or in the people around him. His support of diversity and evolving societal mores, such as gay marriage, were inconceivable in his youth. After vacations with family he’d return to Foulkeways with suggestions that the new foods he’d tried be added to the community’s menu (seitan, anyone?).

To his final days Dick cherished the company of his children and grandchildren, and his best friend and fellow Foulkeways resident Penny Purnell. He often punctuated the end of a meal by proclaiming with a puckish grin, “My cup runneth over,” one of the many Biblical references from childhood that salted his conversations.