Varsity, lightweight varsity, and some JV athletes competed, with all of the races for girls staged in the morning and the boys taking to the water around 1:30 p.m. 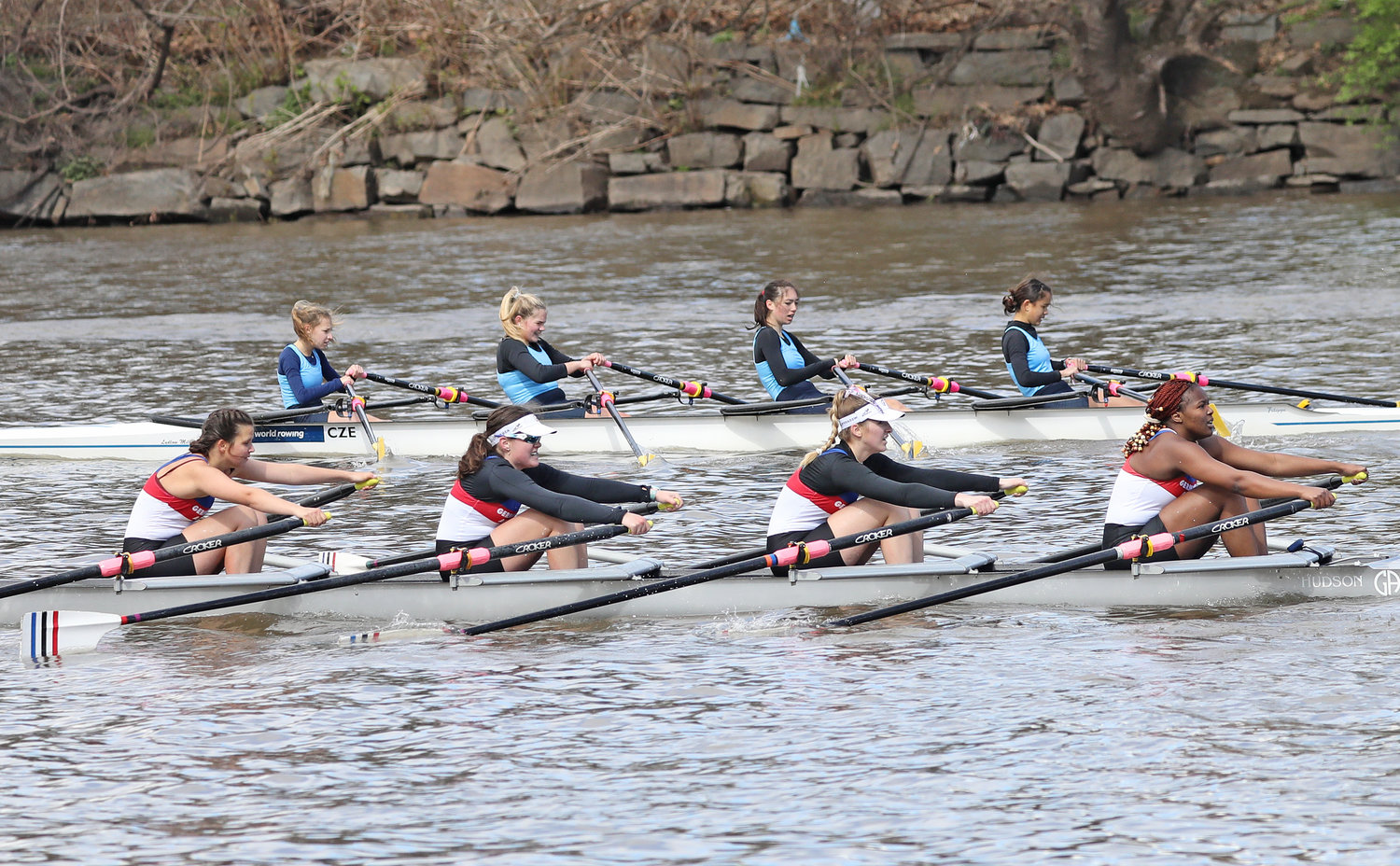 Germantown Academy (foreground) and Springside Chestnut Hill Academy girls battle it out in a quads event. Photo by Tom Utescher 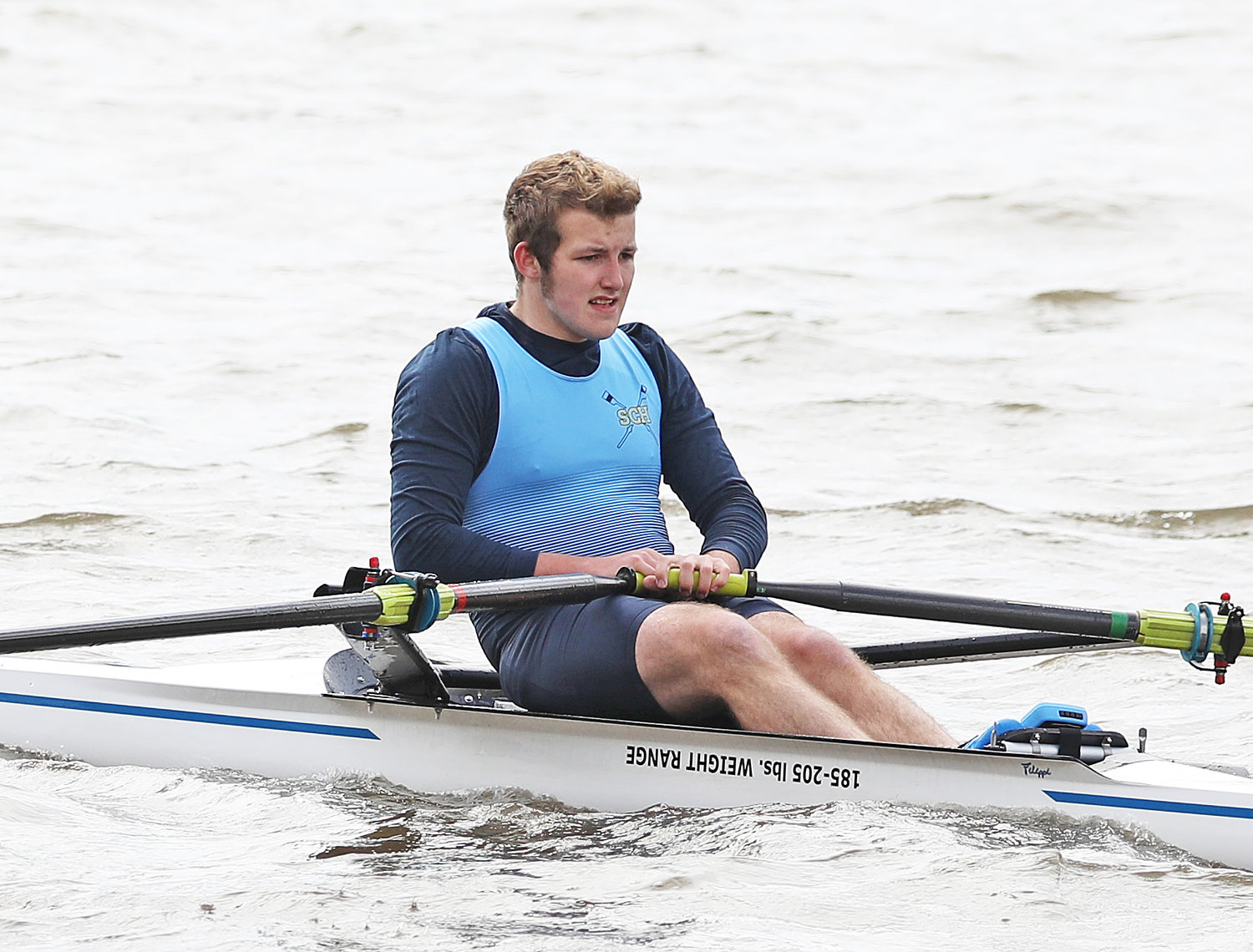 Samuel Halfpenny of the SCH Blue Devils works his way downriver in the varsity single. Photo by Tom Utescher 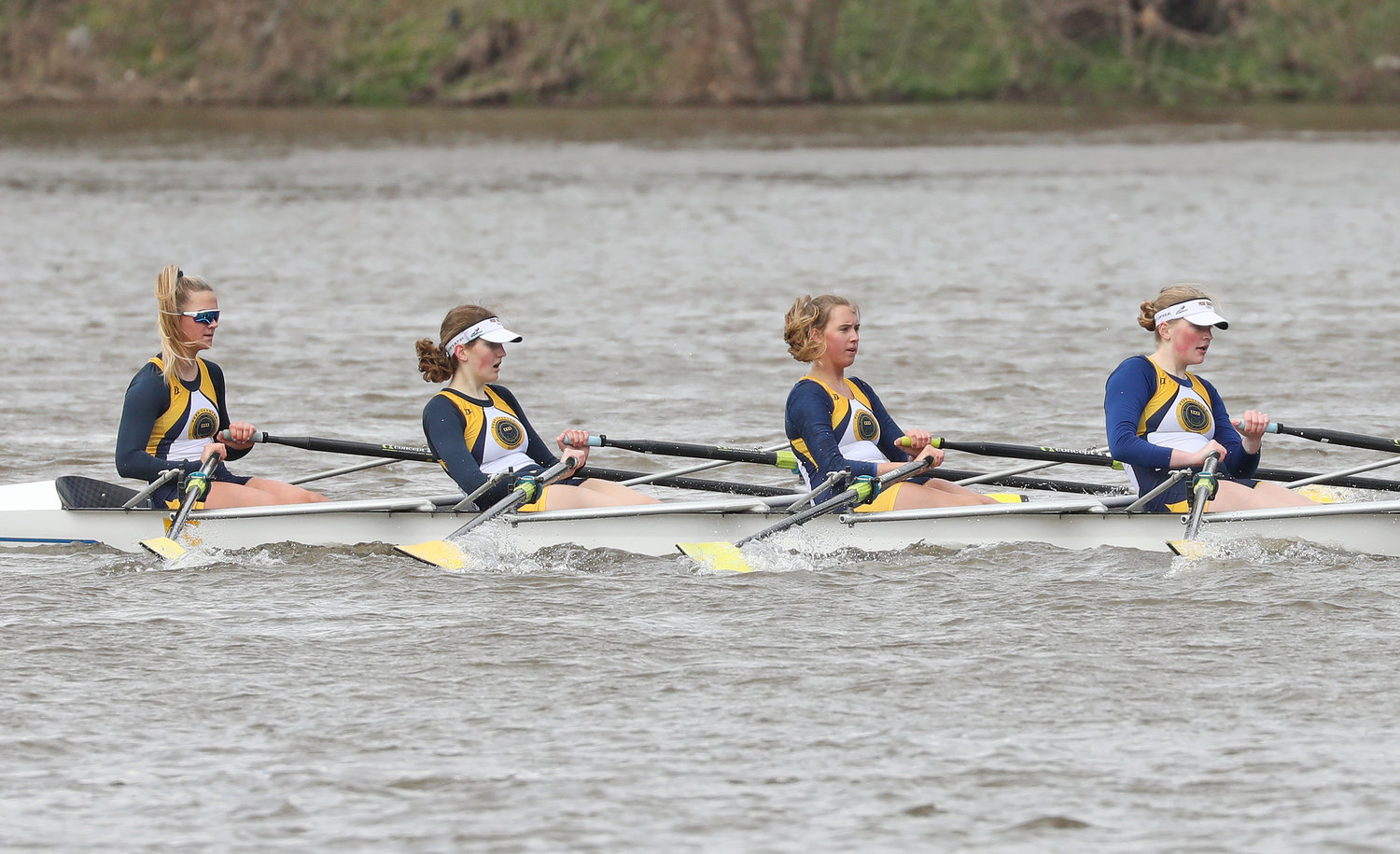 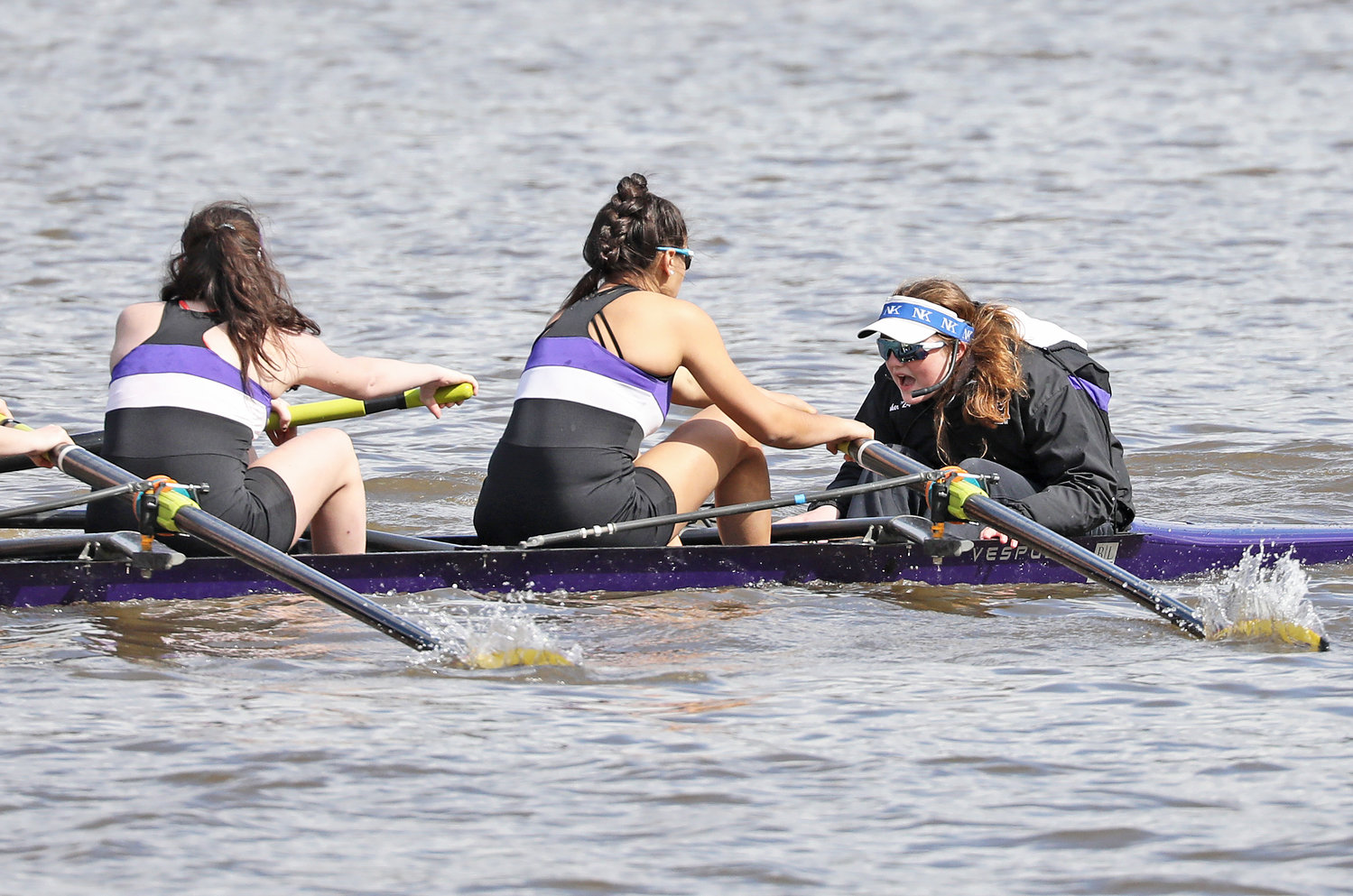 By the time the next-to-last Manny Flick regular-season regatta rolls around each year, high school crews usually have everyone, from veteran rowers to raw rookies, out on the water to race.

Last weekend the weather had other plans. Due to a number of rainy days during the week, the Schuylkill was running high and rushing swiftly alongside Kelly Drive, bearing the occasional log. All freshman and novice events on the river were canceled, and even in the junior varsity divisions racing was called off for one and two-person vessels.

Varsity, lightweight varsity, and some JV athletes competed, with all of the races for girls staged in the morning and the boys taking to the water around 1:30 p.m.

Mount St. Joseph Academy had its JV four in the very first event of the day, and the crew of Maddie Allen (cox), Anna Ledwith (stroke), Kari Prosperi, Julia Fede, and Meghan Krumenacker was the runner-up in the first flight and posted the second-best time out of all three sections.

Given the exclusion of the freshman and novice categories last Sunday, Mount St. Joe reshuffled some of its boats to give the youngsters a chance to compete. One of the two Magic entries in the JV eight event was a boat staffed entirely by ninth graders (Kylie Reichert-cox, Maddie Kristel, Maggie Mullaney, Alexia Levine, Katie Scanlon, Molly Chipman, Zoe Truitt, Vanessa Ksiazek, Ramsey Tabor), and they actually won the first flight in this class.

In the lone girls' lightweight double race, Cara Appleberry and Norah Lee earned second place for Germantown Friends. Next up were Mount lightweights in a four (Sarah Mark-cox, Aoife Meacle, Norah McGlynn, Grace Kyle, Anna Simola), and they logged the fastest time overall as they won the first of two flights.

The two boats dueled down the stretch alongside Peter's Island, with the Magic appearing to make a successful move at one stage but being held off at the end by Wilson, which won by around a second-and-a-half.

The boys of GFS and Penn Charter got going by performing in the fast heat of the JV quad. The Tigers (Joshua cappiello, Luke Lendler, Khalil Dancy, Julian Cheung) landed in third place, one spot ahead of the PC Quakers (Eli Moulton, James Foley, Jack Bowen, Mac Haines).

Aidan Cusack and Otis Harrison captured first place for GFS in the first section of the lightweight double, stamping a time 18 seconds better than the winner of the second flight. In a three-boat lightweight quad contest, SCH (Luca Belmonte, Matthew Leon-Palfrey, Elias Eckert, Sammy Meyer) wound up in the middle, but the Blue Devils were just a little over three seconds behind victorious Conestoga High School and two dozen ticks ahead of third-place Ridgewood (N.J.) High.

The Devils' second-place showing in the varsity quad was more noteworthy, as the SCH foursome (Charles Miles, Jude Halfpenny, Jack Stephenson, Andrew Topping) raced in the faster of two flights and recorded the second-best time of 12 boats overall.

With Easter in the offing, local crews will now have two weeks to refine technique and tinker with line-ups before the final Flick of 2022.