Jessie Jane Lewis (1947–2011) may not be the most famous graduate of Springside School, now Springside Chestnut Hill Academy (SCH), but it is doubtful that any others did more to advance the cause of the handicapped. 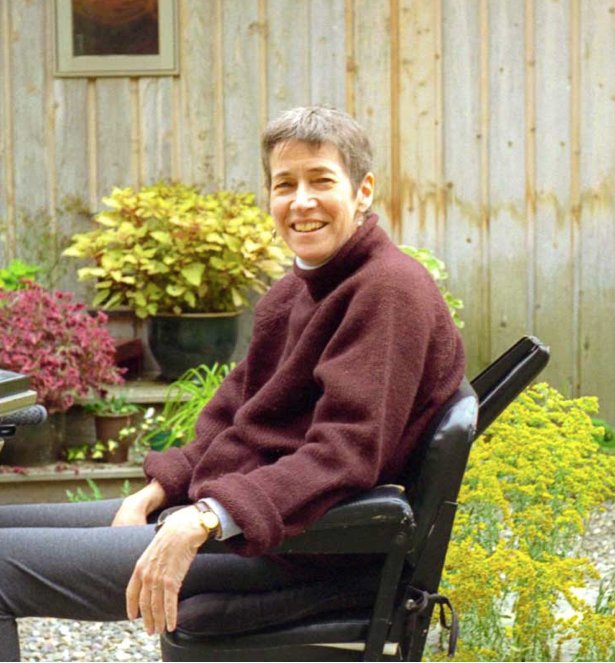 In her later years, Jessie Lewis could often be seen in her motorized scooter and with a smile on her face.
Posted Thursday, January 19, 2023 12:00 am
by Len Lear

Jessie Jane Lewis (1947–2011) may not be the most famous graduate of Springside School, now Springside Chestnut Hill Academy (SCH), but it is doubtful that any others did more to advance the cause of the handicapped.

An artist and disability-rights activist whose offbeat, whimsical works are on exhibit in "Chronic Creativity" at the Barbara Crawford Gallery on the SCH campus until Jan. 26, she graduated from Springside School in 1965.

Growing up, she loved surfing, skateboarding and adventure. After receiving degrees from the former Philadelphia College of Art and the Pennsylvania Academy of the Fine Arts, she worked in painting, printmaking and performance art.

She created profound video work focusing on artists with disabilities, the challenges they live with and how they persevere to maintain their practice. She was a member of the Board of Trustees at Woodmere Art Museum from 1974 to 1978 and worked as an art therapist with elderly and handicapped individuals for more than 20 years. At Woodmere she was also an emerita trustee until 1982. A plaque at the museum entrance identifies it as the Jessie Jane Lewis Foyer.

Laura Richards, of the SCH Department of Marketing and Communications, wrote the following for a recent SCH newsfeed for students and faculty:

“'It’s not how you walk; it’s where you stand.' These are the words of the late artist Jessie Jane Lewis, whose body of work, encompassing painting, printmaking, illustration and performance, only grew after her Multiple Sclerosis diagnosis (in her 20s) and the onset of her symptoms.

“Lewis eventually became a courageous activist for voting rights and ADA accessibility, living out the mission and values of SCH and leading a life characterized by thoughtfulness, integrity and a quest to effect positive change.”

“She ‘lived out loud’ during the most arduous time of her life,” added Melissa Haims, curator of “Chronic Creativity.”

Suffering from the effects of her illness, Lewis protested with a handful of friends to gain ramp access to the Roxborough library in the mid-1990s. Two weeks later, a ramp was installed. She and her daughter, SCH Lower School science teacher Anya Rose, also went on to fight for improved accessible polling places and voting machines.

“Lewis is the reason that every polling location in the city of Philadelphia is now accessible to all people with disabilities,” said Richards, “and every voting machine can accommodate those in wheelchairs, people who are blind or with low vision and people who are deaf or hearing impaired.”

Lewis, who lived in Manayunk at the time of her death from the effects of MS on Feb. 26, 2011, had filed a lawsuit in 2001 with eight other disabled individuals to force Philadelphia to make its voting machines and polling places more accessible to voters who are visually disabled or use wheelchairs. The suit was settled in 2003 when the city agreed to make the changes.

According to an Inquirer article at the time, MS had forced Ms. Lewis to use a motorized scooter, and she had to take her own ramp to her polling place. The settlement required each of the city’s 1,682 polling places to have at least one electronic voting machine equipped with earphones and audio instructions for blind or visually impaired voters.

Ms. Lewis told a reporter that she had cried when she learned of the settlement because “there was so much hurt and so much emotion that was built up.”

Attorney Stephen F. Gold, who represented the plaintiffs, said in a 2003 interview, “It was an issue no one had ever thought about except Jessie. We really have begun to change that culture. We’re now up to 700 accessible polling places, at least. What we settled pretty quickly was the visual part. Now every polling precinct has one machine fully accessible to people who are blind. And every polling precinct has a machine that is adjustable for someone in a wheelchair.”

In 1983, Ms. Lewis was an actress in an installation, “Sophia’s House,” at the Pennsylvania Academy of the Fine Arts. Inquirer art critic Edward J. Sozanski later wrote, “Jessie Lewis was captivating as the serpent in the garden.”

In a 1988 profile, Philadelphia Daily News reporter Dan Geringer called Lewis “the woman who is pioneering the use of video therapy in Philadelphia-area nursing homes ... Artistically, she is a video performance artist whose offbeat studies of subjects range from blindness to schizophrenia.”

Besides her daughter, Ms. Lewis was survived by her husband, Bruce Tepper, and former husbands Robert Melito and Peter Rose.