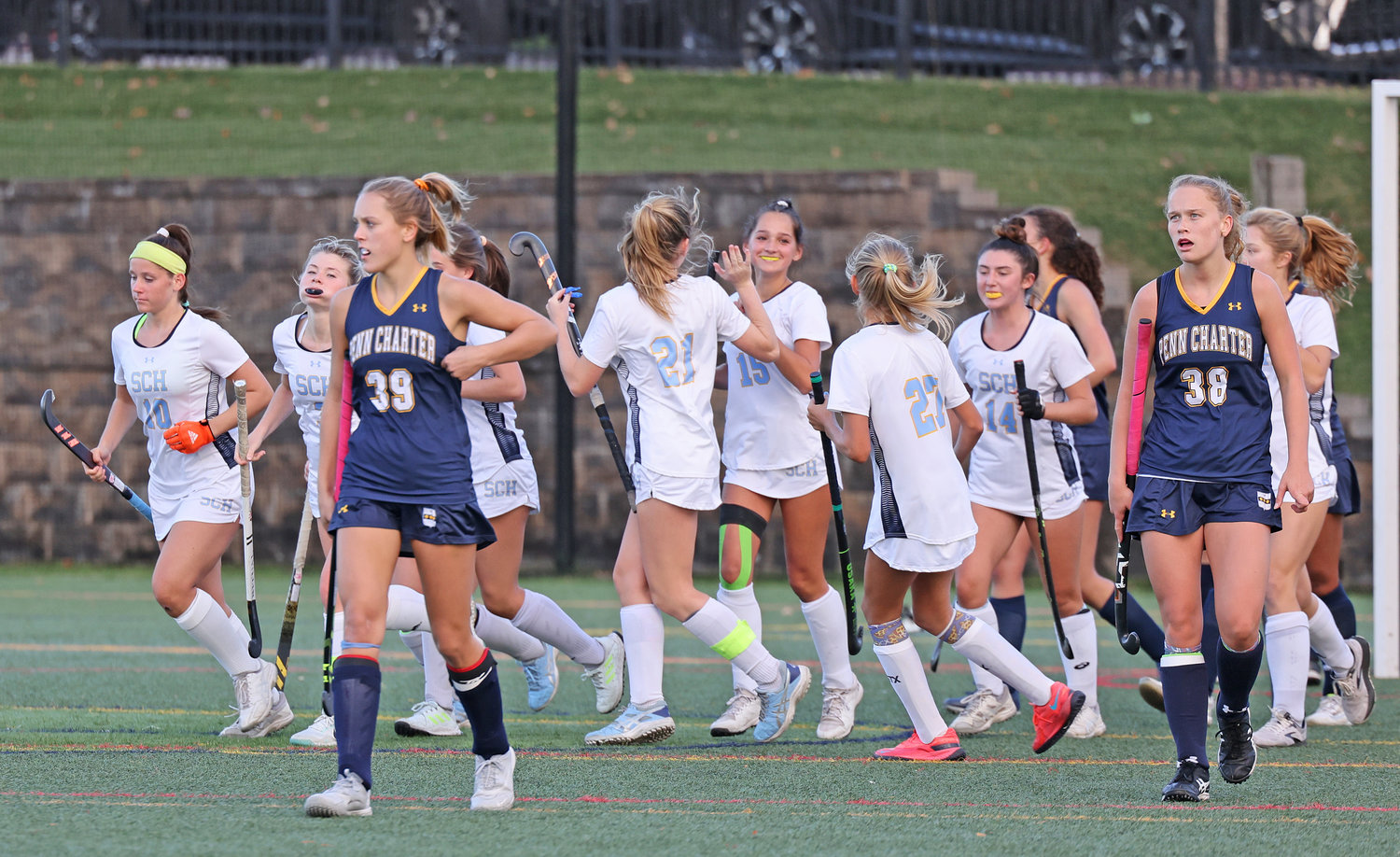 After she scored the final goal in last Tuesday's game, SCH sophomore Kira Vakil (center, number 15) was congratulated by her teammates.
Photo by Tom Utescher 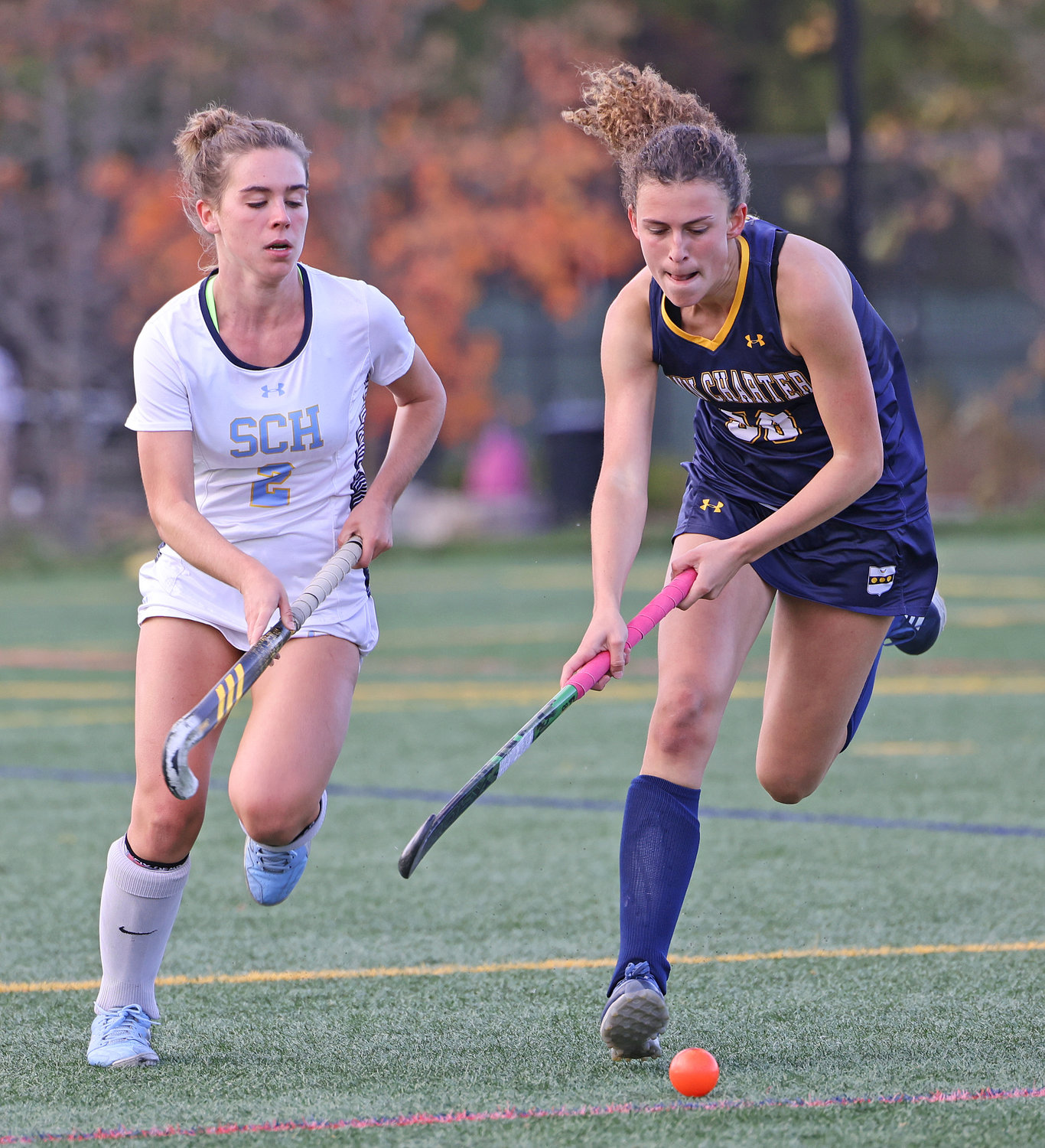 SCH's fourth-year head coach Emilee Ehret and first-year Penn Charter mentor Margaretha "Gretta" Ehret grew up in Wyndmoor. Gretta graduated from Penn Charter in 2005, signed with the University of Virginia, and finished her collegiate career playing for the University of Pennsylvania. Emilee was a member of the Class of 2013 at Mount St. Joseph Academy, and as a college player she helped Penn State win two Big Ten Conference championships.

SCH wound up winning both meetings with the Quakers this year, starting out with a 3-0 victory back on September 22. Last week's rematch was a one-goal game going into the fourth quarter, then the Blue Devils came on late to win by a 4-0 score.

Emilee and Gretta Ehret grew up with parents who were both Division I college athletes, but while there are many similarities between the siblings, the difference in the teams they're currently coaching has a lot to do with the tenure of each Ehret at her respective school.

Gretta, taking over a Penn Charter program that had been changing head coaches every couple of years, is working with the team that was left to her. After last week's game at SCH, PC was 0-5 in the Inter-Ac and 3-5 overall. The elder Ehret can be expected to significantly improve Penn Charter field hockey fairly quickly, as she did with her successful franchise at Merion Mercy Academy from 2016 to 2020.

In the current season, Emilee Ehret is guiding a Blue Devils team that she has piloted since 2019, steadily increasing the number of players for whom field hockey is their primary sport. With the outcome of the second PC match her team was 8-4 overall and owned a 3-5 record in the league, where SCH avenged an early loss to Agnes Irwin by recently beating the Owls 4-1 the second time around.

Last Tuesday visiting Penn Charter pressed into the hosts' half in the early minutes, although the Quakers didn't get deep into the circle. When the Blue Devils counterattacked, they earned a pair of penalty corners in the middle of the period, but got off no threatening shots.

The quarter ended with the score 0-0 after a late shot by PC's Sydney DelBello (a senior who'll play for Johns Hopkins) went wide to the right of the Blue Devils' cage.

The back-and-forth play continued for much of the second period. With five minutes left in the half, Springside got on the board. Settling the ball out at the edge of the circle on the left, sophomore Devyn Conlan sent it in at the goal on a sort of lift/drive. Several players raised their sticks toward the airborne ball, and one of the Devils later noted that the ball deflected into the cage off of a defender's stick.

A burst of offense by Charter near the end didn't produce a tying goal, and the home team led 1-0 at the half.

The Blue Devils came close to scoring an insurance goal just two minutes into the second half, but freshman back Ava Diaz cleared the ball right off the goal line for the Quakers. SCH's Conlan got off a shot from the right side that tracked outside the far post, then she came back with a reversed-stick shot from the left that went wide right.

Conlan's twin sister Colleen, the SCH goalie, made a save near the end of the period and the tally was still 1-0 at the three-quarter mark in the contest.

Between periods, coach Emilee Ehret reminded her Devils that this was an important league game, and at 1-0, a single flukey play could drop them back into a tie with their rivals.

The message seemed to sink in as the hosts deposited a second goal just two-and-a-half minutes into the fourth stanza. Senior Kaitlyn Melinson pushed the ball from near the left post of the PC goal over into the middle, and sophomore Kira Vakil tapped it in.

After a strong SCH shot by sophomore Veronica Goettner deflected off a defender's stick, Charter called time-out with 8:16 remaining. The Devils kept up the pressure and generated a corner play, but PC senior Ashley Bucksar (Liberty University) intercepted a pass and cleared the ball out.

With under four minutes left one of Conlan's familiar reverse shots delivered the ball to the front of the goal, and Melinson was there for the tip-in. The 4-0 final went up on the scoreboard in the final minute, with Conlan once again driving the ball inside and Vakil finishing from inside the left post.